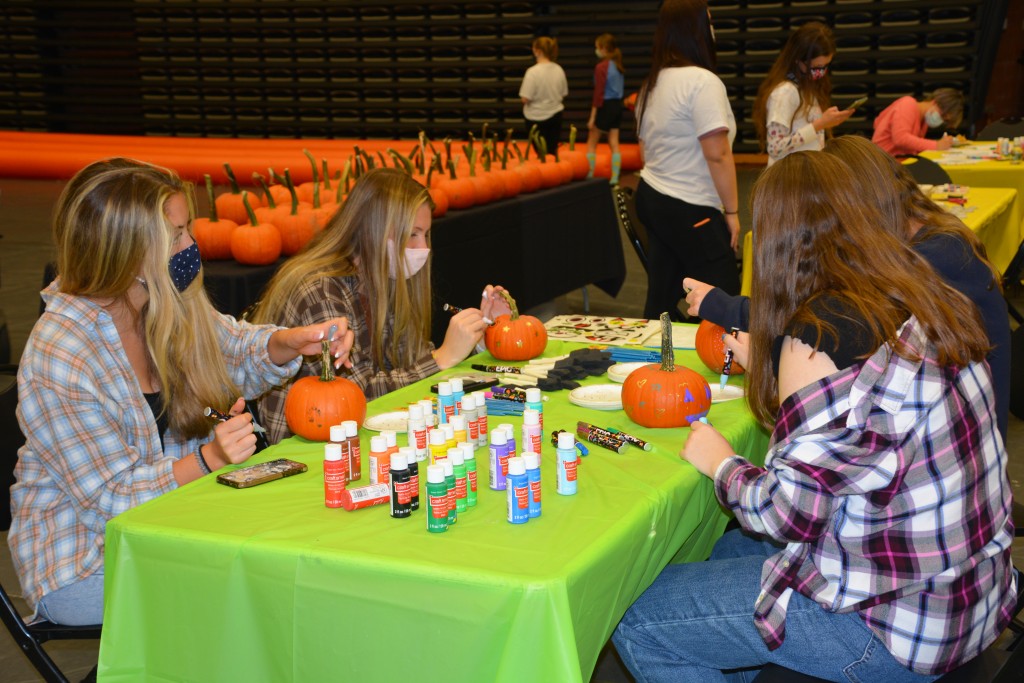 Oktoberfest, the beloved multi-day fall festival hosted by the Student Government Association (SGA), was held from Oct. 14 through Oct. 16. Hopes were high considering this was the first major celebratory event since the start of the pandemic. Between the mouthwatering food, rocking music and lively events, every aspect of the festivities went above and beyond to meet expectations.

On Thursday night, sports fans flocked to Bandshell Lawn to watch the Tampa Bay Buccaneers take on the Philadelphia Eagles. Most attendees came to socialize rather than stay glued to the screen, as demonstrated by how few stuck around for the Buccaneers’ 28-22 victory, but the focus on friendship over sports rivalries only added to the event’s charm.

Friday’s event gave students the chance to enjoy all Fall Frenzy activities in the Bradley Center. Those seeking thrills took advantage of the reopened rock climbing wall, while calmer participants tried their hand at cornhole. The most popular attraction by far was the inflatable, life-size version of Hungry Hungry Hippos, which allowed students to relive their childhoods on a scale never seen before.

Tables and chairs were set up throughout the courts around the DJ booth so students could take a break from the action to enjoy the music. Based on junior law and society major Elizabeth Black’s account of the night, however, attendees were active for the majority of the night.

“Most of our attendees were laughing, talking, and rooting on their friends at the rock wall. We even had quite a few people dancing when the DJ played the ‘Electric Slide' and ‘Cotton Eye Joe.’ It was fantastic to see everybody having a good time,” she said.

As the SGA’s very own secretary of programming in charge of most of Oktoberfest, Black was happier than anyone to see the event become a hit. She did not claim sole credit for the success, though.

“Dining Services did an excellent job with their ‘Best of the Wurst’ menu, which included sausages, hot dogs, big pretzels, and apple cider donuts. I can't thank them enough,” she said.

Saturday was by far the most packed part of Oktoberfest. In the morning, the Center for Student Involvement hosted Family Day, where students caught up with their relatives and shared a continental breakfast.

From there, they headed to the SGA Carnival. From 12 p.m. to 4 p.m., food was delivered to the Bradley Center in waves from local eateries, including Jung Lee’s, Nicky’s Pizza and Deli and Moe’s Southwest Grill.

As soon as participants entered the gym, they were offered a complimentary t-shirt. The white fabric was adorned with the official logo for Oktoberfest, designed by SGA Secretary of Commuter Affairs Dawn Sy.

Arts and crafts stations were set up throughout the room for attendees to paint pumpkins and a variety of wooden decorations that matched the fall theme. Giant inflatable versions of classic games — like skee ball and bowling — towered over carnival-goers. Outside, caricaturists offered their skills.

Inclement weather caused Saturday evening to go differently than originally planned. Alpha Psi Omega canceled the Haunted Mansion, and the College Planning Board turned Glowfest into Tie Dye and Tees. Students who braved the rain and headed to Friends Hall were rewarded with the chance to unleash their inner artist, sample yet another array of delicious snacks and enjoy upbeat music with their friends. Despite some complications, Oktoberfest ended on a high note.

After witnessing so much of her hard work come to fruition, Black could finally relax. “To be honest, I'm a little relieved that it's over,” she said.

“It required a lot of work, and it was not a sole effort. I had a lot of guidance and support from Amanda Riehl and Eddie Seavers in CSI, as well as the SGA Programming & PR Committee. Most of all, I have to thank all of our wonderful volunteers for their help. It's true what they say; nobody achieves anything alone.”