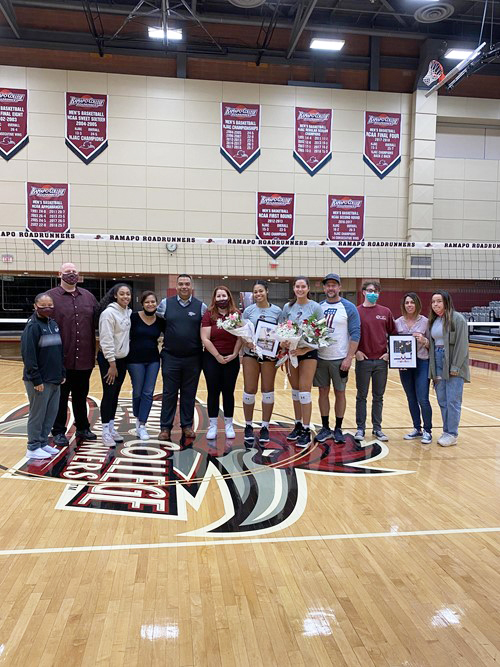 The Ramapo College women’s volleyball team defeated Rutgers-Newark 3-1 on Saturday, Oct. 14 at the Bradley Center. This victory came on Senior Night and pushed the Roadrunners to a 6-12 record on the season, including a 1-5 record in NJAC play. In its four games, Ramapo won three by scores of 25-18, 25-14 and 25-20.

Outside hitter Stephanie Ross led the way for Ramapo in this one with 13 kills in addition to 15 digs and a block. Riley Stewart also added seven kills and three blocks, and Grace Kim had six kills, as well as 12 digs and three blocks.

Team assist leader Alexandra Sacchinelli added to her total on the season with another 17 assists. She also tallied 18 digs and three kills. Hannah McTighe was right behind Sacchinelli in terms of assists on the day as she dished out 16. She also had four digs that day. To round out the statistics for the Roadrunners, Caleigh Golabek posted five kills and six blocks, which led the team on Saturday. On defense, Emma Moran led the team with 20 total digs.

Rutgers-Newark was led by Sharon Sterling, who had 12 kills and 12 assists. She also added two blocks, three aces, and five digs on her impressive day. Alexa Rivera also added 20 digs on defense. However, she did not lead in that category as Saniyiah Richardson had 22, barely edging out her teammate.

With this match falling on Senior Day, the Roadrunners honored the two seniors on the roster — Aniella Bednarz and Ashley Pichardo — prior to the game. The ceremony included the families of both players coming out onto the court, and flowers were presented. Pictures were also taken at the pre-game ceremony.