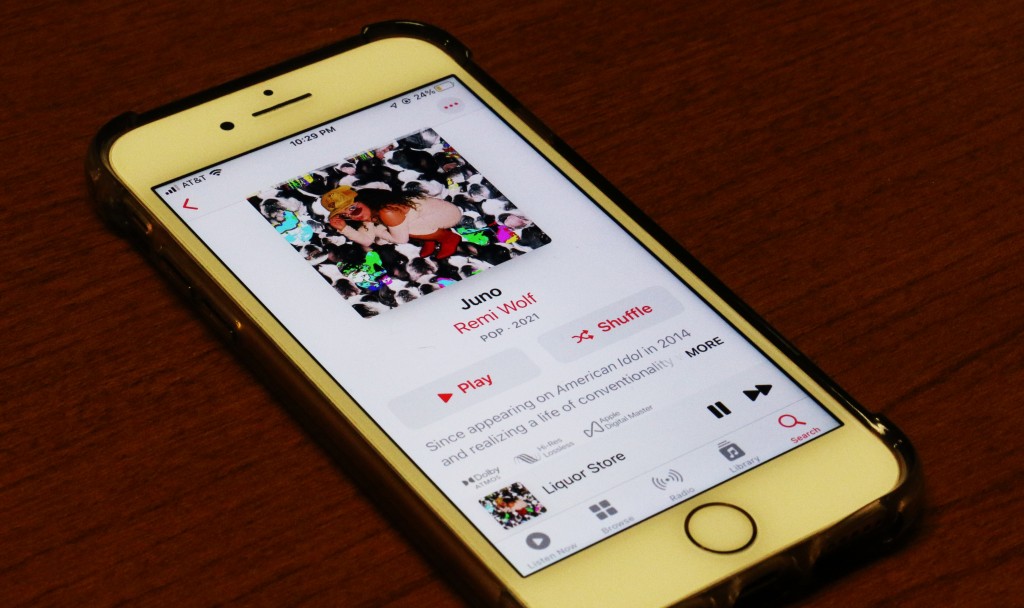 Remi Wolf may be the brightest musician on the rise, and she is already nearly at the top. With her neon, flashy, textured fashionable fits and backgrounds, her music, persona and lifestyle all channel authenticity and distinct taste.

The 25-year-old Californian’s debut album “Juno” dropped on Oct. 15, featuring 13 songs that stand on their own, yet all contain a spice that only belongs to Wolf. The type of music Wolf produces is typically unique and unlike the styles most current artists are making.

With bedroom pop, spunky funk, warped vocals and rhythmic speaking, Wolf’s music takes the best components of the top music genres and wraps them into one. The vocals and instrumentals work hand-in-hand, yet they shine in their own ways when isolated.

“Juno” begins strong with “Liquor Store,” the album's lead single that was originally released back in July. The song was paired with a bright, art-poppy, psychedelic enhanced music video that makes the viewer feel completely encapsulated.

“Liquor Store” specifically references Wolf’s time spent in rehab for alcoholism, but this rather intense topic is masked by the complete groove and bop of the song. Many of her songs express hidden meanings, but it is easy to become distracted by the funky beats and repetitive “oohs” and “ahhs.”

Wolf’s artistic momentum visually and musically invites listeners to continue listening to her music and follow along with the “Juno” journey. In her second track “Anthony Kiedis,” titled after the lead singer of the Red Hot Chili Peppers, the song serves as an ode to the music icon, and it explores a Hollywood-like lifestyle.

My personal favorite of the album is “Grumpy Old Man,” which might be the oddest song on the album, but that might just be why I love it so much. Its chorus is addicting in the weirdest way.

Wolf sings “I got that long hair / long beard / turtleneck sweater” repetitively throughout the entire song, and she eventually sings it in a cheesy country accent towards the end of the song. It is fun and does not fail to put a smile on my face and resist the urge to bust a move when walking around with earbuds in.

Probably her most profound song off the album is “Sexy Villain,” which truly captures the more lustful, slower tunes of a sexy single. The song suggests how it feels to fall for a villainous individual. They sometimes can be enchanting and desirable, even with their evil actions and intentions.

“Juno” overall challenges maturity and Wolf’s personal growth. It is consistent with her earlier works, but it still stands out as her best work yet.

One of the most loving and admirable aspects of the singer’s debut album is its influence. It is named after Wolf’s french bulldog, Juno. Not only is it a sweet tribute, but thematically, it matches the dog aroma the singer has been evolving since 2019.

In her first EP “You’re A Dog!” Wolf highlights the obscurity she finds musical potential in, such as the single word tracks “Thicc,” “Shawty” and “Guy.” The EP soon progressed into “I’m Allergic to Dogs,” which came out in June 2020.

This EP highlighted disco and isolation- fitting for the world’s quarantine era. Almost a year later, in May 2021, a remix album titled “We Love Dogs!” came out, which featured various other artists revamping most of her prior songs.

Now with “Juno,” Wolf’s love for dogs and her career is extremely evident. Her growth as an artist and woman is evident in her music, videos, fashion and public identity. She is a quirky individual to say the least, and she uses her confident humor and chaos to draw people to her and her hallucinogenic world.

Wolf clings to surrealism and individual chaos that fans cannot get enough of. Her popularity is only growing as the days go on, so if you haven’t listened to “Juno” or any of Wolf’s work yet, do yourself a favor and give it a listen. Be prepared to get your groove on and dance your heart out.