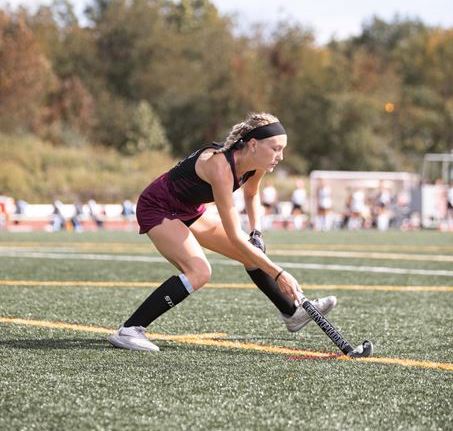 ​​It was another up and down week for the Ramapo College field hockey team as the Roadrunners took down William Paterson University with a score of 4-2 on Tuesday, Oct. 19 but got shutout 2-0 by The College of New Jersey in Ewing, N.J. on Saturday, Oct. 23.

During Tuesday’s game, Ramapo’s Emily Ricciardi and Angela Oskierko each netted a goal, and senior Talitha Joustra was able to score twice. Ramapo was able to dominate the time of possession in this one, outshooting WPU 25-4 and owning penalty corners 21-3. WPU was able to put in two goals courtesy of Kristin Fresa-Papa and Louise Nastasi, but it wasn’t enough as Ramapo earned their third New Jersey Athletic Conference (NJAC) victory of the season.

Both teams received more penalties than usual, with defenseman Tori Waschek and forward Victoria Docherty each receiving a green card and William Paterson’s Megan Hoopes and Kristin Fresa-Papa each receiving yellow cards. “This was a pretty insane game, but we came out strong right away and fought together as a team until the very last second,” said Joustra.

Joustra’s performance earned the forward NJAC Offensive Player of the Week honors, joining Victoria Docherty as the only Roadrunners to receive the award this season.

On Saturday, Ramapo’s good fortune came to a halt as the Roadrunners got shut out at TCNJ. The Lions’ Sophie Popp and Mia Lanzilotta each scored in the second and third periods respectively, giving TCNJ a tiebreaker in the playoff over Ramapo. The Roadrunners could not generate much offense throughout the game, as they were held to just five shots throughout all 60 minutes of gameplay. Freshman goalie Michelle Kukan continued her strong rookie campaign, however, saving five of the seven shots on goal she saw all game.

Although the result was not what Ramapo wanted, the team was able to secure an NJAC playoff spot for the first time in program history. On top of that, the National Collegiate Athletic Association (NCAA) Field Hockey regional rankings placed Ramapo as one of the top six teams in Region IV, also marking the first time in program history the Roadrunners have a ranked team.

Before the playoffs begin, Ramapo has one more game. It will be Senior Day for the Roadrunners, honoring the seniors playing in their last regular season game on the team. They will host the Misericordia University Tigers at the Athletic Center Turf in Mahwah, N.J. on Saturday, Oct. 30 at 1:00 p.m..