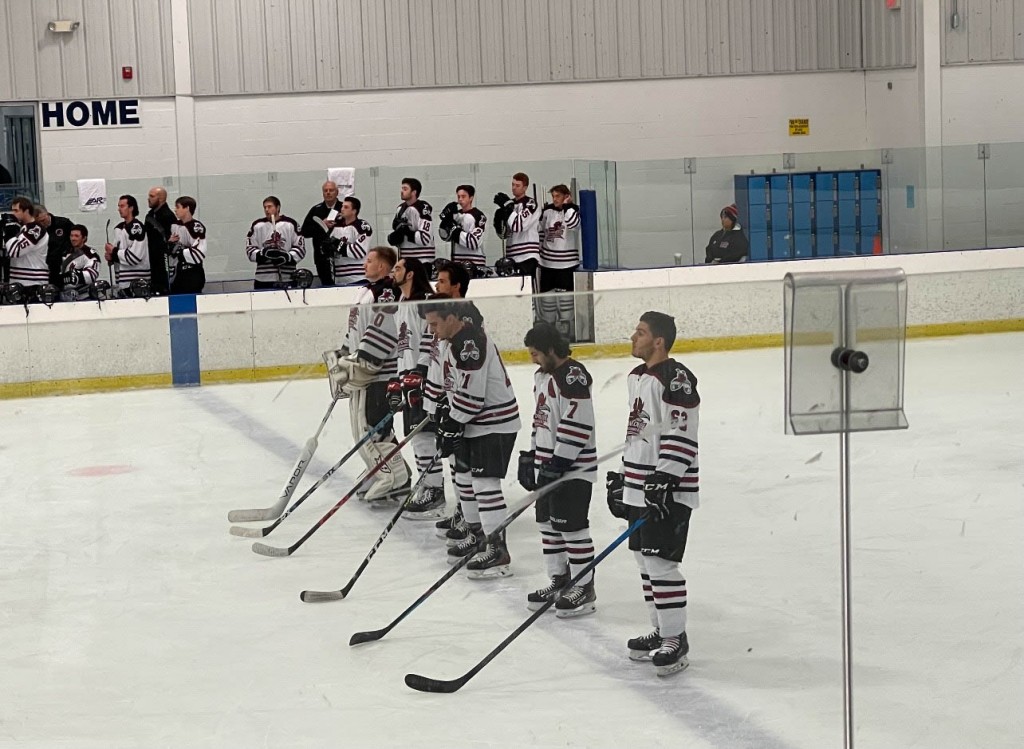 Three periods and five minutes were not enough to decide Ramapo’s Saturday night rematch against Hofstra at the Ice Vault Arena, as the game ended in a 1-1 tie, moving the Roadrunners to a 2-0-1-1 record on the season. Though Ramapo still has yet to surrender a regulation loss this season, this game was filled with missed opportunities and second chances for each side.

Hofstra goalie Spyridon Markoulis had an outstanding game in net, saving 53 of 54 shots on goal, including multiple odd man rushes and enduring four Ramapo power plays. Ramapo goalie Dennis McGarry had another exceptional game in net, allowing one goal and saving 37 of 38 shots from Hofstra.

Ramapo came into this game as heavy favorites after taking down Hofstra 6-2 on the road on Oct. 10th, but were unable to break through Hofstra’s physical, hard hitting defense for a second time. Ramapo’s lone goal came off the stick of junior defenseman Rick Kimble 12 minutes into the second period, assisted by forward Gary Ragusa and defenseman Holden Gruber. The Roadrunners held the lead until five minutes into the third period when Hofstra’s Christopher Yonkers scored off an assist from Matthew Cosola.

“We got off to a slow start in the first but as the game progressed we improved," said Rick Kimble postgame. "We had lots of scoring opportunities but we couldn’t seem to capitalize on them.” Ramapo’s 54 shots on goal were their most in a single game this season, despite being held to just one goal, the first time this year that has happened.

“You have to give a lot of credit to their goalie stopping 53 of 54 shots,” Kimble continued. “We have to find a way moving forward to get two points out of games like that.”

Looking ahead, Ramapo has a break from games during the upcoming week. After that, they will take on Farmingdale College on Nov. 6 at home in Wayne, N.J.. This game will be Ramapo’s third out of four straight games at the Ice Vault Arena.

Ramapo, though the only remaining undefeated team in regulation in the Empire division, currently sits in fourth place with five points. Fourth place might not be where the Roadrunners envision themselves at the end of the season, and the main reason they find themselves there right now is due to the lack of games played. The top two teams in the division, Quinnipiac and Fairfield, have each played double the games Ramapo has. Regardless, Ramapo needs to figure out a way to get two points out of a night like last Saturday, as their last two games have ended either in, or after, overtime.