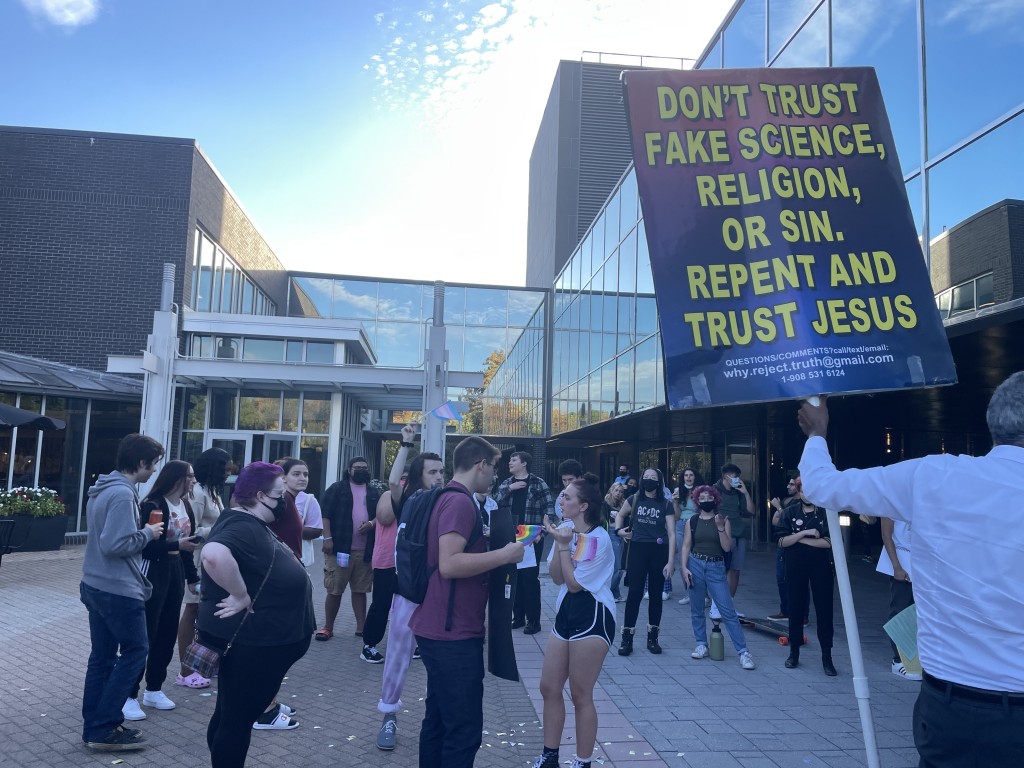 Ramapo College is a public campus, meaning that anyone who has gained permission can visit at any time. This includes a demonstrator who identified himself as Stanley John and came to campus Thursday, Oct. 21, carrying a sign with the message “Don’t trust fake science, religion, or sin. Repent and trust Jesus.”

John stood outside the Atrium for approximately six hours, which one student noted as a yearly occurrence. Junior film major Julia O’Toole said they and their friends spoke to him, and were upset by the conversations they had.

“It started to derail when I heard from one of the people talking that he was equating being gay to animals,” O’Toole said. “He said, and I quote, ‘we are all born with sinful nature and it is our job to reject that,’ when my friend, who is a gay man, said what do you think of people who are gay.”

John says that his message is not meant to hurt students, but that he hopes to help them by coming, and spreading his belief that all people need forgiveness from God. He did, however, speak to several students about his beliefs on being gay.

“It’s not against me they are doing something, it’s against the teachings of Jesus, against the God they are doing it,” John said. “He said, ‘In the beginning God created a male and a female, and God joined them together as one.’ This is a design God had for us and anyone who acts against that, it is they are violating God’s law, there will be a penalty, a punishment for that.”

Students rallied around John over the following hours, bringing speakers, pride flags and signs of their own. Some read “Gay is OK,” and “I love science,” while others made light of the situation commenting “I just wanted to look stupid too.” Junior film major Allie Higgins said they were proud to see students form a sort of protest.

“As hateful as this is, I think it’s bringing everyone together, like we’re all hating on him and I just think it’s amazing that community can be bred through this hate,” Higgins said. “I just met a lot of friends and I’m very proud of this, not of him, but I’m proud that everyone is coming together and spewing facts back at him.”

The crowd also brought speakers, playing lively music and dancing. Some students continued to speak to him, but others chose to approach him with their significant others, showing pride for their queer identities.

O’Toole questioned why John was allowed on campus, and went so far as to call public safety herself. Public safety confirmed that he had acquired a permit to be there. Another question arose as to why John, as a visitor, was not required to wear a mask, as it was to many students’ understanding that face coverings were required for all guests.

John declined to comment about his vaccination status. He did indicate that he does not get regularly tested. “I will do everything within my ability not to spread to them,” John said, bare-faced. “If I am a healthy person, I am not spreading anything to anyone.”

Covid safety was among the concerns gathered students had, but others indicated that the messages John was spreading may be harmful to students’ mental health.

“​​For a campus that preaches about equity, diversity, safety and comfort, this guy is providing none of those things,” O’Toole said, “standing next to a sign that says ‘stigma free campus.’”

O’Toole said they plan to continue having conversations with school administration regarding John’s visit. Despite how hurt many students were, they did not back down until John packed up. The crowd chanted “Don’t come back,” and cheered as he left. The assembly highlights the community strength at Ramapo, and students’ ability to come together for what they believe in.

“I’ve just been trying to keep to energy up, it’s so much fun. The dancing, the kissing, the hand holding, everything,” Higgins said. “I hope he knows this is a loss.”