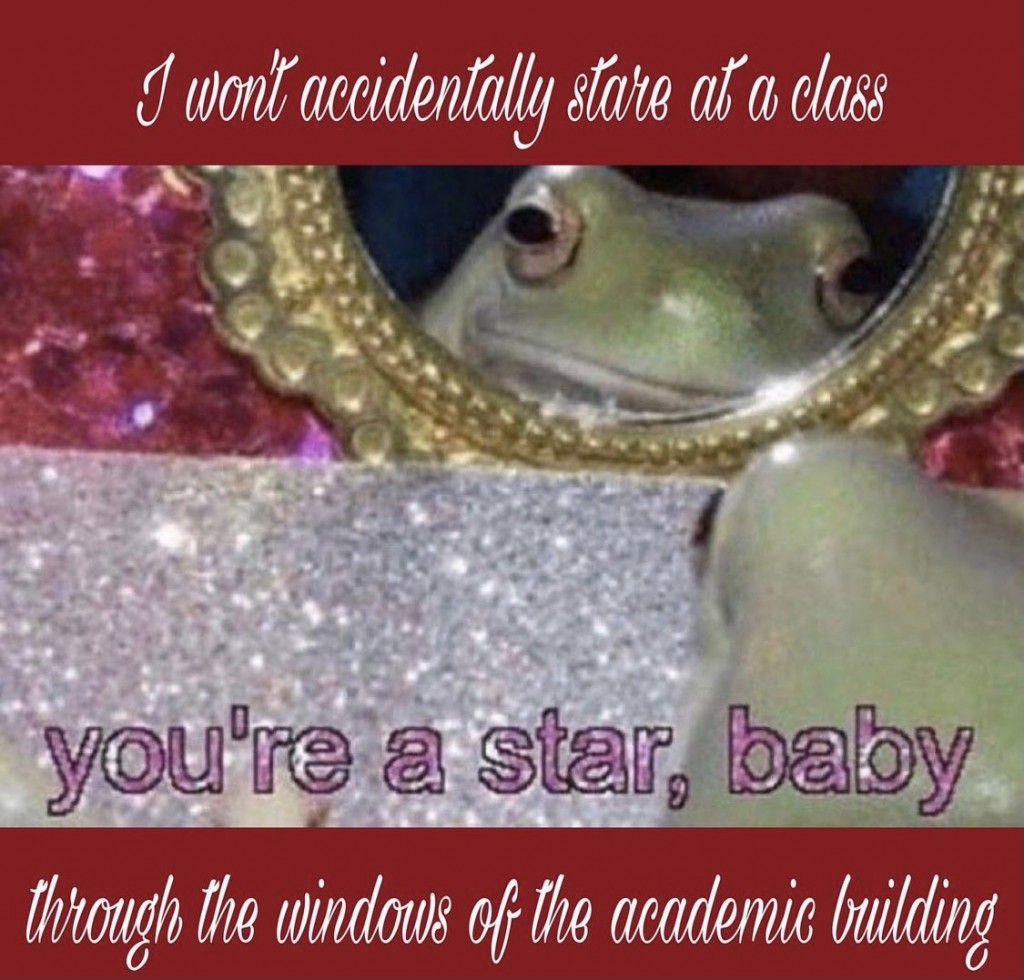 One of the latest internet memes is creating illuminating affirmation posts and sharing them on Instagram and other social media platforms. These posts are positively ironic, as they suggest an odd, empowering statement that one can claim for their day. The posts are paired with flashy images — sometimes relating to the affirmation, sometimes not at all.

A recent take on the affirmation meme chain is college and university students unofficially creating pages for their schools, memeing the intricate inside jokes only members of that campus would understand.

Rolling Stone Magazine shared in an article on the phenomenon of affirmation posts that these are “a very specific and unifying aesthetic, which can best be described as Lisa Frank meets early-2000s-era Perez Hilton meets seventh-grade graphic design projects.”

The influence of Y2K on Gen Z’s entire aesthetic has been incredibly overwhelming, impacting the way teens and young 20-somethings dress, interact with one another and embrace their humor.

With meme culture’s powerful ability to become mainstream almost instantly, it wasn’t long before thousands of affirmation pages were being made across social media.

Memes featured on the Ramapo-specific account include images edited in a quirky way with random, yet relatable, statements. In most of the captions, the user writes “like to claim,” expressing that if someone likes the post, they will experience whatever the affirmation is.

Especially over the past year, there has been a significant rise in mainstream spiritual practices. People on apps like TikTok share their personal experiences with connecting themselves to the Earth, their higher selves and positive thinking.

Affirmations are statements of self-empowerment. You can claim your intentions and positive energies, setting yourself up for meaningful success.

Use of daily or monthly affirmations are highlighted as a valuable thing. But of course, in this day and age, nothing can be done without a joke being made out of it.

“I’m so surprised and grateful that so many people like and share my posts,” said the owner of @ramapo_affirmations, who has asked to remain anonymous. “I really did not expect it to take off at all.”

It started out as just a few likes from the user’s friends, but the account soon began to gain traction, likes and reposts from current students and alumni.

“I usually just think of universal experiences for Ramapo students that typically go unspoken,” the user said. “For example, how everyone checks themselves out in the academic building windows.”

This is the post that gained @ramapo_affirmations their most attention. Thanks to Instagram’s share to stories feature, many Roadrunners were able to find out about the account and get a laugh out of it, and most likely share it on their own story.

“It really makes me laugh that so many people share my posts,” the student said. “I just think it’s funny, especially when classmates and acquaintances share my posts when they don’t know it’s me who runs the account.”

The secrecy of the account almost makes the experience more enjoyable. Followers are presented with hilarious, relatable memes from a person they don’t know. Despite that, they feel connected as a Ramapo community and amused by the jokes posted to the account.

“I don’t know if I would say I’ve built a community at Ramapo, I just make silly little jokes and edit pictures and post them,” the account owner said. Many students are still actively following the account, anticipating the next affirmation post.

Acts like these are small and silly, but they are meaningful and brighten Roadrunners’ days.