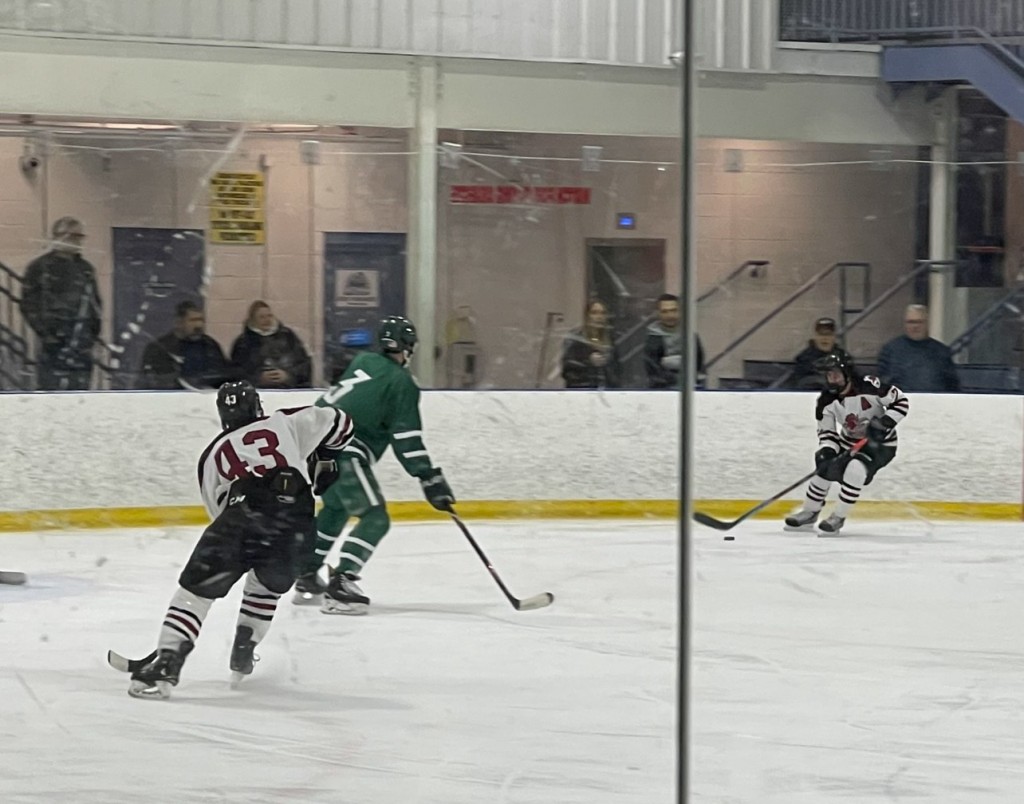 With just nine seconds remaining on the clock, Ramapo’s Eddie Dahdah finally gave the Roadrunners their first overtime victory of the season over Farmingdale State College on Saturday, Nov. 6. Dahdah was able to net his second goal of the game in the extra period, giving him eight goals in just five games this season.

Ramapo took control of this one early, grabbing a two-goal lead after the first period off goals from Christopher Dressler and Dahdah. Farmingdale clawed back in the second period, scoring goals from Robert Lynott and Greg Hendrickson. Before the end of the second period, however, Ramapo retook the lead as freshman Matthew Curattalo scored his first collegiate goal off an assist from the aforementioned Dahdah.

In the third period, Dressler added his second goal of the game off assists from Thomas Moskal and Rory Maurer, while Farmingdale was able to tie it via the stick of Matthew Budington, who scored twice in the period.

Goalie Dennis McGarry continued his strong season, tallying over 30 saves for the third consecutive game. McGarry stopped 31 of 35 shot attempts in this game, giving him a GAA of 2.93 for the season, 4th best among players who have started a minimum of five games in the empire division, and a save percentage of 91%, second best in the empire division among players who fit those same qualifications.

This was Ramapo’s third consecutive overtime game, and each game has resulted in a different outcome. Ramapo lost 3-2 in overtime to Quinnipiac, finished tied at one goal a piece against Hofstra, and finally defeated Farmingdale in the extra period 5-4 on Saturday night.

“It just comes down to whether or not you’re getting the bounces in your favor,” said head coach Mike Winters when asked about what made the difference in this one. “The opening overtime face off in the Farmingdale game, Dressler pushed the puck ahead and passed it off to Dahdah who hit the post. The game could have ended right then and there but we didn’t get any ‘puck luck’ on the play. A few shifts later, Dahdah made sure to find the back of the net to win the game.”

As for the lineup, the coaching staff was pleased to see Rory Maurer tally two assists in his first game back since his injury from the Oct. 10 matchup against Hofstra. Ramapo also put captain defenseman Luke Campomenosi to offense for the first time this season. “We moved Luke up front to give us a different look offensively,” said Winters. “Campo is a fast and highly-skilled player, whether he’s playing forward or defense. He doesn’t shy away from the physicality of the game either, which is important when playing a physical team.”

Coach was not messing around calling Farmingdale a physical team. There were a total 21 penalty minutes in this one, including Farmingdale State’s John Bryzgornia being thrown out of the game in the first period for contact to the head of an opposing player. Ramapo’s first goal came via a power play, and was later gifted a full two minutes of five on three, despite not being able to take advantage.

Ramapo’s next contest comes at home on Saturday, Nov. 13 against Massachusetts Maritime Academy. As always, the game will be held at Ice Vault arena in Wayne, N.J., and will be available via live stream on Youtube.