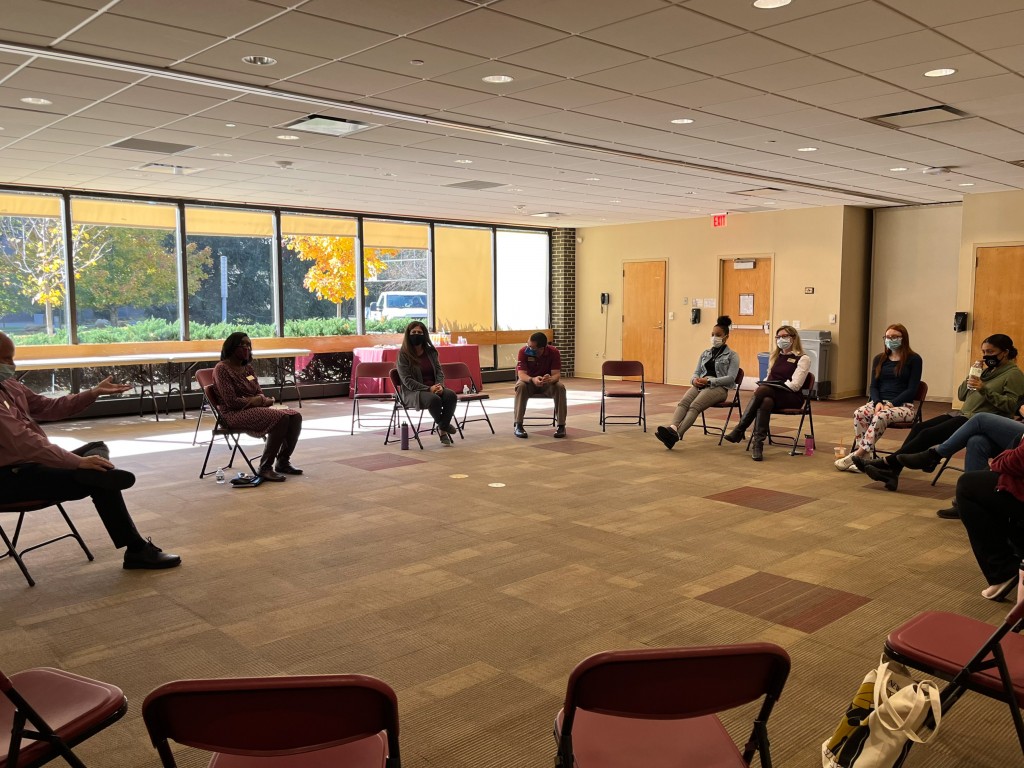 Ramapo’s Office of Equity, Diversity, Inclusion and Compliance (EDIC) held its first student forum on Nov. 10, addressing issues concerning bias, the First Amendment and freedom of speech. The Center for Student Involvement (CSI) and members from Ramapo’s counseling services were also in attendance.

The event was held inside the Alumni Lounges, where students were able to engage in a conversation with faculty and staff about the campus’ current climate. In addition to emphasizing the school’s counseling services as a resource, attendees discussed other ways in which Ramapo can mitigate harm in the event that a demonstrator enters campus. Salient amongst others is including students in the existing alert faculty and staff received about the outsider’s visit in advance.

Dean of Students Melissa Van Der Wall guided the discussion, explaining that students had issued complaints about the on-campus visit of self-identifying Stanley John on Oct. 21. Chloe Carter, a student staff member of the Office of Violence Prevention (OVP), explained that questions regarding Ramapo’s approval of John’s visit were still left unanswered.

“[Students] didn’t know if he was invited or if he requested to come on [campus],” Carter said before providing examples of the negative reactions students expressed in response to John’s demonstration.

Staff clarified that John was not invited by the school but was instead issued a reservation to which the college has leeway in discerning the time and place of his protest. A lawsuit covering a similar instance was cited throughout the discussion as well, where a judge ruled that a visitor like John who does not interfere with the students’ education cannot be restricted in their language. Otherwise, it would be a violation of the First Amendment.

“People that come to campus like Pastor Stanley pretty much know the law,” said Chief Equity and Diversity Officer Nicole Morgan Agard. It was also emphasized that he had gone through the appropriate channels to protest on campus.

Students and staff discussed whether or not John’s visit had risen to the severity of a hate crime. Agard explained that unless the language was used to incite violence, it would not be considered as such.

“Someone sharing their views on how they feel about someone else who is in a protected category — whether that is based on disability, race, LGBTQ+ status, gender — that is bias, that is not considered a hate crime,” Agard said. “If there is a bias complaint and there is some kind of conduct that is associated with it, then that steps it up to another level.”

If there were a similar incident, however, in which students or faculty had expressed an extent of discrimination or bias, Ramapo’s Bias Response Team would promptly address it. The Office of EDIC oversees the college’s Policy Prohibiting Discrimination, also referred to as “the Policy.”

Bias incidents can be reported to an online complaint form found on the EDIC website. Submissions are reviewed during business hours Monday through Friday from 8:30 a.m. to 4:30 p.m..

Though the next student forum is yet to be announced, offices on campus are looking to facilitate another one in the near future. More information can be found on the EDIC Instagram page, @rcnj_edic.