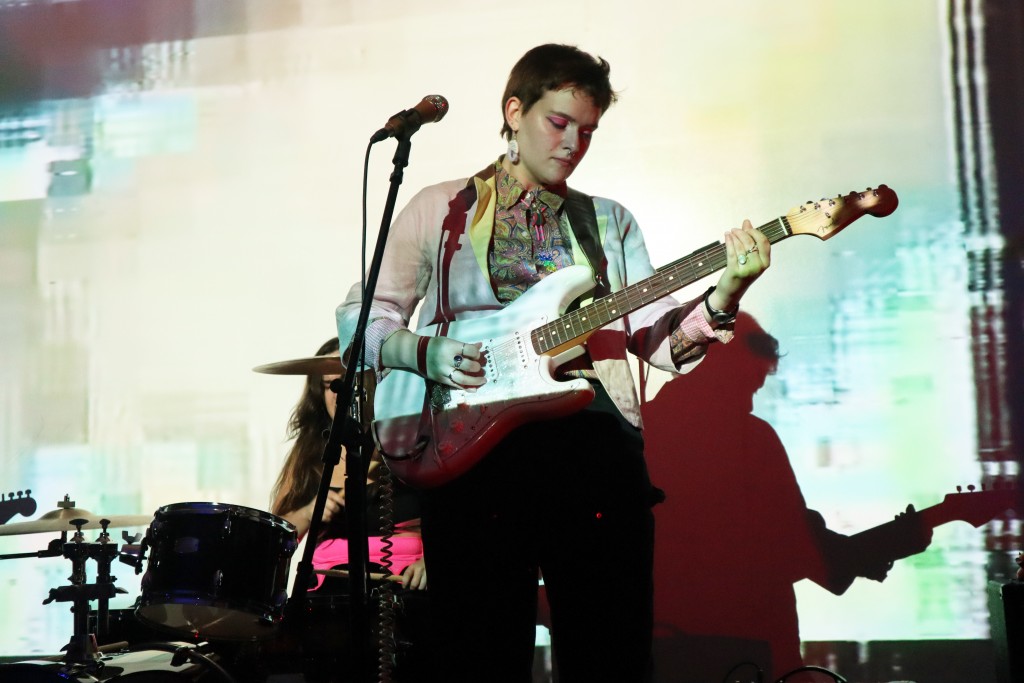 Ramapo’s Music Club and the College Programming Board (CPB) hosted their third and final Tuesday Night Live concert series of the semester with Jersey native band Tula Vera. The band performed in Friends Hall where students had the opportunity to gather for a night of live music one last time before the holidays and the stress of finals.

From the moment Tula Vera walked on stage, the eccentric vibe of the band filled Friends Hall, and their music matched their image perfectly. Tula Vera captures what a modern-day, experimental rock band looks like, and their personality — both musically and characteristically — highlights their creative generosity and wicked talents.

The band’s outfits and makeup paired well with the vibrance of their music and personalities: hues of pinks, killer shoe-game and patterned button-down shirts. The mix of styles easily reflected the unique personas of the four band members, yet they still managed to merge with one another and create a cohesive image.

Tula Vera’s music takes influences from modern funk, blues, 60s rock and a little mixture of everything in between. Blending hit music styles from across the decades, their songs reflect their creativity and quirky individuality, ultimately setting them up for successful tunes you’ll want to add to your library right away.

“We love experimenting with a lot of different genres,” said drummer Margaret Marino. “One of the best compliments we get is that you can’t really place us [within one genre].”

Established in 2015, Tula Vera was originally born from the minds of singer/songwriters Claire Parcells and Dylan Drummond, who met at music school. The duo expanded their group in 2016 when drummer Margaret Marino and bassist Joe Jansen joined the band, releasing their debut self-titled album shortly after.

During their performance, the band was accompanied by psychedelic digital backdrops and colored lights, moving seamlessly with the beats and vocals in the variety of songs. With a mixture of distorted movie clips and incomprehensible digital graphics, Tula Vera did not fail to possess an entire experience for the students gathered around the stage.

Despite the visuals matching the band's vibes so incredibly, the band gingerly shared that they were not anything too specific or planned out: they came from an ad-free YouTube video. This, however, does not take away from the breathtaking stage performance the band created for their audience.

Parcells shared that college campuses are one of the band's favorite places to perform, saying, “It’s cool to come into people’s little communities, and we love it when there is funding for the arts.”

Students were evidently having a good time, as many were caught nodding and dancing along to the music throughout the set. Friends Hall may not have been packed, but the students that did attend the concert were certainly given an exciting night. Some enjoyed the show so much they went home with Tula Vera merch, which the band brought with them, packed inside of a small, red, vintage suitcase.

It was refreshing to have a Jersey native band at Ramapo, as their appearance truly helped reframe the distinctive shared community we are grateful to have. The New Jersey music scene is truly a culture of its own and space for many growing artists of all styles and personas — as well as listeners.

“We have such a lovely music scene in New Jersey here that we are so grateful to be a part of with so many amazing bands,” said Parcells.

“The community is just so wonderful and so kind,” Marino added. “We hope to return that kindness as we continue to grow as musicians and, ideally, as our platform gets bigger.”

Tula Vera is heading on their first 20-show tour in December and January — which they planned entirely themselves. However, as they move on and find new performance opportunities, they hope to come back to Ramapo and perform for us in the future, even while they continue to move closer to the forefront of the popular music scene.

You can listen to Tula Vera’s two albums “Tula Vera” and “Again and Again…” on Spotify, Apple Music and YouTube, or you can purchase a CD from their website. For more information and Tula Vera updates, head to tulavera.com or follow them on Instagram @tulaveraofficial.