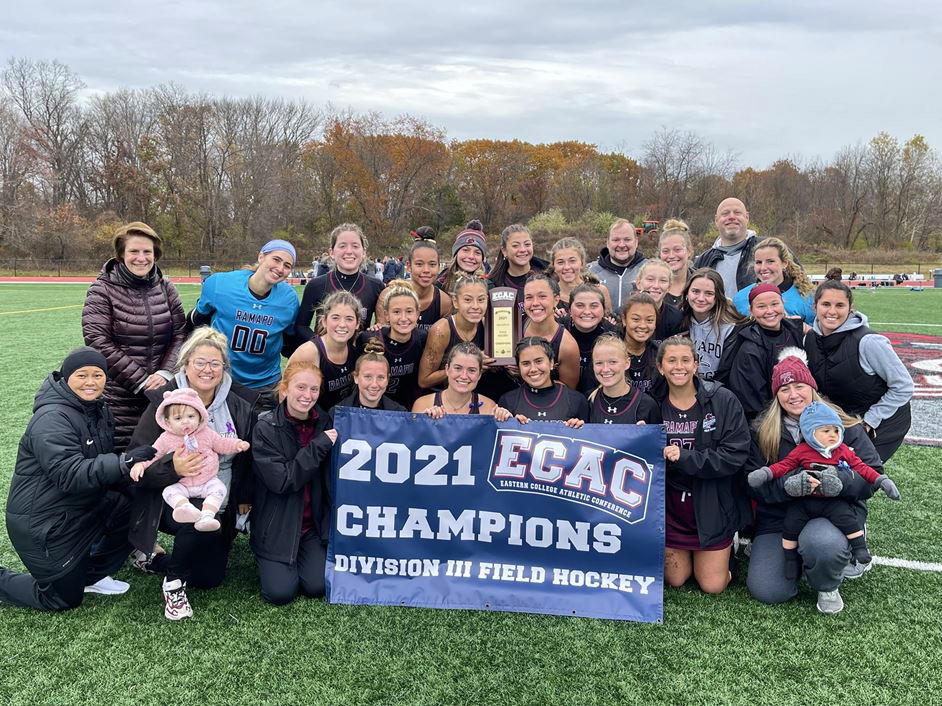 It was a thrilling week for the Ramapo field hockey team as it took down all three opponents en route to an Eastern College Athletic Conference (ECAC) championship. Up first in the tournament was Sweet Briar College, who Ramapo faced on Wednesday, Nov. 10. It was as easy as it gets in a 5-0 win as Ramapo did not even allow a shot attempt from SBC. Ramapo scored twice courtesy of Talitha Joustra, once from Mariah Tovar, once from junior forward Victoria Docherty and once from Gabbi Gomez.

Up next for the Roadrunners was Widener University on that following Saturday, Nov. 13. This one was a much more heavily contested matchup that did not see a goal until Brin Marcavage of Widener netted one in the 56th minute of action. Ramapo was forced to pull goalie Michelle Kukan to bring in an extra attacker, and after multiple stops without a goalie in their own end, the Roadrunners ran up the field and scored from a Lucy Mackenzie wrist shot, assisted by junior forward Katie Yarussi and Joustra. The goal forced the Roadrunners into overtime for the first time since their Sept. 8 matchup against Fairleigh Dickinson University-Florham. It only took one minute and 43 seconds of seven-on-seven for Docherty to net her second goal of the tournament, setting up a rematch of Ramapo’s overtime loss to FDU-Florham on Sunday, Nov. 14.

Ramapo was able to get the puck in the net early in the final round of the ECAC tournament, as Docherty netted her third goal of the tournament, unassisted. Later in the first period, FDU-Florham’s Haleigh Flukey tied the game off a penalty corner. The stat sheet stayed even throughout this one, with shots on goal staying at six apiece for the entire match, shots going 10-9 in favor of Ramapo and the majority of the possessions were spent in the neutral zone. It wasn’t until the 58th minute when Yarussi was able to score the championship-winning goal for the Roadrunners, off assists by Maggie Farrell and Docherty.

Postgame, Ramapo President Cindy Jebb presented the team with their ECAC trophy and Docherty with ECAC Tournament Most Valuable Player, scoring three goals in as many games.

“[She’s] the most talented player I’ve ever coached," said head coach Jennifer Tafro about Docherty’s outstanding performance this season. “She’s just electric, she sets the team up so well, not only creating opportunities for her other teammates but also finishing them from herself. I can’t say enough about her offensively, but also defensively. She does such an outstanding job putting pressure on the opponent.”

Docherty finishes the season with 25 goals and 12 assists, totaling 62 points. She was named to the New Jersey Athletic Conference (NJAC) All-Conference First Team.

While speaking on the championship game, head coach Tafro said the team has had FDU-Florham on their minds since they fell to them in overtime back in September. When asked about what changed since then, Tafro mentioned the fact that Ramapo didn’t feel “outplayed at any point during that first matchup” and that in overtime it is “anyone’s game.”

“Their heart,” said Tafro about what made the difference between September and now. “They leave it all out on the field, and I’m so incredibly proud of them for never giving up on each other. They build each other up so well, it’s hard to fight back after falling down but the chemistry this team has is so incredible.”