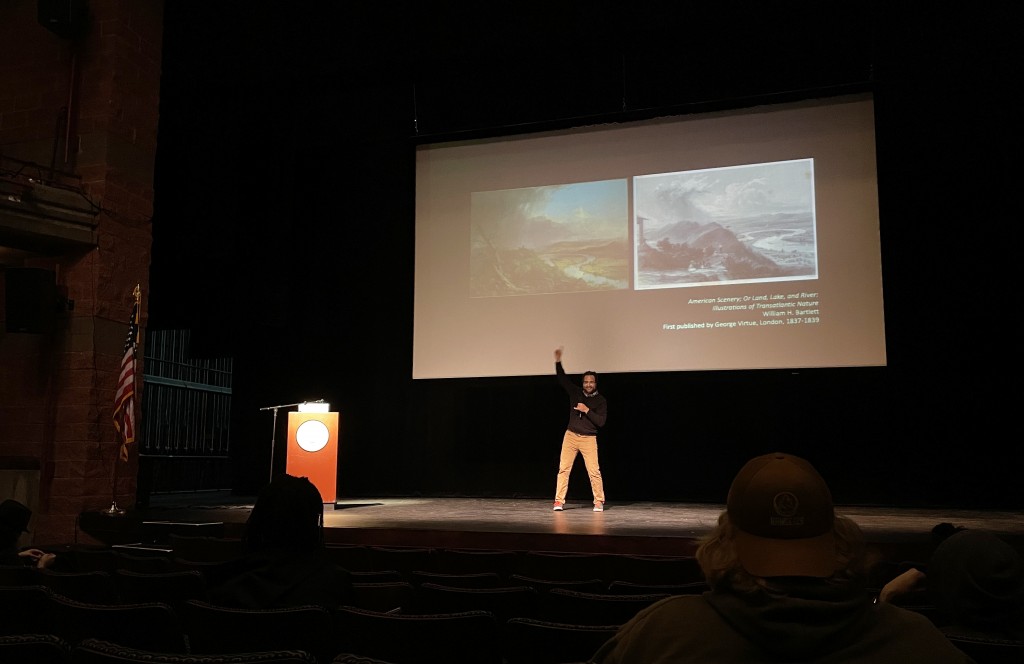 Visiting artist Jean-Marc Superville Sovak spoke to students about an array of his projects on Thursday, Nov. 11 in the Sharp Theatre. His most recent body of work is titled “a-Historical Landscapes” and revolves around the idea of representation.

Since so much of Superville Sovak’s work concerns this concept, he felt it would be more apt to title his talk “Making Representation Matter.” He spoke about this abstraction by giving the example of Ramapo’s infamous arch, and the many design regulations which define how it can be represented.

“I think the best way of thinking about representation is talking about it as a statement of values,” Superville Sovak said. “What do we prioritize? What do we value?”

His “a-Historical landscapes” values the presence — or lack thereof — of people in 19th century landscapes, primarily those of the Hudson Valley through the Hudson River School. These works depict, as he tells students, a Christian idea of purity and humility through raw landscape, one which erases people who were suffering in those same beautiful spaces.

“Who is absent, and who is present? Who is being represented, and who is not,” Superville Sovak said. “What is our statement of values, that is what I was curious about.”

He combined these landscape engravings with images from anti-slavery and abolitionist publications, creating a “speculative representation” that he finds to be more historically accurate. Superville Sovak said he asked himself how to represent these underrepresented people.

“How could I talk about the legacy of these legally mandated forms of non-citizenship, essentially, in this country,” Superville Sovak said. “What if I took those images and I found a way to insert them into [William] Barlett’s idealized American landscapes. How could I make this representation, this statement of values, more complete?”

His other projects revolving around the theme of representation include “I Draw & You Talk,” a series of 109 portraits done in Beacon, N.Y.. Superville Sovak spent 30 days asking people questions and drawing them as they told him their stories.

Others, in a similar political vein to “a-Historical Landscapes,” included a sculpture installation in New Paltz, N.Y., titled “Bury White Supremacy.” He spoke about Ibram X. Kendi’s book “Stamped from the Beginning,” and the ideas within.

“He posits this idea that you can have an argument, an idea, a position that is both racist and antiracist, simultaneously, those things are not mutually exclusive,” Superville Sovak said.

Superville Sovak discussed another collection of his, “Strange Fruit; Split Seed,” which looks at the lynching photographs and how ordinarily they have been catalogued in American history. He asked, “What if I removed the lynch mob from the act, in a way of representing the absolute ordinariness of the most inhumane act you can think of.”

Through his works, Superville Sovak redefines representation in a range of settings, or as he calls them “sites of survival.” He brought the presentation back to Ramapo, tying in the Havemeyer family and the image of the arch.

He spoke about how there would be potential for representative art in the history the arch represents for Havemeyer’s sugar fortune, “as a way of acknowledging the lives of those African bodies and the profit from their bodies.” Superville Sovak speculated an arch made of sugar, entitled “Bittersweet” or “The Domino Effect.”

He left students with a final message, building on a quote from Darren Walker of the Ford Foundation.