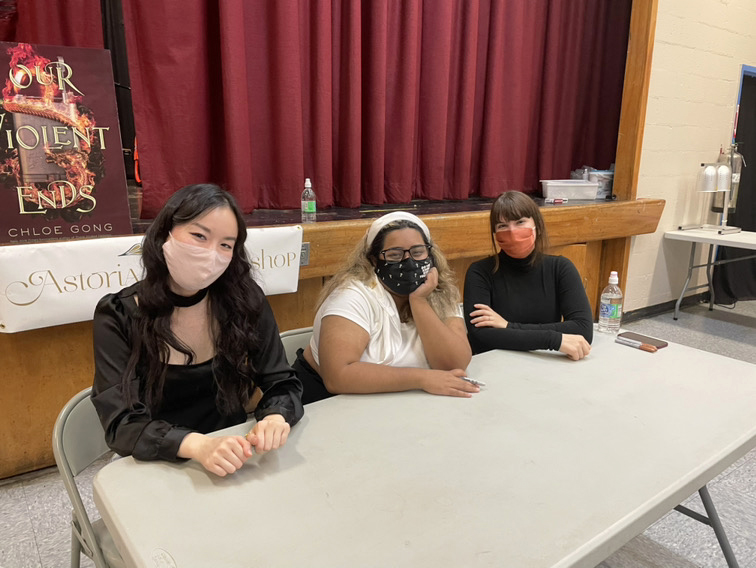 After nearly two years of virtual events, the literary world is stepping out of cyberspace and back into the streets. Having been put through a tailspin due to the coronavirus pandemic delaying and shifting book releases, publicity events had to totally reorganize the way they operated.

While audiences welcomed virtual events for over a year, people are ready to experience these events in-person again. One of the first in-person events after the COVID-19 pandemic restrictions began to ease was also the first in-person book event for breakthrough author Chloe Gong.

Gong became a viral sensation after penning her debut novel “These Violent Delights,” which is a Romeo and Juliet retelling set in 1920s Shanghai involving crime families, mysteries and a mysterious monster. Her highly anticipated sequel novel “Our Violent Ends” debuted on Nov. 16, and I was lucky enough to attend "Our Violent Ends:" Live Event with Chloe Gong, Tashie Bhuiyan and Victoria Lee, held at the Variety Boys and Girls Club in Queens, N.Y..

On that chilly night, I eagerly made my way into New York City and stood in line with dozens of fans. One fan, Michelle, eagerly awaited her chance to meet Chloe Gong and get her copy of “Our Violent Ends.”

“We’ve been starving for it,” she said, practically buzzing with anticipation.

Everyone was excited to not only witness Gong share insight into her work, but also authors Victoria Lee and Tashie Bhuyian. Lee and Bhuyian directed the panel questions, as well as shared details on their own works, “A Lesson In Vengeance” and “Counting Down With You” respectively. They also signed copies of their books after the event.

The panel questions were exceptional and the casual camaraderie between all of the writers created a very intimate environment for all attending. Gong’s duology is so eclectic and multi-layered that it sets a fertile ground for many interesting questions and trains of thought.

Many interesting topics relating to not only the books in question, but writing itself were discussed. One such topic was how Gong, a New York Times bestseller at only 22 years old, went through the publication process during a global pandemic.

She was unable to host in-person events for “These Violent Delights” and get to promote her work the traditional way. For a debuting author this posed a complicated dilemma. She decided to connect with readers via social media, and grew a large following of passionate and loyal readers.

The “Our Violent Ends” Live Event was one of the first times she could see her fans in person. These fans are loyal ones and eagerly ate up the new details Gong revealed about her upcoming book releases.

Gong currently has a spin-off duology scheduled for release next fall called “Foul Lady Fortune,” which is a spy novel set in the same universe as the “These Violent Delights.” The following summer, she is set to release her debut adult fantasy novel “Immortal Longings,” which is based on the historic Kowloon Walled City and the Shakespearian tale of Anthony and Cleopatra. The buzz about these books was palpable in the room.

To conclude the event, fans were able to get books signed and meet Gong, Lee and Bhuiyan. The authors were all down to earth, friendly and clearly enjoying the event as much as the fans were.

This event was a celebration of creativity and passion. And after nearly two years of imaginations confined to the pages of books, it was unleashed in a small theatre in Queens.