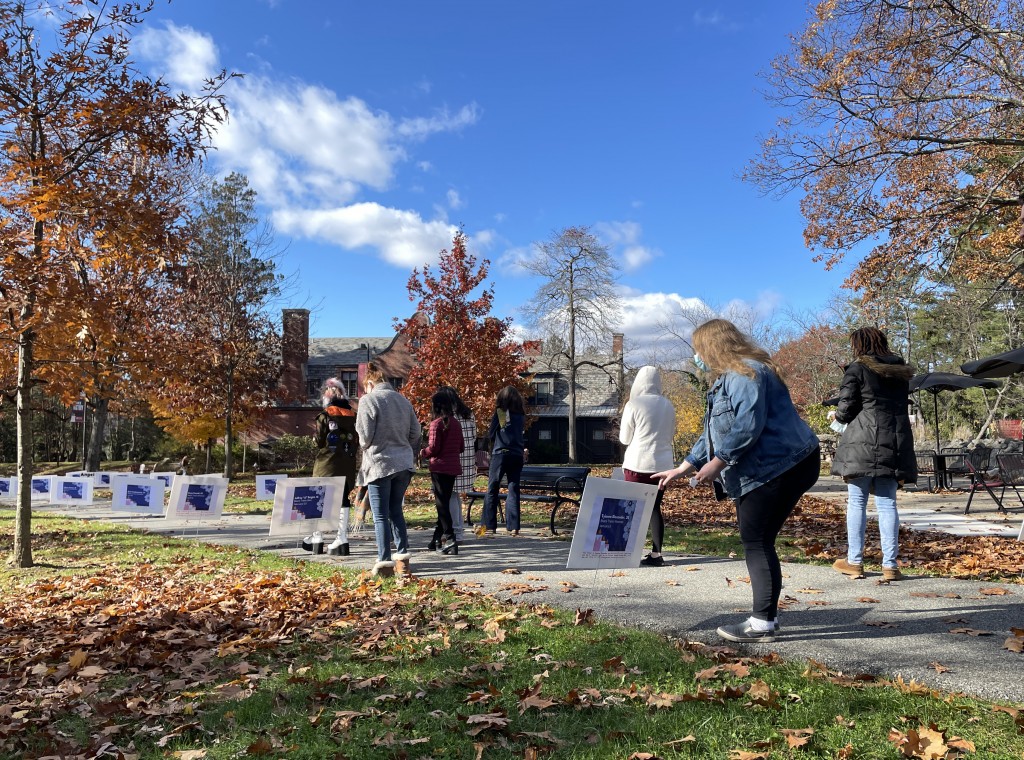 The Grove was lined with signs on Nov. 19, each telling the name and story of one transgender person lost to violence in 2021. As students and faculty walked the Grove for Transgender Day of Remembrance, they reflected on the lives of the 47 transgender individuals being honored, and looked ahead at what the Ramapo community can do as allies of the trans community.

The day came at the end of other weeks highlighting awareness on campus: Hunger and Homelessness Awareness Week and Healthy Masculinity Week. Speakers recognized the intersections of these causes with relation to the struggles of trans people.

President Cindy Jebb gave opening proclamations, acknowledging the meaning of Transgender Day of Remembrance and iterating Ramapo’s commitment to serving the trans community on campus and beyond.

“These victims, like all of us, are loving partners, parents, family members, friends and community members. They worked, went to school and attended houses of worship,” Jebb said. “They were real people. People who did not deserve to have their lives taken from them.”

Student Trans Outreach Coordinator for the Women's Center and LGBTQ+ Services Kian Concert was one of the key organizers of this event, and gave a speech on their own experiences as a trans masculine person.

“The city I was born and raised in was once known as America’s transgender murder capital,” Concert said. “Before I came to Ramapo a horrific crime was committed against a Black transgender woman in my city. Her name was never released, but I have carried her with me this entire time.”

Transgender Day of Remembrance highlights the full identities of trans lives lost to violence. After Concert’s speech, the names of all 47 honored lives were read aloud. Of the lives lost, the Human Rights Campaign reports that 29 of them were Black, and since 2013, two-thirds of known victims of violence in the trans community were Black women.

“2021 had been the deadliest year on record,” said Rachel Sawyer-Walker, associate director of the Office of Equity Diversity Inclusion and Compliance. “Black trans women have a life expectancy of 33-35 years old and have the highest murder rate in this country.”

As they walked the Grove three times to mirror this statistic, attendees placed heart-shaped stickers of the transgender pride flag on each sign, taking a moment to reflect on the life that person had lived.

“Every year when I organize these signs I have to stop and take a break,” Sawyer-Walker said. “It’s hard for me to see these names and knowing I will just have to add more names as the days keep going leading up to this event.”

Concert’s heartfelt speech reminded attendees that the gravity they felt that day was one the transgender community feels constantly, and that being an ally is more than one day of solidarity.

“The transgender community are fighting for our lives everyday. We are carrying the weight of our murdered siblings everyday- we need help shouldering this weight,” Concert said. “We need help in this fight. We cannot and should not have to do it alone.”

Sawyer-Walker encouraged each person to talk to their neighbor about what they are doing and can do for the trans community while they walked. She called on them to acknowledge their privileges and take the life-long commitment of “decolonizing oneself.”

Transgender Day of Remembrance gives light to the injustice the trans community faces, and implores observers to do more than remember. It asks that they see transphobia, and do what they can to ensure it does not pervade their communities, in order to keep trans people safe.

“Understand that transphobia is not always overt, graphic violence,” Concert said. “It can be quiet. It can be insidious. Learn how to identify transphobia and help us defend ourselves against it.”