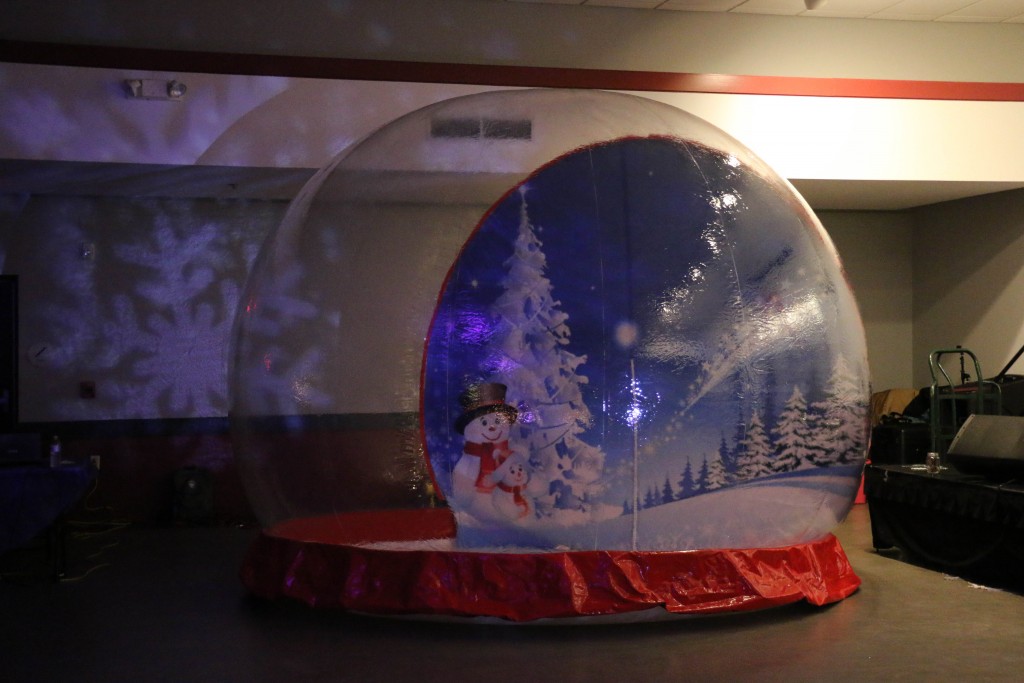 The College Programming Board (CPB), Student Government Association (SGA) and the Ramapo College Foundation hosted their annual Snowball: A Winter Homecoming on Dec. 4, giving students and guests the opportunity to engage in a semi-formal night of dancing and community engagement.

A total of 78 students gathered into Friends Hall’s winter wonderland starting at 9 p.m., where they were welcomed by friendly, mask-wearing faces, a variety of food and a life-sized snow globe — provided by mobile entertainment company Any Excuse For A Party. The hall was decked out and perfect for many photo booth opportunities.

Snowball was entirely student-ran and put together by CPB and SGA student members, both of which consist of brand new members. CPB has an almost entirely new e-board, but they have been able to already accomplish a lot of successful programming events.

“They’ve been impressive since day one as a group, and they’ve been a really good team, relying on a lot of creativity, ambition, leadership and fun,” said Coordinator of Student Activities Jack Nesmith. “It’s been a pleasure just being their adviser and watching them grow, and I’m so proud of their success.”

The two organizations collaborate together on many projects, and it typically is their co-sponsored events that have the most success. The interactions between the two organizations are professional, creative and successful, and this is evident to students, ultimately encouraging them to find more ways to get involved.

“I joined CPB because of SGA,” said freshman Avery Cangro, SGA chief of staff and CPB e-board member. “CPB is laid back and fun, but the payoff is so rewarding.”

“I like how we do so many different events for the school because I get to participate in them,” she said.

Members of both executive boards were sure to praise Paolo Miyashiro, CPB president and SGA vice president, and credit him for truly being the reason Snowball was possible and achieved so much success. His work on campus is certainly not overlooked, and his determination for providing the student body with memorable, meaningful events is well-appreciated.

“While Snowball is an annual event we host every year, we really wanted this year to be very special,” said Miyashiro. “We know that a lot of students — especially our first- and second-year students — missed out on their proms or homecomings due to the pandemic, so we really just wanted to bring that experience back for them in a big way.”

The dance captured the essence of high school semi-formals and proms, and it was expertly executed through the diverse music and space to dance.

“We had about eight hours worth of music prepared, but we didn’t even get to use it because so many people put in requests,” said CPB Live Entertainment Chair Claudia Eligur, who was the DJ for the night. “I'd rather play things people want. It’s a special feeling when you hear the next song come on and it's the one you wanted.”

With music from ABBA, Nicki Minaj, old childhood classics — like “Party In The U.S.A” — to line dance hits “The Cotton Eyed Joe” and “The Cha Cha Slide,” there was something for everyone to enjoy. Many utilized the dance floor to their full advantage. Whether it was just rhythmic jumping up and down or full on dance circles, attendees let it all out on the dance floor.

“It was honestly more fun than playing today’s hits. There was something comical and nostalgic about singing these old kids songs and party songs I wouldn’t have considered initially,” Eligur said.

However, it certainly wouldn’t be a school dance without a remarkable slow dance. The romantic song of the night was Ed Sheeran’s “Perfect.” Couples and groups of friends sauntered to the dance floor to sway with one another before diving back into the upbeat tunes of the night.

“It reminded me of high school dances,” said sophomore Melissa Priester. “We thought we were going to get a senior prom, and then we didn’t, so it was nice to have something like that at Ramapo.”

CPB and SGA are currently planning for their abundance of spring 2022 events, including their live concert, which will wrap up the 2021-22 school year.