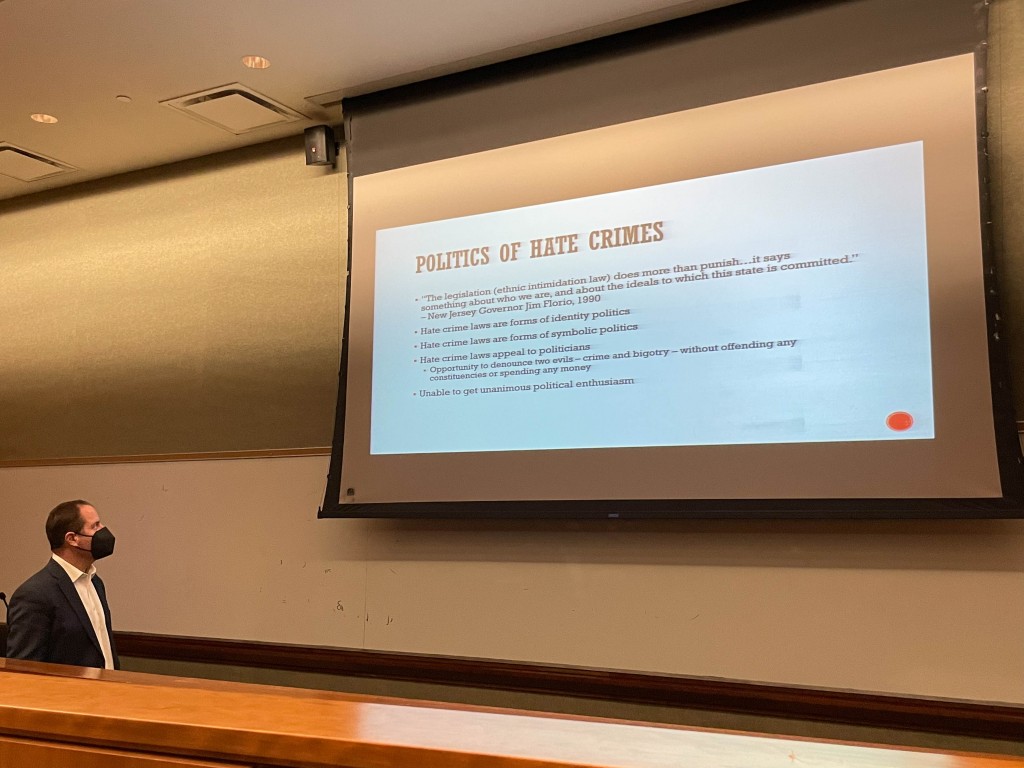 Dr. Aaron Lorenz, dean of the School of Social Science and Human Services (SSHS), led a discussion on domestic racial violence called “Hate Crimes in the U.S.” on Jan. 27. The talk was the first of SSHS’ Dialogue series: Conversations on Race upon returning to campus.

Lorenz made it clear that this event was not for the sake of political debate and personal experiences, but for the sake of discussing basic civil rights from the academic perspective to explore how they are upheld and treated within the legal system.

A 2020 report indicates that nearly 62% of bias incidents were based on race, ethnicity and ancestry. Lorenz emphasized that this recorded number cannot truly reflect hate crimes that are dismissed inside a courtroom.

Audio snippets played from cases R.A.V. v. St. Paul (1992) and Wisconsin v. Mitchell (1993) revealed that the Supreme Court had to look at content-based discrimination to prove whether or not they were racially motivated crimes.

On its face, the discussion is one revolving around the First Amendment and how it should be applied. Lorenz clarified it is instead about protecting freedom of belief while condemning action made as a result of certain “less civil” beliefs.

For many cases, gaining court recognition is already a difficult task, let alone proving a crime to be a hate crime, a point made by Dr. Naseem Choudhury, a professor at Ramapo. She continued to talk about how social constructs make it so that, more often than not, victims do not even see that they are being disadvantaged.

“There are a lot of instances where African American men, women and children are targeted but it’s so glossed over. The young woman in Connecticut who was killed: only after her family made a huge human cry was it even considered to be a crime — let alone a hate crime.”

The conversation moved into one of the main points emphasized by Dr. Lorenz about “excess.”

“One of the beauties of this country is excess – if we give the people of this country free speech, they’re gonna say some wild and crazy things. But wild and crazy doesn’t equate to burning crosses on lawns,” he said, in reference to the 2003 Virginia v. Black case in which members of the Ku Klux Klan rallied and burned a cross on the front lawn of an African American’s residence.

The discussion ended on a higher note, coming full circle when Lorenz brought it back to the attendees, reminding them that the system is one working for the people. “A society that continues to not recognize its flaws will continue to be a flawed society.”

The next rendition of this series will take place on Feb. 24, covering the politics of cultural appropriation.