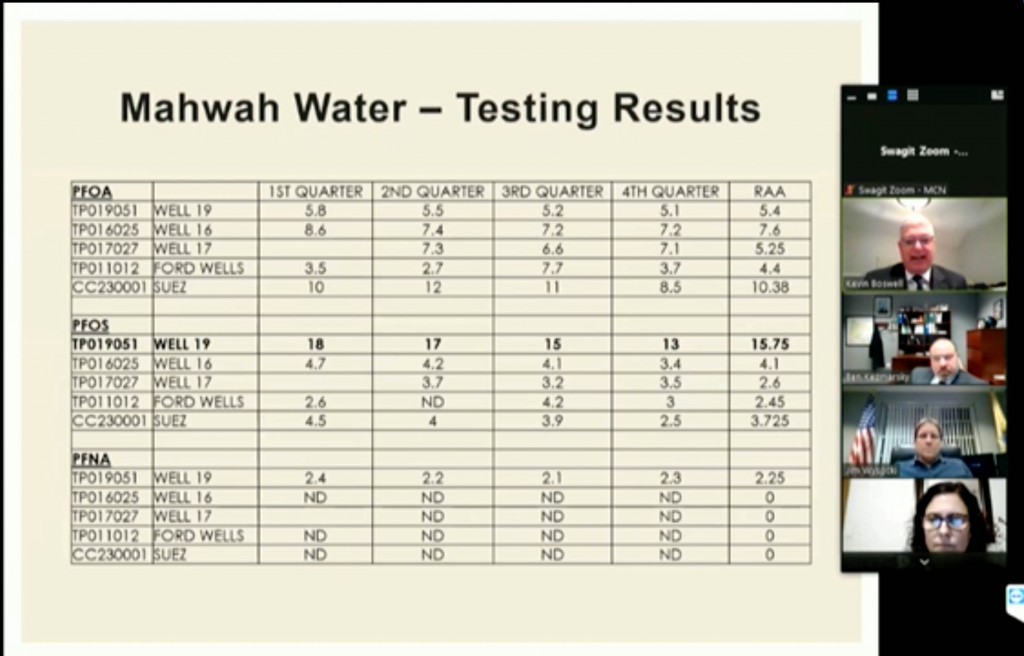 Photo courtesy of Township of Mahwah.

Ramapo College alerted students on Jan. 27 of contaminants found in the township’s drinking water that exceeded state levels. In response, the administration contracted an environmental professional to conduct water sampling on campus this week and will release results accordingly.

The update comes after The Mahwah Water Department sent a similar notice to its residents on Jan. 13. It states that samples collected Jan. 1 to Dec. 31 of 2021 at Well #19 show Perfluorooctanesulfonic Acid (PFOS) levels of .016 micrograms per liter compared to New Jersey’s maximum contaminant level (MCL) of .013.

The MCL was a standard change adopted in June of 2020, according to a presentation given at a Mahwah town hall Monday night. City water engineer Kevin Boswell gave information on the town’s plan for getting in compliance, which aims at resolution by August of 2023.

According to Boswell, compliance is measured by a running annual average (RAA), an average of the four quarterly measurements throughout 2021 at the five points of entry for Mahwah’s water system. A notice of non-compliance was issued by the New Jersey Department of Environmental Protection (NJDEP) on Dec. 23, 2021.

One resident pointed out that neighboring towns were alerted of the notable contamination levels at different times in 2021, and asked for a clear breakdown of the timeline for treatment, as other towns have indicated shorter plans. Boswell explained filing a Remedial Measure Report (RMR) Form with the DEP has several stages, the first of which will be submission of the report by Feb. 18.

Boswell predicted the DEP would issue the permit for treatment by July 18, and bidding for the job would take place the following month, with one year thereafter to resolve the PFOS levels. Levels will continue to be tested quarterly and should any entrance sites exceed MCL again, notices will be issued to Mahwah residents.

“It’s a very, very regulated process,” Boswell said. “There is no one who doesn’t take this as a paramount responsibility.”

New Jersey’s standard of 13 parts per trillion is significantly more stringent than the national average set by the Environmental Protection Agency, which stands at 70 ppt. Boswell said that a common comparison for the measurement of ppt is a single drop of water in 20 Olympic sized swimming pools, so the contamination levels, while not in compliance, are not so large as they may sound.

Residents and council members had many questions regarding the advised action for water users, given the health risks associated with polyfluoroalkyl substances (PFAS). Because there is not currently any recommendation to stop using or drinking the water, the township has no plans for compensating residents who choose to install filtration systems or purchase bottled water.

The presentation indicated that at-home water filtration systems, such as brita filters, effectively filter out up to 50% of PFAS. One speaker on the call asked what the presenters were doing in their own homes in response to the contamination notice.

Boswell explained the options the town has for decontamination systems, of which designs are being made up for several that could be used when the time comes. Treatments include granular activated carbon, ion exchange treatment and high pressure membranes — nanofiltration or reverse osmosis — all of which can be learned about in more detail in the recorded presentation.

Some residents were curious as to why the town would not simply stop sourcing water from Well #19, the site with levels above the MCL, but Department Head of Water/Wastewater Division Giselle Diaz said the task is not so easy. Water from this well has been used constantly since even before the violation, and without a no-drink order, such action is not being recommended at this time.

“This water has not changed,” Boswell said, “the standards have changed.”