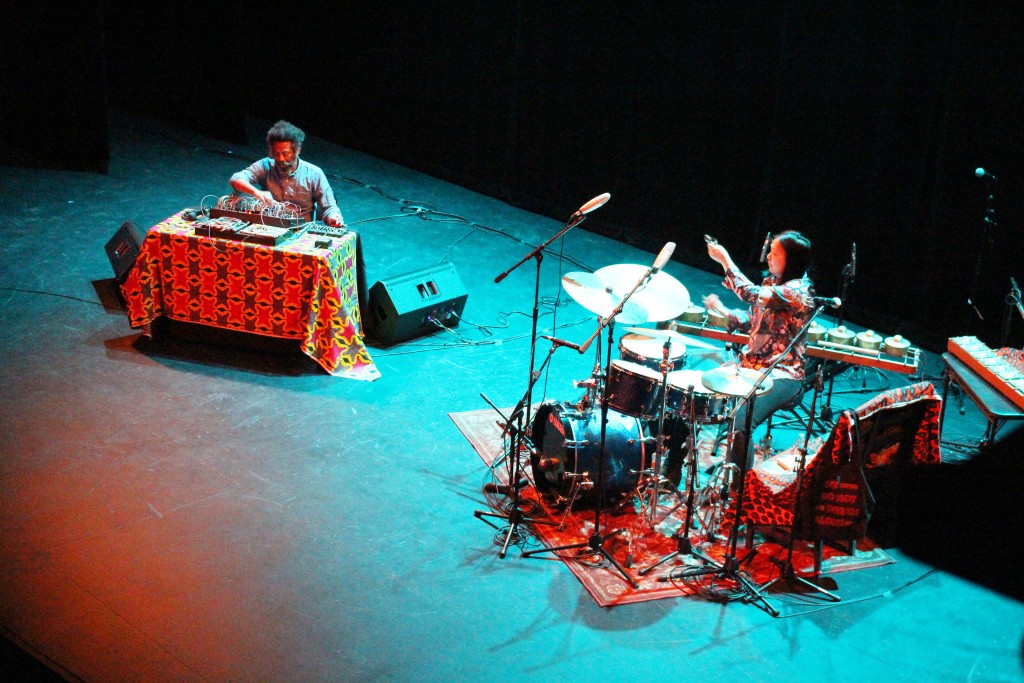 The Berrie Center’s annual Les Paul Festival Concert on Feb. 5 featured experimental musical artists Robert Aiki Aubrey Lowe and Susie Ibarra performing as a duo. The performance was advertised as exploring “contemporary artists who represent Paul’s innovative and progressive spirit” and showcased Lowe and Ibarra’s improvisational style of music, all while honoring the late Les Paul, who is accredited for his contribution to the music industry and crafting the first solid-body electric guitar.

Under the dim, blue lighting, Lowe sat on one side of the stage behind a table with his synthesizer before him while Ibarra sat opposite, surrounded by her drum set and other percussion instruments. They collaborated for the duration of the show without exchanging any words, simply letting their spontaneous sounds guide them.

Lowe used a voice and modular synthesizer to create his music. There are various ways that he produced the sounds: some were pre-recorded, like beeps, alarms and microphone feedback, while others came from his voice and a microphone. A few times throughout the performance, he also bowed a piece of equipment that sounded like a string instrument, which he later described as a woodblock with screws and a contact microphone inside of it.

Ibarra used a variety of percussion instruments — her Yamaha drum set, xylophones, gongs, drumsticks, mallets and sometimes just her hands — to create music inspired by her Filipina background. She shook bells and then rubbed them on a snare drum. She scratched fingers over the ridges of her cymbals. She put her entire body into the performance, swaying while using a bamboo buzzer and moving her whole upper torso onto the cymbals as she crashed them.

Lowe and Ibarra navigated the tides of their music together. Lowe layered the sounds that he created, sometimes catching Ibarra’s percussion, having them echo and reverberate through the theater. When paired together, Lowe and Ibarra’s work sounded at times eerie and chilling, some booming and loud, and other times magical and soothing.

“It felt as if I was being pulled into a sacred alien temple that’d been retaken back by a jungle. Truly an amazing experience,” said Tyler Maxwell, a student who attended the show.

Ramapo College music professor Zach Layton held a Q&A after the show with Lowe and Ibarra that included questions about their style of improvisation, their musical inspirations, their instruments and equipment, and their other artistic endeavors.

This performance was not the first time that Lowe and Ibarra have collaborated, which has allowed them to establish a friendship and a musical rapport.

“It’s very intuitive, how we move through it and our vocabularies,” Ibarra said.

While Lowe mainly works with synthesizers, he has also recently embarked on other projects, including composing the score for the 2021 horror film “Candyman,” for which he has been shortlisted for an Oscar nomination. Ibarra mainly sticks to percussion, combining her Filipina roots with a jazz music style. She has performed in many notable venues, including Lincoln Center and Carnegie Hall.

While they both have a lot of experience under their belt, Lowe and Ibarra also highlighted the impact that their own energy, as well as the energy of the audience, has on their improvisation, as Lowe said, “the biggest influence in any creative endeavor is the environment.”