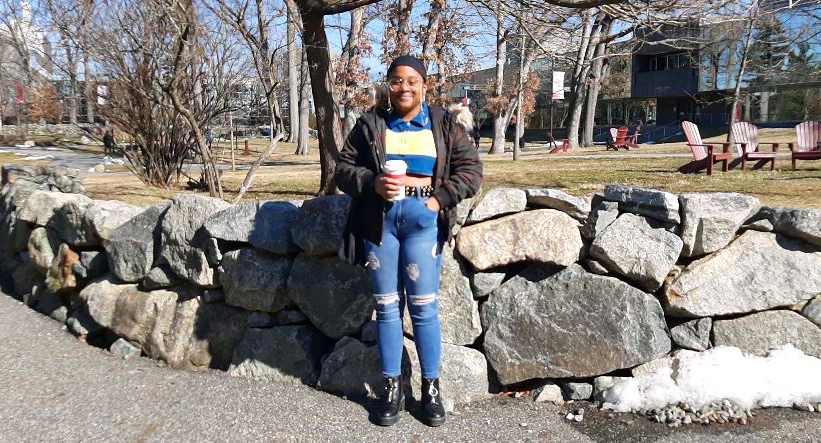 Ramapo senior Shugar Hall plans on releasing the first episode of their new webcomic, “Don’t Forget the Note,” on Feb. 14 on Webtoon. The release date falling on Valentine’s Day is no coincidence, as this project will involve the misadventures of a modern personification of Cupid.

Without giving away too many spoilers, Hall summarized the inciting incident that will set up the first few chapters. A young woman has her mind set on the simple task of holiday shopping, but ends up getting tangled in “some supernatural shenanigans in the form of a manifestation of Cupid, who is upset because the Valentine’s Day decorations don’t have the magic that they need.”

Hall’s main driving force is a long-held interest in the Greek and Roman pantheons.

“I don’t like the way that they are presented in webcomics because of the fact that they just don’t feel like people‒ which, I mean, they aren’t, but especially in Helenistic Greece they’re supposed to be like people,” they said. “People that can wipe you off the face of the planet if you did something wrong, but they would still have the issues of people.”

For that reason, Hall hopes to represent a new side of the romantic icon to dispel the common image of a cute winged toddler. “This is gonna be a guy who cares a bit more about his job than he probably should,” they said.

Inspiration can come from anywhere, and Hall’s broad assortment of muses drives this point home. In addition to classic mythology, this story is inspired by the well-known webcomic “Boyfriends,” the store Target, the lovecore fashion movement and the subcultures surrounding STEM and coding. The latter two are mainly pulled from to build the main character, whose scientific mind serves as a narrative foil to Cupid's personality.

The cumulative effect is a story that is both slice-of-life and urban fantasy. The exact number of episodes has not been determined yet, but it will be released over the course of several months and Hall is excited to finally start sharing their work after a long drafting process.

Hall brainstormed and prepared the art using both physical and digital mediums. They found a free application where they could type up the script for the sake of staying organized.

Anyone who is considering publishing a webcomic of their own is encouraged to follow their ambitions.

“Webtoon is very easy to publish on, I’d say it’d be a bigger question of how to get famous off of Webtoon,” they joked when asked if they had any advice for those who want to get started. “I don’t really have an answer for that. All I know is that I do lots of fanart, and I’ve written fanfiction in the past. I was like, ‘I can maybe write a story if I thought about it for more than five minutes.’"

As a visual arts major and an overall creative person, Hall has enjoyed getting into a new unique medium. "Something really interesting about webcomics is that a lot of them have different ways of doing animation and music, and so I’ve had ideas of animations that I can do alongside the webcomic. I don’t know if they’ll be posted in the format of the webpage or if it’ll be a separate thing, but it’s gotten me really invested in 2-D animation again, which has been nice."

Hall is still adding the final touches, but is planning to upload the first chapter of “Don't Forget the Note” next Monday on Webtoon. To those without plans this Valentine’s Day, or anyone interested in supporting a fellow Roadrunner, give it a shot.