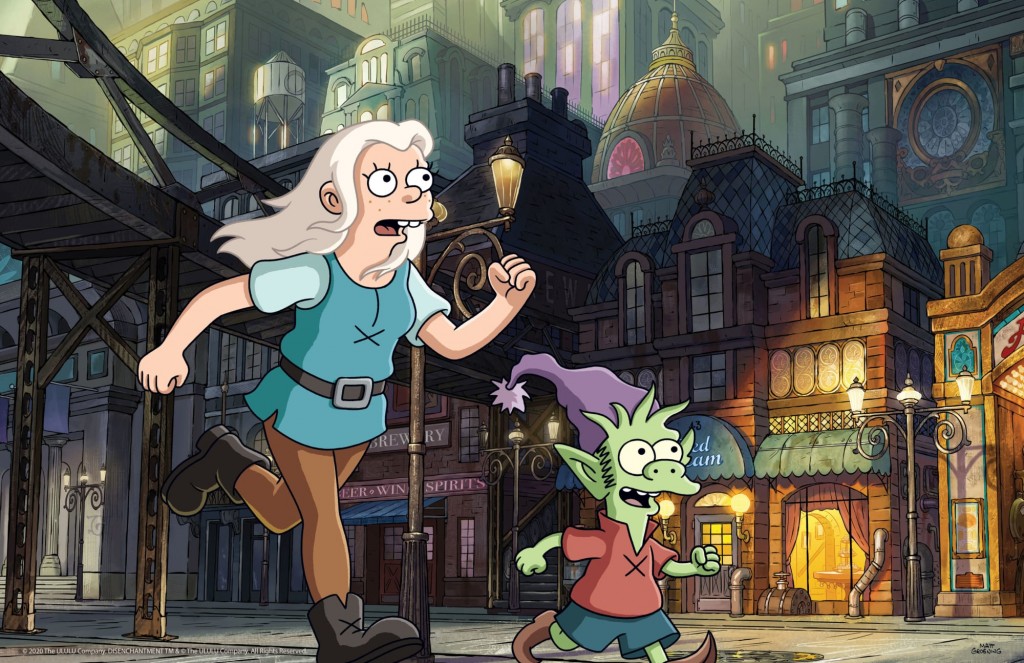 Netflix is notorious for canceling fan-favorite shows, but “Disenchantment” has yet to be one of them. “Disenchantment” just entered its fourth season, or “part,” on Feb. 9. The show follows the adventures of a rowdy princess named Bean (Abbi Jacobson) and her companions, a demon named Luci (Eric André) and an elf named Elfo (Nat Faxon), who live in a magical medieval kingdom called Dreamland.

“Disenchantment” was originally launched on Netflix in 2018, showcasing witty jokes and clever one-liners that had people hooked. The show's creator Matt Groening is also behind shows like “Futurama” and “The Simpsons,” which is evident by the animation style all three shows share.

Seasons one and four are closely tied together with allusions to old jokes and characters. Season four opens with Bean in a wedding dress, much like the first episode of the whole series. In both of these scenes, Bean is meant to be married for the purpose of an alliance orchestrated by either of her parents.

On top of this reference to the first episode, there are a lot of call-back jokes and beloved characters repeating iconic lines from past seasons. This makes the few first episodes of season four feel like they add nothing new to the overall plot.

One of the best things about the show is its large cast of characters: some are throw-away and others come back over and over. The adventures of Bean, Luci and Elfo traverse between heaven and hell quite frequently, so even in death your favorites are never truly gone.

This season in particular we see a lot of call-backs to characters that have been long forgotten, particularly from season one, like the party-crashing vikings.

This season, we see development from Bean as she realizes her feelings for a mermaid she met in season three named Mora. Mora is seen multiple times throughout this season rescuing Bean from life-threatening situations that involve her almost drowning. Bean's relationship with Mora is quite important because it's the first time we see Bean have a real romantic interest in someone.

We also see a lot of character development among King Zøg. He overcomes the mental breakdown he had last season, joins a monastery and meets his third child.

Additionally, there are subplots that have been set up since season one that are just now coming to cohesion. For example, one of the biggest mysteries we've finally gotten answers to is who Elfo’s mother is. This is a question we've been asking since the end of season one. We also learned more about the mysterious Trøgs, their relation to the elves and the elves' history with Dreamland.

That being said, there are plenty of subplots that don't seem to fit. This makes the show confusing and as much as I want to love how unexpected every big reveal and new plot twist is, it's hard when nothing seems to fit together, even four seasons in. There's too much going on, and a lot of it rarely affects Bean and her companions directly, making it almost uninteresting despite the characters involved.

Though I do love the characters and fascinating world building, I do wish that I could see an obvious direction the show was taking. That being said, I definitely can’t wait to see where the next season takes us and I think that it's a great show for fantasy lovers with a darker sense of humor.