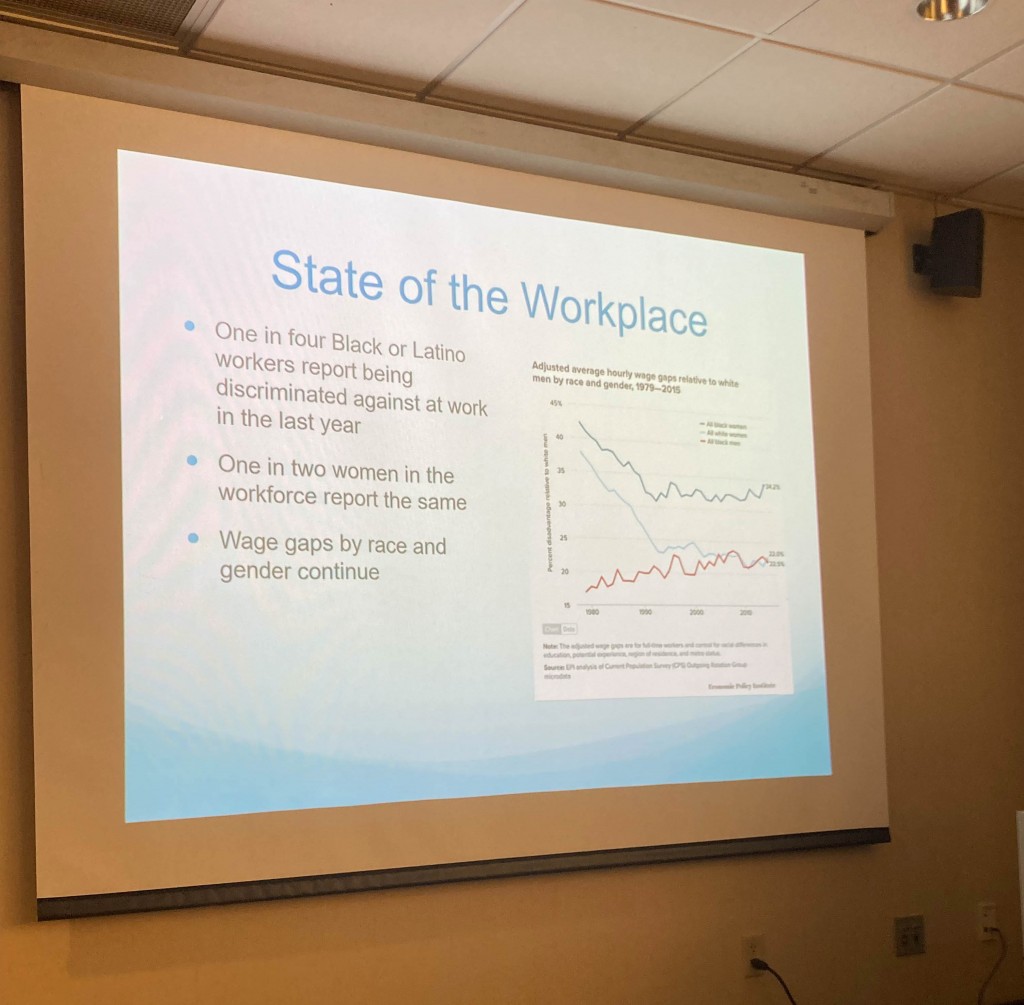 Speaker Christopher Kleps, a professor at Ohio State University, discussed the ambiguity of employment discrimination law in front of students and faculty on Feb. 10. The event was the first of the Law and Society Speaker Series.

According to Kleps, employment discrimination law “leaves a lot of room for judicial discretion” and it is often up to a judge’s perception of a case in whether or not discrimination took place. The premise of his talk started with legal constructionism, which is the legal approach he uses in his research.

“The law itself is socially constructed and constructed by specific parties in specific contexts,” he said, explaining that law should be looked at in terms of day-to-day operations as opposed to legal formalism, where cases are understood solely by looking at case law and records.

In the workplace, one in four Black or Latino workers have reported being discriminated against in the past year, a Gallup poll shows. Kleps introduced studies about the types of discrimination, given that they are more covert than overt.

“We have some great studies where we send out identical resumes with identical information. All we change is the names. One of the names is changed to be a stereotypically Black name,” Kleps said, explaining that these groups had a lower chance of being hired.

“Substantively, [employment discrimination law is] still really important,” he said. “Many people say we’re living in a post-racial society but the data doesn’t say so.”

He laid out four questions for his discussion, the two most important being what lay people — those who do not have professional knowledge on the subject — think counts as discrimination and what cases win. In this context, he was referring to employees, employers and ordinary people.

Perception also plays an important role in Kleps’ research because perception is shaped by individual identity and social context. Two people might perceive the same situation in different ways. He said that things like local cultural norms and the race of the supervisor matter in how discrimination is perceived.

When it comes to who wins a case, he said it is difficult to predict ahead of time. His “who wins” question is the same as the one he posed about lay people, but for judges.

“They all have roughly the same shape,” Kleps said about a series of graphs he showed the audience about the contexts in which white and Black judges rule. “And the shape we’re going to find is that as racial bias goes up, African American judges are more likely to rule in favor of plaintiffs. For white judges, as perceived racial threat goes up, the judge is less likely to rule in favor of the plaintiff.”

He ended the discussion expressing the importance of lived experience in interpreting what is and is not discrimination in the law based on his research.

“I do think it’s evidence for getting rid of the idea of thinking of who is the best judge and bringing in lived experience as a factor,” he said.

The next installment of this series will take place Feb. 18 at 1:45 p.m. inside the Alumni Lounges. The talk, "’This Unfortunate Development’: Incarceration and Democracy in W.E.B. Du Bois" will be led by Elliot Mamet of Duke University.