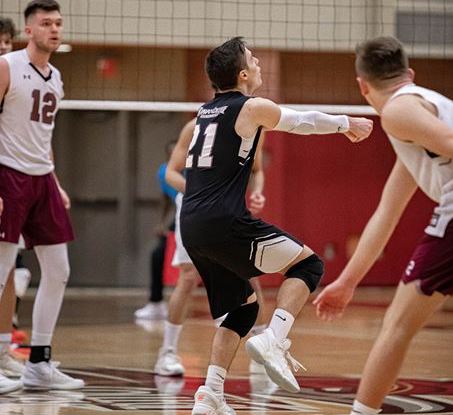 The Ramapo College men’s volleyball team split a tri-match against SUNY Purchase and Marymount University on Tuesday, Feb. 15. The Roadrunners’ win in Skyline action over Purchase kept them undefeated in the conference of the season.

Ramapo was led against Purchase by outside hitter Andrew Finnegan, who posted 13 kills on 18 attempts with zero errors in the match. Finnegan also ended up hitting .722. He was helped out by Simon Moeller, who did a little bit of everything. Moeller finished the match with seven kills, three aces, four digs and a block.

On defense, it was Tyler Plitt who led the way for the Roadrunners with eight digs. Leading the team in assists was Josh Titus who racked up 27, helping his teammates out all game. Jack DiGirolamo also had an impressive outing, posting five kills and leading the team with two blocks. As a team, Ramapo hit .471 in the match, compiling 38 kills on 70 attempts and only committing five errors.

For Purchase, it was Joe Higgins and Jeremiah Huntt leading the way compiling eight and four kills, respectively. Idris Idris tallied 10 assists and Jasper Zeray ended up with seven digs to lead the team.

In the second match of the day against Marymount, the team was once again led by Finnegan, who recorded 15 kills and added five digs, one assist and one ace. Another player to note in this match was Jason van der Wilt, who posted 12 kills and four digs. Titus led the team in assists for the second straight match, this time dishing out 33 of them along with two kills, two aces and five digs. Plitt had 11 digs, two kills and three assists in this match. As a whole, Ramapo collected 40 kills on 109 attempts and committed 14 errors.

Marymount was led by Ervin Harrell. He had 12 kills and also added one assist, one ace and eight digs. Raymond Tarasi was second on the team in kills with 10 to go along with his four digs. As a team, the Saints hit .341 in this match with 43 kills on 91 attempts and committed 12 errors.