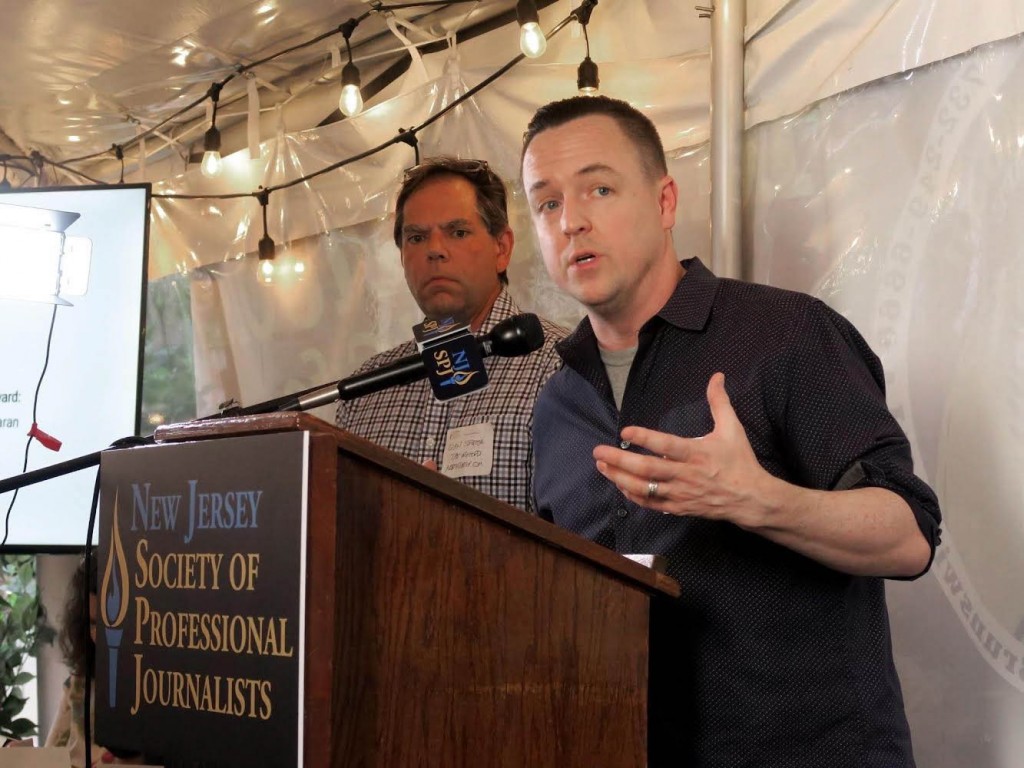 At the end of Wednesday’s production nights, Sean Oates would take his regular route home with a first stop at JB Offset Printing in Westwood, N.J., dropping off printed master pages for Thursday’s publication. Only a few hours later would he find himself there again, loading his car with bundled stacks of newspapers ready for distribution before heading to Ramapo.

Oates wheeled the piles of papers on a cart across campus, delivering them to each newsstand, which inadvertently became his Thursday morning routine — sometimes with the help of one or two other staffers. That year, the pages were filled with hard news stories that both challenged him as a reporter and taught him the value of collaboration.

“The teamwork that it takes to produce a newspaper, and the dynamic that you feel when you're in a newsroom — The Ramapo News was my first exposure to that,” he said during an interview.

The joint effort required of reliable and functioning newspapers has remained consistent through his work post-graduation at The Record and NorthJersey.com and now as the Atlantic Region multimedia director for Gannett, where he oversees all local photo and video coverage across five states. Even so, he still returns to some of the more foundational lessons he learned during his time at The Ramapo News.

Though his current field is less demanding of traditional reporting styles, he remembers working on breaking news stories that were, at times, outside of his comfort zone. Classes like Writing for Broadcast Media and Producing the Newspaper prepared Oates for on-site coverage.

He remembers working on the newspaper during production night when Oak — a new dorm at the time — flooded from the building’s sprinklers. The news staff had immediately hurried over to take photos and cover the story live for that week’s issue.

“For a weekly newspaper, it was really cool to see something in the pages that had just happened the night before,” he said.

This type of coverage was exactly what Oates had hoped to bring to the paper, especially after finishing his position as news editor the semester before. From reporting on college-related lawsuits to greek life controversies, he successfully added more topical and important articles to the front page.

Oates explained, however, that there had been moments where he seemed to have gotten in his own way, finding each new step in his position too big for him to tackle. Though working in a group provided Oates with some relief, he would personally look to the mentorship and guidance of technical adviser Dan Sforza for support.

“The person who assured me that I could do it and have my back the whole time was Dan,” he said. Sforza, a constant figure that many past and current staffers at The Ramapo News turn to, offered Oates the editor-in-chief position, and soon after, a full-time job at The Record.

The premise of the work Oates initiated outside of Ramapo is, to an extent, distant from the education he received and was instead self-taught. Rather than writing and editing, he has been creating interactivity across different mediums as a digital producer.

“I had the foundation that I got from being on the paper for those two years,” he said. “I understood ethics, methods and all the different factors that come into play when you're producing journalism.”

In one of his journalism classes, Oates created a website for The Ramapo News as a project, but, as he put it, the page “went away” with him. Yet, it was a pivotal assignment that nodded at the digital line of work he would pursue later in life.

Most distinctly, his department collectively cataloged the lives of several high school football players whose promise of a scholarship was put into question in recent multi-part docuseries “Playing For a Way Out.”

“That sense of teamwork really carried through in my career afterwards,” he said. “Every person has so much to contribute that creates the end result. And, you know, you really can't do it without collaboration amongst the whole team.”