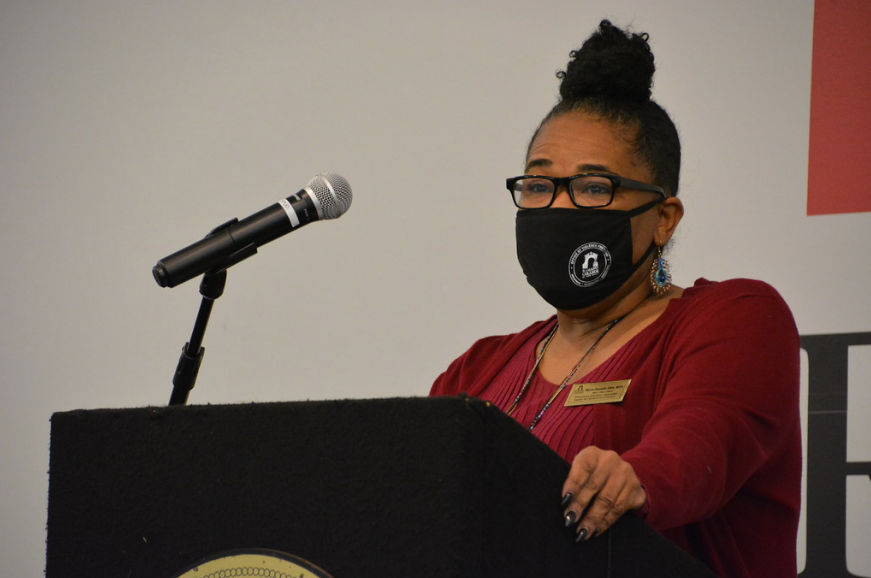 The Women’s Center and LGBTQ+ Services gathered students, faculty and staff in Friends Hall on Feb. 28 for the opening proclamation of Women’s Herstory Month. Through this event, Ramapo College integrated the meaning behind the month into campus culture and gave due recognition to those who continue to combat sexism in spaces of higher education.

Marie D. Attis, the interim coordinator of the Women’s Center, opened the event with a warm welcome to attendees who came to celebrate "women's past, present and future." The national 2022 Women’s History theme is “Providing Healing, Promoting Hope,” in accordance with how two-thirds of frontline workers in the pandemic have been women.

Attis named examples of female empowerment throughout history — from Byzantine Empress Theodora, whose accomplishments included passing strict laws to prohibit the trafficking of young girls, to Ketanji Brown, the first Black woman nominated to serve on the Supreme Court — to celebrate women’s strengths, contributions and resiliency.

The college contributed to this trend by appointing its first female president last summer, Dr. Cindy Jebb. Jebb broke barriers at her previous job as well, serving as the first female dean at West Point.

“Ramapo College is committed to hosting activities to celebrate the contributions of women,” she said.

Jebb thanked the Women’s Center for its contributions to an equitable campus, then officially proclaimed March to be Women’s Herstory Month at Ramapo College. Her proclamation contained multiple points of connection between the college and feminism.

She emphasized that recognizing women’s past accomplishments is moot without recognizing that there is still more work to be done. Director of Title IX Kat McGee proceeded to talk about the historical struggles of making a space for women in higher education.

As the 50th anniversary of Title IX approaches, she stressed that it is important to remember how colleges discriminated against women with fixed acceptance quotas, higher academic standards and limited financial aid.

Making room for women at Ramapo took years of community dedication. Inspired by students struggling with sex-based struggles, professor Lynne Farrow asked several coworkers to merge their offices to create the college’s first Women’s Center in 1972. Two years later she secured official funding and had it recognized as a campus office.

"As a campus, we needed to have a space for this type of… activism," McGee said.

McGee concluded her speech by asking attendees to shatter the glass ceilings that still exist for the sake of the next generation. With perfect timing, she exchanged places with senior Khalisah Hameed, office manager of the Women’s Center and LGBTQ+ Services.

Hameed read “Because I Am My Mother’s Daughter,” a poem inspired by the mother figures from the parent teacher organization (PTO) she attended. PTO members were her role models, and as a result Hameed dedicated the piece "to women in academia." Emotional, personal lines such as, "I never knew love to be hungry because I am my mother's daughter" drive the poem.

After the performance, Alana Wolf, a staff member at the Center for Student Involvement, summarized the upcoming events being held in honor of Women’s Herstory Month. The full schedule is available on the Women’s Center website, but highlights include activist and author Hope Giselle coming to campus as a guest speaker on March 9 and a month-long donation campaign for domestic violence survivors.