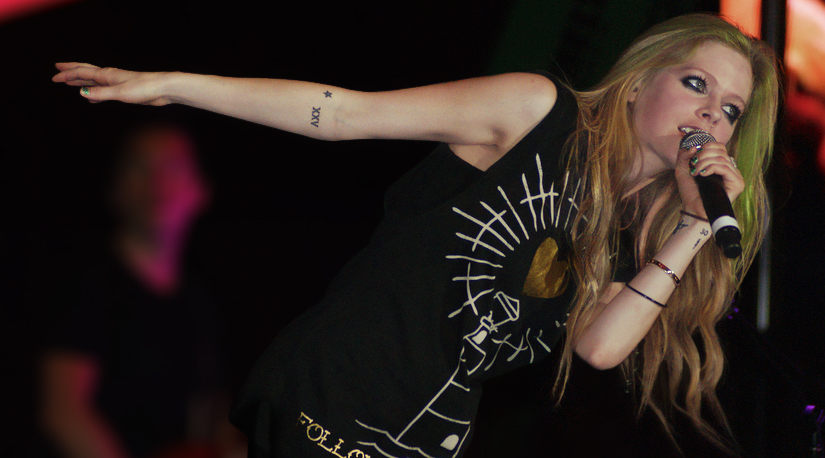 Calling all retired pop-punk kids: loosely wrap your striped ties around your neck and dye a strand of your hair pink because Avril Lavigne is back and more powerful than ever.

“Love Sux” is Lavigne’s seventh studio album, and it feels like it is fresh from the early 2000s, perfectly matching the girlpowered, pop-punk style that made her debut album “Let Go” a massive success. Although Lavigne is now 37, her music still channels the 16-year-old rule-bending rocker girl we fell in love with 20 years ago.

Similar to “Let Go,” by far her best album, “Love Sux” feels like the background track of your stroll through a dimly lit Hot Topic, wearing the tightest pair of black skinny jeans you could find with a flannel tied around your waist. It is a classic rendition of pop-punk, and it is certainly one deserving of praise.

The opening track, “Cannonball,” immediately draws in the listener with shredding electric guitars and the lyric “like a ticking time bomb I’m about to explode.” This is a powerful opening, honestly one of my favorites on the album. Lavigne asserts her return to the music scene and makes it one that will not be forgotten. The song goes harder as it progresses, as the drums and melodies set up the edgy tone of the remainder of the album.

“Bite Me,” the album’s lead single, is another standout song. It closely resembles the composition of possibly Lavigne’s most popular song “Complicated.” It starts out with rough, ballad-like vocals paired with quiet strums. Though the song sounds a bit mellow and channels the same type of hopelessness of “Complicated,” the lyrics are centered on embracing self-worth, which is found in lines such as “forever and ever, you’re gonna wish I was your wifey” and “I gave you one chance, you don’t get it twice.”

Perhaps one of the best songs of the album is “All I Wanted” featuring Mark Hoppus of rock band Blink-182, one of Lavigne’s biggest music influences. The song is the epitome of 2000s punk rock, and both of the singers’ rich, unique voices mesh interestingly well together. The build up of guitars and drums in the song and catchy chorus.

Unlike her duet with Hoppus, her two other featured tracks land as the weakest songs on the album. Machine Gun Kelly (MGK) sings as the male perspective on track two “Bois Lie,” and blackbear sings and raps on “Love It When You Hate Me.”

Each artist is fairly new, so their features on the album are probably done with the intent to keep Lavigne fresh and relevant. However, MGK and blackbear are very similar with their punk rock meets rap style, so each of their features felt weak and repetitive. I think each song could have been successful with just solo vocals from Lavigne, but even with their flaws, the songs still are enjoyable to listen to.

Another small flaw I noticed was the consistency of every song, which is noticeably impressive, but I find the songs too similar to one another at times. Each song has their own quirks, themes and styles, however, if you are not paying enough attention to what you are listening to, you might not realize that a new song is playing. Oftentimes, the songs transition almost too well into each other.

Despite this, I still am completely fond of this album and the themes of reclaiming oneself after a breakup. Though it is mostly upbeat and displays not caring about the ex, a few songs do exhibit grief with rather powerful ballads. “Avalanche” and “Dare To Love Me” allow Lavigne to express her vulnerability with listeners and capture the pain that may linger below a confident attitude.

The last track on the album, “Break Of A Heart” is the perfect cohesion of party pop vibes and punk rock, all while spotlighting the themes of moving on found throughout the entire LP. It ends powerfully with the lyrics “so I guess it’s goodbye,” which is a killer way to wrap up an album.

“Love Sux” successfully captures Lavigne’s true musical roots, and it is an overall new and improved nostalgic blast of an album. It is the closest to her 2002 sound, but it does not sound dated, despite its influence. Her lyrics have matured, even when they still feature her classic “na na na”s and varied “oh”s that leave listeners easily singing along, air drumming and head banging.