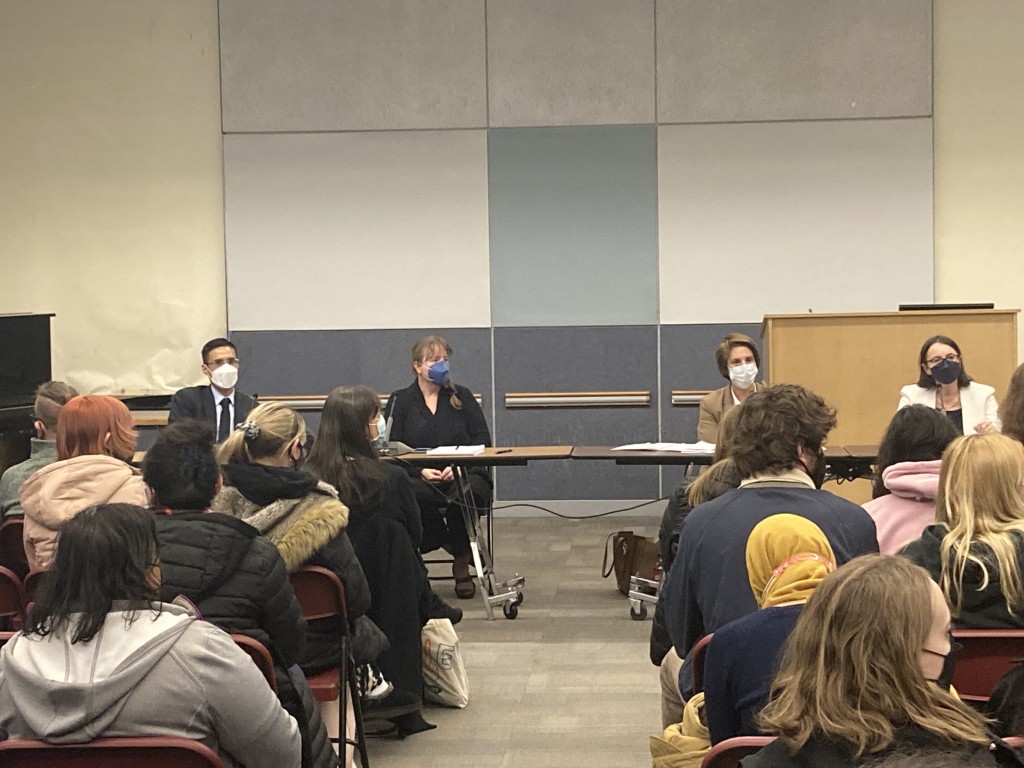 The focus of the panel was putting the conflict into context by examining the root causes and discussing its long- and short-term implications, both international and political.

“I wish I could say I’m excited, but I’m not,” Serban said in reference to the large crowd that attended the event. “This is not an event to be excited about. This is a time of great anxiety and fear.”

Each panelist discussed an aspect of the conflict tied to their specialty: Jebb drew upon her expertise as a military intelligence officer and personal experience with the Cold War; George spoke about ethnic politics to explain how Putin perceives the situation and how his past actions align with his current actions; Chen spoke about China’s relationship with Russia and their reluctance to get involved.

From a military intelligence perspective, Jebb said Putin’s actions are not driven by ideology, but pragmatism. She explained it in the context of Putin’s strong sense of nationalism.

George said the “circumstances are tragic and horrific beyond words” in Ukraine. Drawing from her specialty of comparative politics, she discussed five ways in how Russia’s current actions are similar or different from its past actions.

One of the most important points George made is how the underlying thinking in Putin’s actions stems from the collapse of the Soviet Union due to how devastating it was for the Russian people.

“Think of the worst time you experienced during the pandemic and multiply it by one thousand,” George said. “There was no certainty of jobs or currency.” She also said there was no certainty of laws when the country went three years without a system of governing laws. Putin’s worldview is one of nationalism and restoring Russian power.

She explained that from Putin’s perspective, his actions have been efforts to redress the concern of Russian power. He views Ukraine’s independence as a fallacy and sees the invasion as “efforts to unite Russians together.”

Putin’s past actions also reflect this. George gave the annexation of Crimea as an example of what she called “a kernel of a reason for people to look away.” Putin’s rationalization was that ethnic-speaking Russians, people for whom Russian is the native language, lived in Crimea and Crimea voted to secede and join Russia, even if the vote may have been forced.

She also drew parallels to Russia’s invasion of Georgia where she described it as a countervalue strike. The Russian military used custard bombs on the Ukranian people and targeted civlians and noncombatants, just like in Georgia.

“What we’re saying is we want to harm you. We want you to give into our demands,” George said when describing how a countervalue strike is a deliberate attack on the people to get the enemy to surrender.

Chen said China is going to be the greatest geopolitical test of the 21st century and commented how the country has been seemingly absent from the news cycle.

Chen also said the anti-western sentiment is growing in China and has all but outright supported Putin’s actions.

“His support is tacit. The Chinese government has all but supported the invasion,” he said.

Chen also discussed the implications for China in regards to the Ukraine invasion. The underlying one is China wanting the western world to see how the U.S. liberal world order is not the only world order.

The two other implications Chen discussed were how Taiwan will react since “today’s Ukraine will be tomorrow’s Taiwan” and how hypernationalism could lead to an escalation of nationalism among the world’s great powers.

The event went over the planned time with many questions from the audience during the Q&A session, but Serban and the panelists appeared amenable to hosting a future discussion panel that answers more questions and addresses the conflict as it continues to evolve.