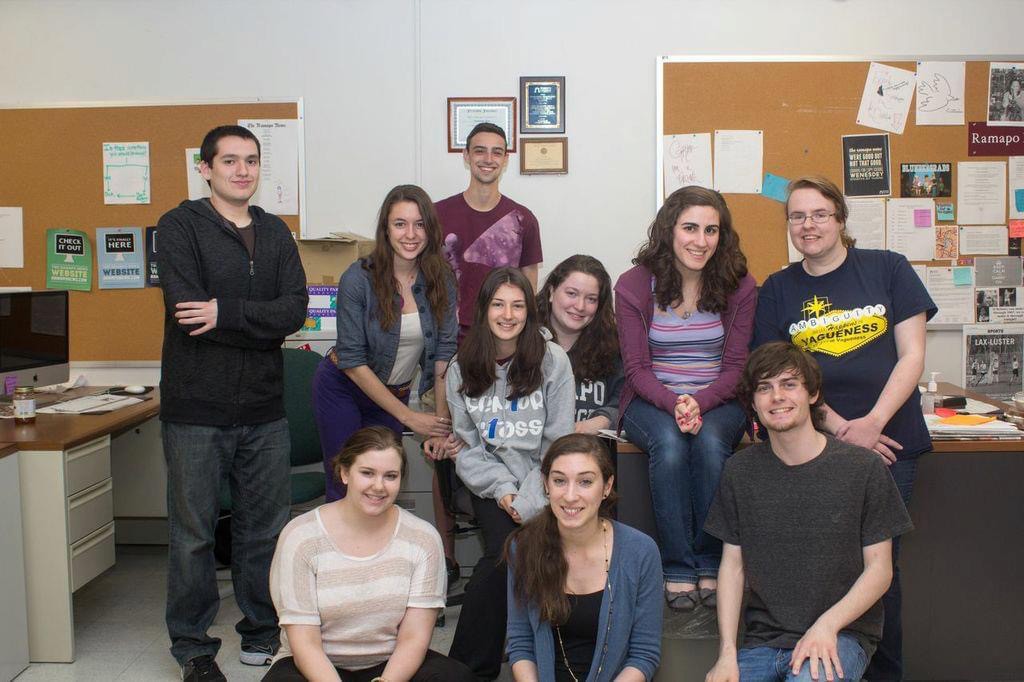 Hurricane Sandy left thousands of homes damaged, millions without power and almost all of New Jersey devastated. Ramapo closed its offices, effectively shutting down their campus that day, but 2012 Editor-in-Chief Nicole Alliegro and her news staff met to initiate their first major breaking news story.

“We were like, ‘Well, we’re around. Let’s go report,’” Alliegro said during an interview. “I remember being super proud [that] my staff wants to make a newspaper.”

The group published an eight-page special Sandy edition that following week, which included original photos of the storm’s destruction and multiple story angles packed with local appeal, covering surrounding towns. It would precede their next exclusive issue, which centered around Barack Obama’s second presidential election win.

These were only a couple of the many larger projects Alliegro oversaw and delegated through late Wednesday nights, including a revamped print design and newly established online presence. During her two years as head editor, Alliegro and her news team would set the groundwork for future staff members to expand on.

“The thing that I wanted to do was see it grow. We had all these great ideas and all these new people, and I wanted to just see it bigger and better,” she said. “And, you know, that's what every editor hopes for is to see it continue to thrive and to grow and to be bigger than anything you could have thought it would be.”

Though Alliegro was not as hands-on with the developing enterprises inside the newsroom, she was an active resource for her co-editors, who often took initiative when approaching the digital realm of journalism. Most significantly, then-Web Editor Kaitlin McGuinness launched the publication’s first website in fall 2012, during Alliegro’s first semester as head editor.

“It felt very experimental, even in class. Our teachers were like, ‘Try this, try that, try this multimedia thing, try it.’ It was just like, whatever stuck,” she said. “It was this kind of weird interplay of how do we use something that we have grown up with? And that is so personal to us.”

More visually, graphic designers on the team were determined to modernize the paper’s layout, and move from its obsolete look. Between switching to new paper weight, printing in color and styling each section, Alliegro had watched The Ramapo News seamlessly adapt to the changing dynamics of journalism.

In leading a group of writers and editors, Alliegro found that writing became secondary while being a mentor to others — especially since the majority of her staff was younger — was essential to her both academically and personally. During her senior year of college, and last round as editor-in-chief, she saw teaching as the true passion that underscored her dedication to The Ramapo News.

Still, the newsroom was often a learning curve for her, especially after transitioning to the highest position, as the needs of the newspaper and her own goals were sometimes at odds.

“I knew very quickly that if I was gonna grow the staff, if I was gonna wanna have young people on and have new ideas and new voices, it couldn't always be my way,” she said.

She explained that her core leadership skills were modeled after technical adviser Dan Sforza, whose quiet presence in the newsroom permitted students to problem-solve independently, but still made him available for taking any questions.

“Realizing that he always takes the role of stepping back and letting the thing run – that's what he did for me,” she said. “And here I am flourishing, doing what I think is a good job, so kind of trying to replicate that I think was really powerful to see him in that position.”

In understanding how to be a resource without micromanaging, Alliegro’s former position ultimately informed the type of work she continues today as a middle school Language Arts teacher.

“I'm proud that I had double time to really watch two staffs grow and mold and develop, and that, to me, goes back to the teaching,” she said. “It was my direction to sit and to make sure that the people who came through The Ramapo News were the people who were going to continue to do what we had wanted to do.”