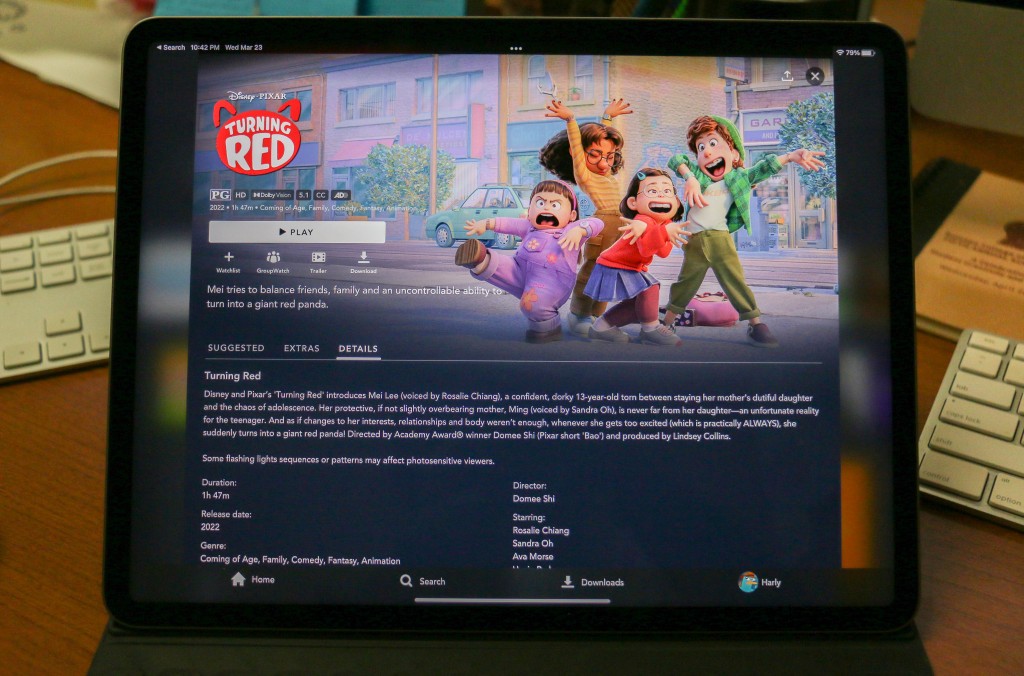 The coming-of-age story is one of the most tried-and-true storytelling formulas in today’s modern world. Growing up can be complicated and messy, so having media reflecting that process can help adults cope with that process in hindsight while also letting kids in the midst of that awkward time know that they are not alone in their struggles. When you combine that with the stories and traditions of people of color, there is potential for important messages of all kinds to come across.

Nowhere is that more apparent than in Pixar’s newest release, “Turning Red.” Although the film does tread familiar territory with its story beats, it is packed with enough beauty, charm and laughs to make it a blast to watch no matter what background you come from.

Taking place in 2002 Toronto, Meilin — or Mei — Lee is an enthusiastic and ambitious 13-year-old who loves nerding out with her friends and fawning over boy band 4*Town, despite her mother Ming’s overbearing nature. After a night of major embarrassment, Mei finds herself under a family curse: whenever her emotions grow too intense, she transforms into an oversized red panda. With the ritual to reverse the effects being far off in the future, her life gets even more complicated when 4*Town announces a Toronto stop on their latest tour. Despite the curse, Mei has to go all-out to make it to see 4*Town. In the process, she learns that this curse may actually be doing more good for her than she initially thought.

Pixar has always put out consistently beautiful movies, but “Turning Red” balances that with the right amount of eccentricity to make the film a breath of fresh air. From the characters to the film’s mystical aspects to Toronto itself, every part of this feels unique, lived in and cozy. Every detail feels somewhat familiar in a good way, and it sticks out as one of Pixar’s most engaging settings in recent memory.

While the film’s story is very formulaic, it does not feel boring at all. Everyone and everything in this movie is so charming that it is easy to be engaged with every dynamic in the film. The movie’s handling of overbearing parents and how one can both love and detest them simultaneously is done incredibly well, and the message it sends will continue to resonate for years to come, no matter where one comes from.

Memorable characters are something Pixar has always done a good job of making and “Turning Red” is no different. Mei herself has plenty of charm and comedic chops, thanks to both the writing and the stellar voice performance of Rosalie Chiang. Just eclipsing her is the complex nature of her mother Ming, brought to life by the always-enjoyable Sandra Oh. Balancing the act of being lovable and annoying is a fine line to cross, but Oh handles this in stride, acting as a great contrast for Mei while also being easy to sympathize with, and sometimes be heartbroken for as well.

These two are the core of the film’s story, and their strong performances both individually and together make for a blast of an experience. With a supporting cast that is just as strong, most notably Hyein Park as the lively Abby and Maitreyi Ramakrishnan as the deadpan and funny Priya, “Turning Red” has a cast that is just as compelling as its world.

“Turning Red” shows that some phenomena are universal experiences despite cultural differences that can exist. With an incredibly powerful theme at the heart of its tightly-written story and a cast that shines in every way, Pixar has hit a home run with this familiar yet cozy movie. It is incredible to see Hollywood exploring cultures outside of the societal norm, and with how popular “Turning Red” turned out to be, hopefully this will be a beacon for how enjoyable and important telling stories like these can be.