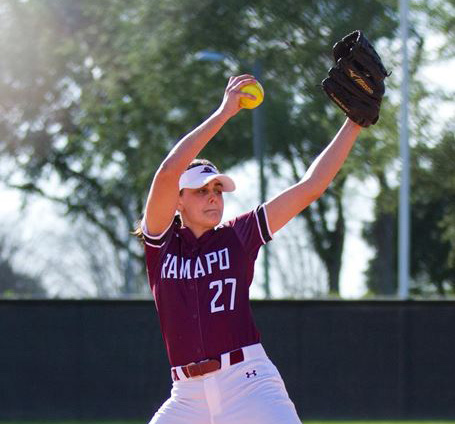 The Ramapo College softball team improved to 8-3 after their sweep of a doubleheader against the Mount Saint Mary College (MSMC) Knights. The Roadrunners’ two wins came in completely different ways. One was a convincing Ramapo victory while the other was a heartbreaking loss for the Knights, who fell to 1-8.

In game one, Ramapo took an early lead and never looked back. In the second inning, pitcher Mahogany Wheeler singled to left field and eventually came around to score on a wild pitch, giving the team some early offensive insurance. Later in the inning, Marissa DiPaolo scored on another wild pitch, making the score 2-0.

After a Katie Rygiel RBI single in the third, Ramapo blew the game open in the fourth, scoring three runs and making the score 6-0. Jaclyn Monaco drove in the first run of the inning with an RBI single through the right side, and then two more unearned runs came around later that inning after a fielding error by Sofia Gannon.

After allowing one run in the fifth, Ramapo shut down the Knights for the rest of the game en route to a 6-1 victory. Both teams were tied with seven hits on the day. Ramapo was led by Wheeler, who had two. The Roadrunners drew four walks as opposed to MSMC’s one and also recorded the only stolen base in the game.

The winning pitcher was Wheeler, who went the distance for the fourth time this season. She pitched seven innings, gave up one run, allowed seven hits and struck out three. Her record on the season is now 4-2 and her ERA is 2.48.

Game two was much more tightly contested. Once again, Ramapo took an early lead in the bottom of the first inning. Anna Messina drew a leadoff walk and advanced all the way around the bases on three separate wild pitches to make the score 1-0 in favor of the Roadrunners.

The Knights answered in the top of the third with a Samantha Ben RBI single, driving in Riley Norwood and tying the game at one. Neither team would score in the rest of regulation as MSMC’s Bridget Morris and Ramapo’s DiPaolo were locked in a pitcher’s duel. Because of this, the game was required to go into extra innings.

In the top of the eighth, MSMC’s ghost runner to begin the inning on second base would stay right there for the entire inning. The first out was recorded by Rygiel, who made a miraculous diving catch in foul territory. DiPaolo was able to work her way out of the inning unscathed after two more pop outs from MSMC batters.

Ramapo was able to secure the victory in the bottom of the eighth without even recording a hit. The ghost runner placed on second was Monaco, and she used her legs to propel Ramapo to the win. During the first at-bat in the inning, Monaco stole third. As the throw sailed over third base and into left field, Ramapo’s bench erupted as Monaco sprinted across home plate for the walk-off victory by a score of 2-1.

Ramapo led MSMC in hits by a total of eight to five. DiPaolo’s pitching performance kept Ramapo in this game long enough for them to win. She spun eight innings of one-run ball, allowing only five hits the entire game and striking out two.

Ramapo’s next games will be on Thursday, March 24 when they travel to Hoboken to take on Stevens University for a doubleheader. The games will be non-conference and the first pitch of game one will be at 3 p.m..