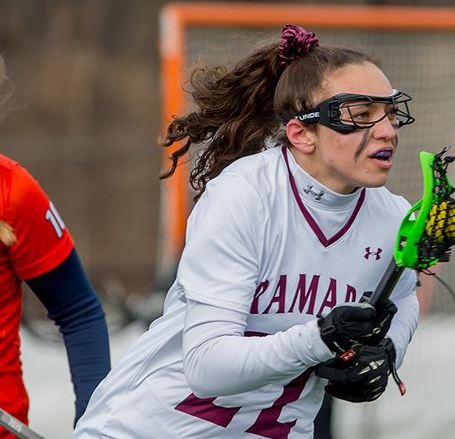 The Ramapo College women’s lacrosse team fell to 1-6 on the season following a 16-9 loss to St. Joseph’s College – Long Island (SJCLI) in a non-conference matchup. The Golden Eagles earned their first win of the season, improving to 1-3 overall.

The scoring was opened by Ramapo’s Kaylie Gresek less than three minutes into the game. It was her eighth goal of the season and it catapulted the Roadrunners out to an early 1-0 lead. Three minutes later, Ramapo extended its lead to 2-0, this time courtesy of Kelly Griffin’s 15th goal of the young season.

SJCLI opened the second quarter in a strong way, scoring less than two minutes in and cutting the score to 3-2. Once again, Ramapo was able to regain a two-goal lead after Griffin’s second goal of the game. However, that is where the tide of the game turned.

Three minutes after Griffin’s second goal, Melissa Newman scored to bring the score to 4-3. That goal was the first of seven consecutive goals by the Golden Eagles, all scored in just over five minutes. Three of those goals were courtesy of Newman, two were by Emily O’Mara, one was by Hannah King and one was by Trowbridge, her second of the game.

Before the end of the quarter, Ramapo was able to get one goal back after Esme Espinosa scored a free-position goal, making the score 9-5 in favor of SJCLI at the half.

SJCLI opened the final quarter of the game by scoring four more consecutive goals, pushing the score to 15-6. Ramapo’s final three goals of the game came from Espinosa, Griffin and Mason. Those goals, scattered around one more SJCLI goal, pushed the final score to a 16-9 loss.

Other notable stats for Ramapo were that Alyssa Curto tallied six saves and that the Roadrunners led the game in caused turnovers, 13-12. Ramapo also led SJCLI in free-position shots as the team had five to the Golden Eagles’ four.

Ramapo will look to rebound off this loss on Saturday, April 9 against Stockton University in the team’s first NJAC matchup of the season. The game will be played in Galloway, N.J. and is scheduled to begin at 2 p.m..