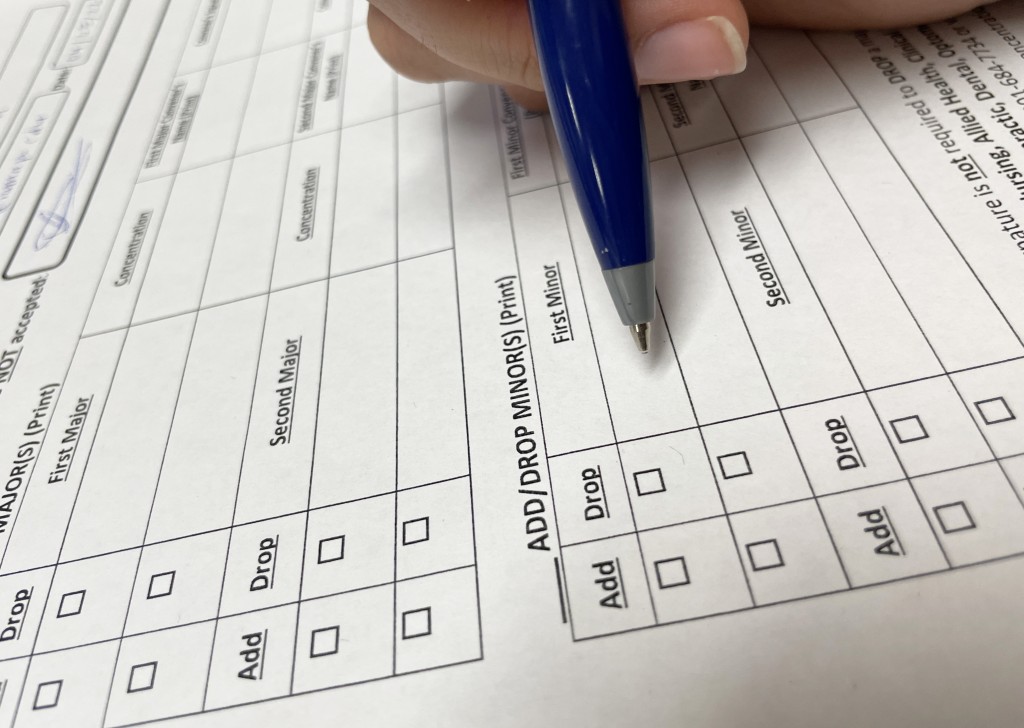 Last week we took a look into the minor programs at Ramapo and how enrollment varies across disciplines. Having the institutional perspective, we’re now looking to see how students navigate adding additional disciplines or focuses to their degree.

A student's likelihood of taking a minor varies by school. Schools with minors students are less likely to take, like Theoretical and Applied Science (TAS), are finding ways to diversify their course load while balancing the requirements of their major. Angelie Jaipersaud, a junior biology major, recently decided to add a psychology minor into her plan.

“I felt like I wanted extra courses to fill up the bio, but [the minor] also gives you a better understanding and a wider range of information so you’re not just honed in on just biology alone,” Jaipersaud said.

Another TAS student, junior Tenzin Sherpa, chose to double major rather than take a minor. Sherpa shared that the data science major actually requires a minor, so she paired it with her physics major to prepare herself for more industry jobs.

“It kind of fits well together, plus I wanted to stay four years in college,” Sherpa said. “Data science was new, and I guess it’s everywhere these days. It kind of matches up with my physics major.”

The sentiment of picking up extra requirements in order to stay in school longer was shared by Emma Psemeneki, a junior English major with a minor in crime and justice. Though not recommended in her advisement to pick up a minor, Psemeneki said she made the decision on her own, and wasn’t discouraged either.

Some students, despite being in schools where minors are readily built in, are not able to take the minor they had hoped to. Mckenna Byrne, a senior finance major, switched from a math major in her sophomore year and was left with no time to take a minor related to her new program.

“There should be a way to help students who switch majors,” Byrne said. “For me, the only option was to have a math minor, and I switched out of math [because] it was something that wasn’t fulfilling in my career path, so I definitely think there should be an option.”

The common issue of not having enough time may relate to the pattern of advisement in relationship to minors, which are not recommended to plan for until sophomore year. For many students, this is already too late.

“I didn’t realize I wanted to do a minor until end of sophomore year, so then I had to start doing the planning and figuring out what courses I need to do,” Jaipersaud said. “It’s all on the website, so it’s easy, but I just decided too late.”

Even though the Ansfield School of Business is most likely to advise their students toward getting a minor, Byrne still felt that switching majors was the barrier for her.

“It could be argued that there is an option, and it’s just to pay for extra semesters, which was just not a consideration for me,” Byrne said. “My academic advisor was strictly business based once I switched, so there was no cross-school minor I could've taken, or anyone I could’ve reached out to about it.”

Many students, despite difficulties, are still trying their best to add a minor, as the benefits vary from job eligibility to a better range of knowledge across disciplines. Sherpa shares that most students in her program are looking for that added layer to their degree.

“Everyone I know is trying to get a minor… but I think for physics majors, people who want to do theoretical physics, they end up doing a double major in math, or a minor because a lot of courses overlap,” Sherpa said. “I think that’s the main logic that comes to mind. If there’s a lot of overlap, why not take it?”