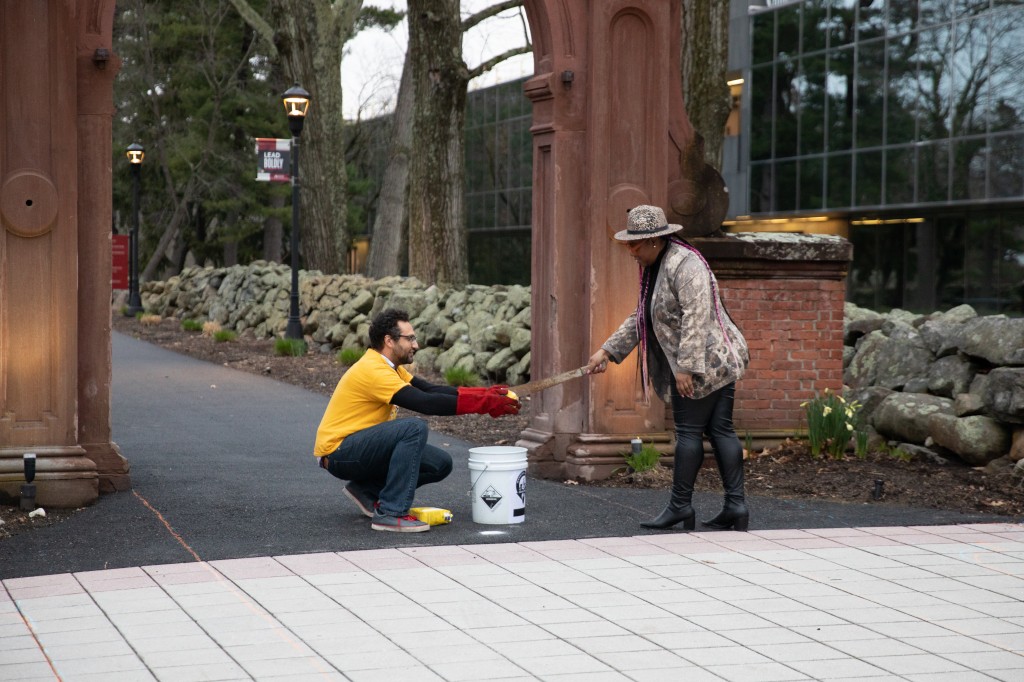 Multidisciplinary artist Jean-Marc Superville Sovak’s work has been on display in the Pascal Gallery since Feb. 16. Much of his art focuses on land acknowledgement, an act of recognizing the history of Indigenous peoples who lived or served on the land before other people came in and made their own living out of it.

In a talk featuring Sovak on Monday, March 29 in Kresge Gallery, he discussed his works in the gallery, as well as a special live art performance he would be doing on April 6. According to his website, his series “a-Historical Landscapes” “uses original 19th century landscape engravings typical of the Hudson River School, with the addition of images from contemporaneous publications such as anti-slavery almanacs and abolitionist tracts.”

Sovak found interest in Ramapo’s Arch for his Wednesday event, which is notorious for being used as the school’s logo. He had created his own inverted version of the Arch, where he added in images of kneeling slaves, similar to how a lot of his other work in “a-Historical Landscapes.”

This was translated into his live art performance titled “Stolen Sugar Makes the Sweetest Books.” The title is a play on the land’s history, which used to be home to Domino Sugar Refinery. The latter part of the title represents an educational institution taking place on these historical — and problematic — grounds.

When Sovak arrived on campus on April 6, he traced the shadows that outlined Ramapo’s Arch. The concrete tiles surrounding the Arch had a chalky blue and orange Arch mirroring it. His outline would help him create a Domino-sugared replica.

As he brought the gathered group of observers from the galleries closing ceremony in the Berrie Center to the Arch, he spoke briefly about his project and intentions, before beginning his full performance.

He explained that invocation comes from the word “invoker,” which in Latin means “to make a call.” Sovak wants to express that his invocation is calling upon higher powers.

Sovak brings up the writer and journalist Isabel Wilkerson, who he describes as “one of the most important modern day prophets,” and her book “Caste.” In her book, she makes an analogy that we should think of the history of our country as a house.

“But the house in this case,” Sovak said, while gesturing to Ramapo’s land. “Has a beam. The house is built upon a beam that is rotten, that is in need of repair.”

Ramapo College, he says, is a house that sits upon a beam. The beam is 300 acres of land that belongs to Theodore Havemeyer, who’s fortune from constructing the Domino Sugar Refinery paid for this land back in the 1800s.

“Ramapo College's very existence, the 300 acres here, is due to the blood of Africans who lived and died working in the cane fields of Cuba,” Sovak said during his talk in Kresge Gallery on March 28.

Sovak’s main goal is to encourage the leadership at Ramapo to properly acknowledge this land and its significant history. He understands that the Arch is the school’s biggest form of identification, so to encourage the school and its community to embrace its full identity, he outlined the Arch in sugar.

Before beginning his outline, Sovak pulled out a sharp sword, and asked audience members to slice open the white and yellow packs of sugar. Sovak kneeled in the center of the arch — similar to the slaves on his rendering of the Arch — and held out the sugar packs over a large container that the sugar could fall into.

After collecting all of the Domino Sugar, Sovak began lining his sketch while singing the lyrics to the 1983 hit song “Sweet Dreams (Are Made of This)” by the Eurythmics. Audience members joined in, filling the air with repetitive “Some of them want to use you / Some of them want to get used by you.” The singing lasted until the sugary portrait of the Arch was complete.

Sovak's interactive live art piece was historical and informative for the Ramapo community. The research and message he shared was new to many, and suggested a type of connection that viewers may not be aware of.

Thanks to Sovak’s research and dedication towards historical landscapes, hopefully more community members can become aware of the not-so-sweet history of Ramapo’s land and work towards acknowledging the lives lost for our education.