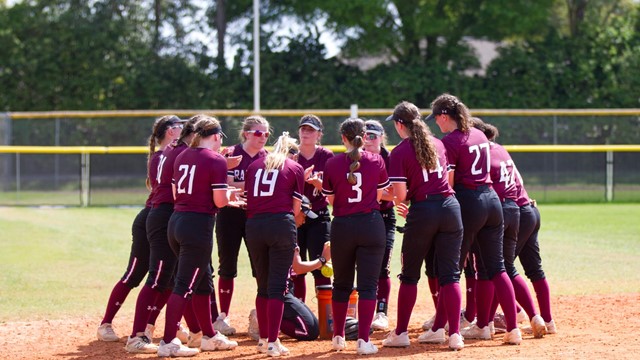 The Ramapo College softball team split a doubleheader on the road against Stevens University on April 13. After the split, the Roadrunners’ record moved to 15-6 and Stevens’ moved to 7-11.

In the first game of the day, Ramapo jumped out to an early 3-0 lead. Krista Verrino started off the top of the first inning with a hit by pitch and she later came around to score on an Alexis Corra double to make it 1-0. The next batter, Mahogany Wheeler, scored Carli Egan with an RBI single. The third and final run of the inning came from a sacrifice fly by Avery Bartolomeo.

Despite taking an early lead, Ramapo gave it right back as Stevens scored three runs of their own in the bottom of the inning. All three runs in the inning were unearned after the Roadrunners committed three errors.

After an uneventful second inning, Ramapo retook the lead in the top of the third. Katie Rygiel drove home Corra as the Roadrunners took a 4-3 lead. In the bottom of the fourth, Stevens went back on top and they would never let it go. Julia Baber hit a go-ahead two-run home run that gave Stevens a 5-4 lead.

Ramapo threatened in the top of the seventh after having the first two batters reach base. However, Stevens pitcher Erin Kreis induced a critical double play to end any chance Ramapo had at tying the game. The game ended with a score of 5-4.

Ramapo’s pitcher, Wheeler, was tabbed with the loss. She went the full six innings. Although she gave up five runs, only two of them were earned. She also walked three and struck out three.

In the second game, everything started similarly to the first for Ramapo. The Roadrunners took an early 1-0 lead in the top of the first on an RBI single by Rygiel. She scored Corra on the play, and this time Ramapo hoped to hold on to the early lead.

In the top of the third inning, Ramapo blew it open after collecting six runs in the inning. With one out in the inning, Corra started the big inning with a single and scored the first run of the inning after an error by Stevens. Marissa DiPaolo drew a bases-loaded walk for the second run of the inning. Jaclyn Monaco drew another bases-loaded walk to make it 4-0, and then Verrino singled to right field, scoring Monaco and two more after another error by Stevens.

After adding another run in the top of the fourth courtesy of a Bartolomeo sacrifice fly, Stevens was able to score their first run of the game. However, Ramapo answered back with two more of their own in the top of the fifth after another sacrifice fly, this time from Corra, and a wild pitch. The score was 10-1, and that ended up being the final.

Ramapo pitcher DiPaolo continued her stellar season, earning her eighth win of the season. She went five innings, allowed only one run and struck out nine of the 15 outs she recorded.

The Roadrunners return to action on Saturday, April 16 when they travel to face Rutgers-Camden on the road for a doubleheader. The first game is scheduled to take place at 1:00 p.m. and will be Ramapo’s fifth in-conference doubleheader of the season.