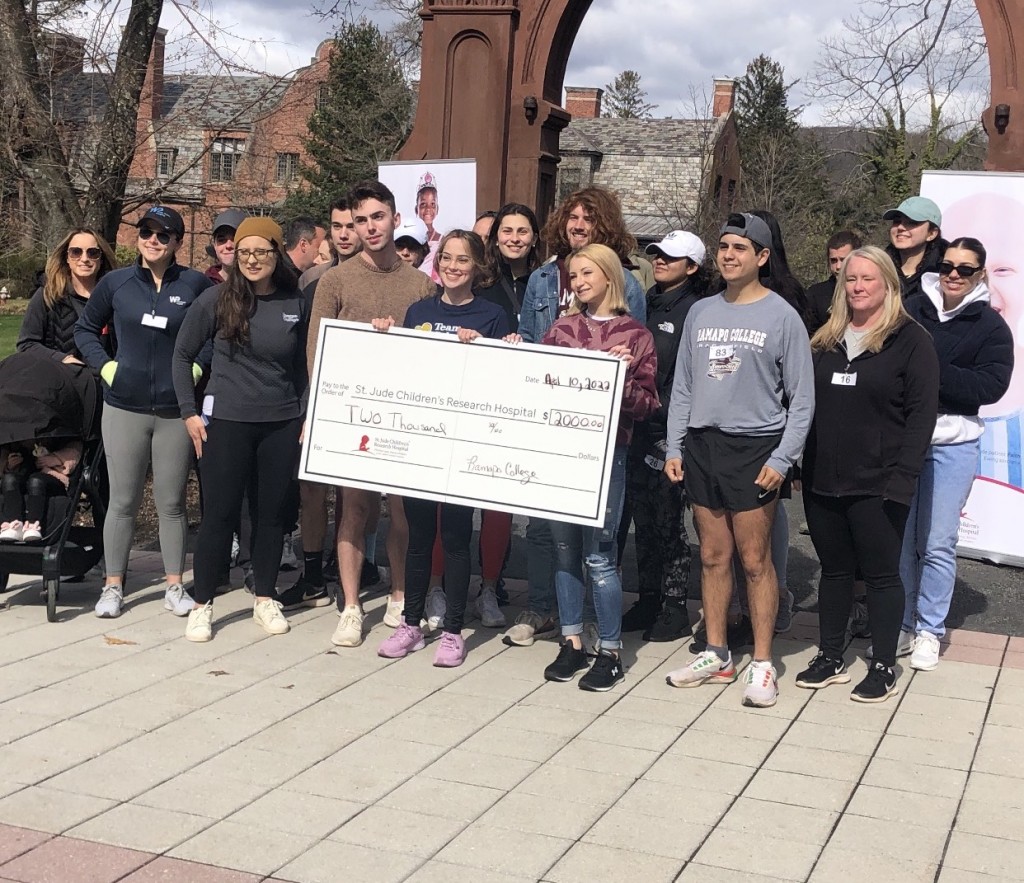 Ramapo College held a Road Run 5K fundraiser event on Sunday, April 10 underneath the Arch in the campus grove. The event was for St. Jude Children's Research Hospital, and each participant had an entrance fee of $20 to contribute to the donation.

Before the event kicked off, music played and pictures were taken of all participants and the organizers of the event: the RCNJ Republicans, the RCNJ Progressives and fraternity Alpha Phi Delta.

The final pictures were taken with a large boarded check donated by the school to St. Jude Children's Hospital, which was cashed at $2,000. Along with the online portion of the fundraiser, the total amount of fundraising reached $5,000, according to Amanda Williams, president of RCNJ Progressives.

The college has regularly been hosting events for fundraising and disease awareness. Last year, the Ramapo cross-country team participated in a 5k for mental health awareness. Three years before that, in 2018, the school introduced the REED Next program, which provided educational opportunities for adults in Bergen County with autism.

Despite the early weekend morning start, as the school’s student body prepares for finals season, spirits were high and students were cheerful to help the school’s cause.

“I feel pretty good. I’m getting some exercise and supporting a good cause,” said Christian Matthews, a freshman business major. “I’m happy to help out no matter what time it is.”

The outline of the racing trail began directly under the Arch facing towards the Bradley Center. At the end of the path, white chalked arrows indicated a right turn to Poplar Avenue, as runners would take the street all the way to Woods Avenue. Crossing through the Village at the end of Woods, the trail then goes up towards the Berrie Center side of the courtyard.

On the last lap, arrows pointed from the Laurel Courts parking garage towards Bush Lane, where runners finished at the Student Center. There, prizes were handed out and pictures were taken with the top three finishers.

“This is our big event of the year,” said Williams. “We got together with the Republicans and got it done, so I think it’s a good way to bring the school together.”

Though not coined as a political topic, Bionda Rizvani, RCNJ Republicans president,  had nothing but positive things to say about holding the Road Run with the help of Williams’ club.

“It takes commitment for this, but it’s for a good cause and it’s really exciting to have the turnout we did,” said Rizvani. “The Progressives are very sweet and it was super easy to work with them. There were no problems at all.”

In the next few weeks, the school will continue to hold events — whether it be volunteer events, fundraisers or a club — that will look to spread awareness and maintain the positive environment the school has worked to establish on campus.