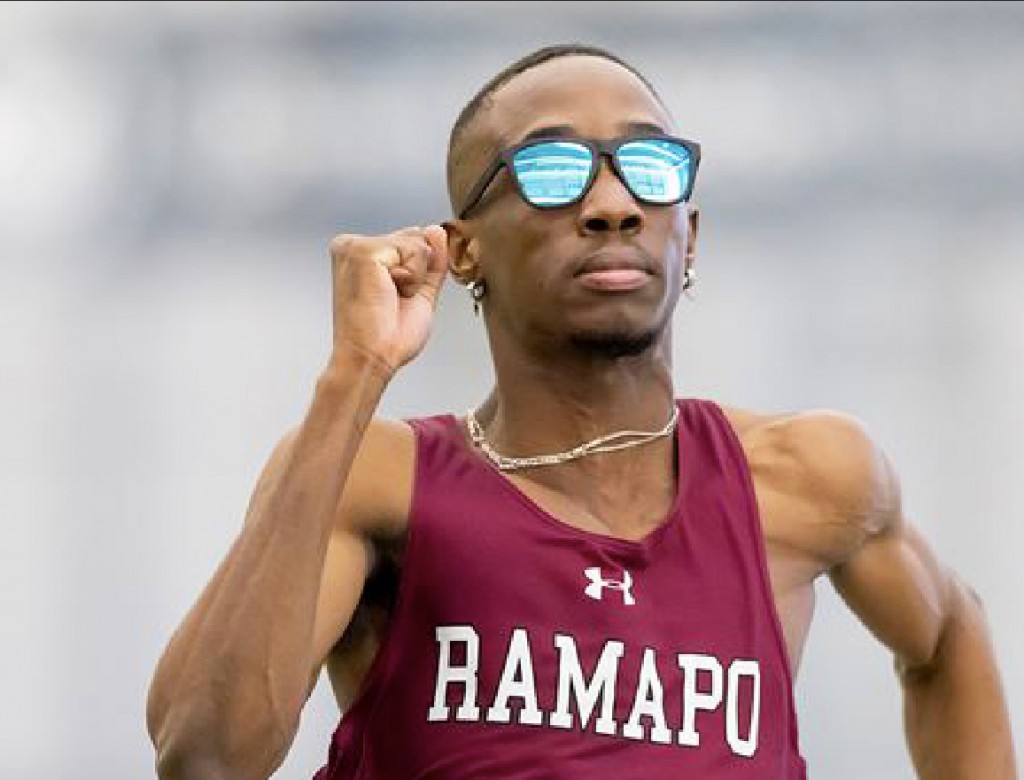 This past weekend, the men's and women's outdoor track and field teams competed at two meets. The Roadrunners were split up as some traveled to Moravian College for the Greyhound Invitational while others went to compete at Princeton University in the Larry Ellis Invitational.

At the Greyhound Invitational, the women had a notable performance. Gbarper Dwah finished first overall and now holds a new school record in the 100-meter dash at 12.13 seconds. Dwah's time tied her for the 14th best in NCAA DIII this season. Dwah placed 10th overall in the 200-meter dash at 25.50 seconds, which tied her for third all-time at Ramapo. With these times, Dwah will qualify for the AARTFC and ECAC Championship meets later on in the season.

Continuing at this invitational, the women's 4×400-meter relay team came in first place with a time of 4:14.54. The four Roadrunners who made up the team included Kacy Ewing, Rebecca Kneppel, Meredith Yaskovic and Dina Ayoub.

Ramapo women also placed in the 4×100-meter relay, coming in third overall with a time of 49.12 seconds. The team was made up of Delilah Cruz, Ayoub, Yaskovic and Dwah. This qualified the team for the AARTFC Championship meet later this season.

Members of these relay teams also had some individual bests. Yaskovic placed seventh in the 200-meter dash with a personal-best time of 25.36 seconds. This time will also qualify her for the AARTFC and ECAC Championship meets. Meanwhile, Ewing set a personal best time in the 800-meter race in 2:29.91, placing 12th overall.

Zoey Cassavell set a new personal best in the 1,500-meter race, as she clocked in at 4:59.80 coming in seventh overall and qualifying for the ECAC Championship meets. In the field, Ariel Nyamekye finished in 14th place overall, posting a mark of 10.73-meters in the shot put, qualifying her for the ECAC Championships as well. At the Larry Ellis Invitational, Lindsay McNeill finished 10th in the 5k with a time of 18:35.16.

The men's track and field team had similar success at both meets. At the Larry Ellis Invitational, Steven Fiumefreddo won the 10k race and set the new school record when he crossed the finish line in 30:47.53. Fiumefreddo, who was the only NCAA DIII runner in the race, broke a record set in 1989 by Andrew Latincsics — a Ramapo Athletics Hall of Famer — who had a time of 31:11.

Cheickna Traore broke his own school record in the 200-meter dash when he posted a time of 21.31 seconds. He finished fifth in a field of all NCAA DI athletes. In the 100-meter dash he set the new record with a time of 10.57 seconds. His time is currently fifth in NCAA DIII this season.

Chris Andersen finished sixth overall in the 800-meter run when he crossed the finish line in 1:53.90. Andersen also competed in the 1,500-meter race and clocked in at 4:00.02. Max Dubac finished 16th overall in the 400-meter hurdles with a time of 56.30 seconds. Both Roadrunners were the only NCAA DIII runners in their races.

At the Greyhound Invitational, Kenyon Fenderson finished third overall in the finals with a personal-best time of 10.84 seconds. For the 200-meter-dash he came in fifth place with a personal-best time of 22.35 seconds. Both times qualified him for the AARTFC and ECAC Championships. Dillon Karlson also qualified for the ECAC Championships in the 200-meter dash with a time of 23.07 seconds, placing him in ninth overall.

Matt Cortez won the 800-meter race with a time of 1:56.74. In the 5k race, Ramapo's Mohamed Nidaazzi and Jason Mercado placed in the top 10. Nidaazzi placed second overall, posting a personal-best time of 15:30.93.

In the 400-meter hurdles, Christian Santiago came in with a sixth-place finish in 59.69 seconds. Benjamin Straebler placed eighth overall, as he competed in the 3k steeplechase and posted a time of 11:09.51.

In the field, Jason Potterton placed fifth in the triple jump with a mark of 12.67-meters. In the long jump, he posted a mark of 5.79-meters and placed 12th overall.

Both Ramapo's men and women's track and field teams will return to action on Friday, April 22nd and Saturday, April 23rd when they travel to the Widener Invitational.