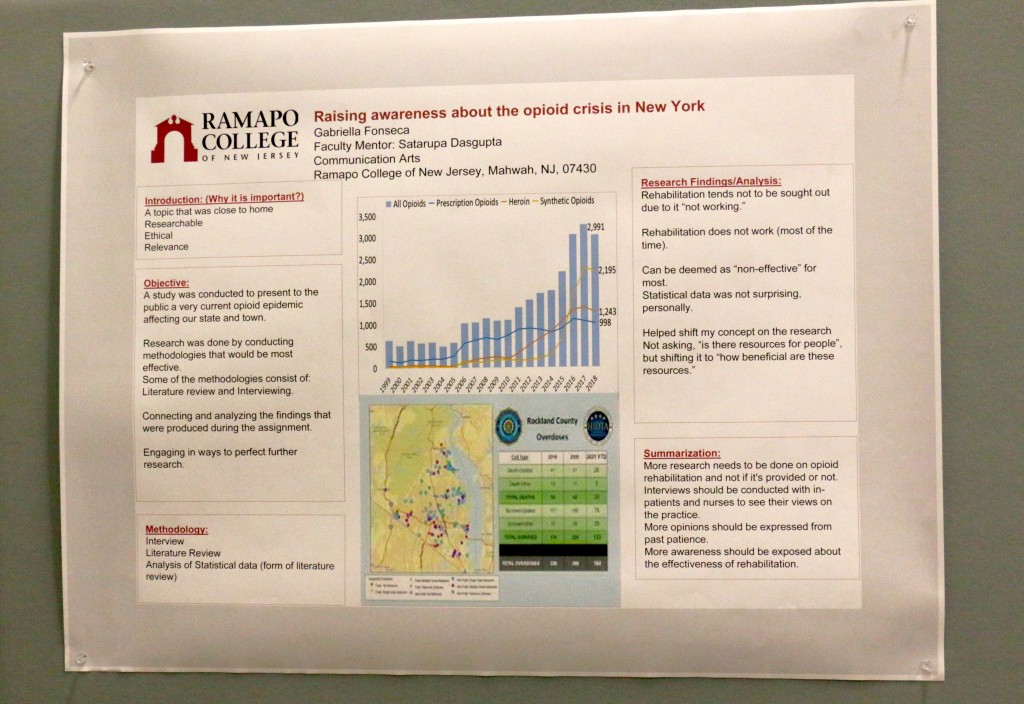 Ramapo hosted its 10th annual Scholars’ Day on April 20 in Friends Hall. This year’s event featured 29 faculty-sponsored student submissions across 16 majors. According to Ramapo’s Scholars’ Day page, the event “showcases some of the most exemplary faculty-mentored student creativity and scholarly activities undertaken in 2021-22.”

Poster sessions took place first and featured lively discussion among presenters, students, parents and Ramapo faculty. Students were able to talk about their projects and answer any questions attendees may have had about their research.

The idea for their project came from the decline of white ash trees over the past few years due to the outbreak of the emerald ash borer, an invasive species of insect that feeds on and kills white ashes. They used data collected from 2013 on red-bellied woodpecker foraging patterns as a basis and were surprised at how it compared to the data they collected.

“It’s pretty remarkable that eight years later, the red-bellied woodpecker’s preferences haven’t really changed,” LaDuke said, referring to the similarities in their data and the 2013 data.

Gabriella Fonseca, a junior communications major, conducted research on the opioid epidemic in New York. As a resident of New York, she said she wanted to find something to research about the state and asked friends what they thought were some pressing issues in the state to research.

“The most interesting thing I found was that originally, my research was going to be on what resources are lacking at rehabilitation centers, but that completely shifted during my interview process,” she said. “I realized that there’s enough resources, but people have expressed frustration at the rehabilitation centers themselves.”

She said her research took place over a 13-week period and her perspective on a lack of attention being shown towards the opioid epidemic still remains the same.

“I was extremely nervous and I didn’t really think mine would be effective or anyone would care, but a lot of people are asking a lot of questions and showing interest and it feels great and an honor to be here honestly,” Fonseca said.

Michelle Kukan, a freshman history major, researched the Mahwah Museum Veterans Project. The idea for her research came from looking for history-related volunteer opportunities in the area. The project described some of the volunteer work she did as well as some of the sources used to gather information for the Veterans Project.

“I think it’s cool. Everyone else’s projects look good too. I feel proud that I was able to participate,” Kukan said about presenting her poster.

Rihana Di Jesus, a junior psychology major, conducted research on mental imagery as a coping mechanism during the COVID-19 pandemic.

“I really like daydreaming. It’s one of my favorite things to do. I figured that since it helps me so much, maybe it could help other people,” she said when asked about where the idea for her research came from.

She said the most interesting finding from her research is that daydreaming does help decrease stress overall and helps people feel more connected to the world. She said her second hypothesis — social daydreaming would produce the greatest improvements in self-perceived social connectedness (PSC) — was proven correct by her research. It also showed that daydreaming only really affected stress and PSC and had little effect on mood or well-being.

One student from each school was also chosen to give an oral presentation on their research, which took place after the poster session. A complete list of all of the poster presentations and their abstracts can be found on the Scholars’ Day webpage.