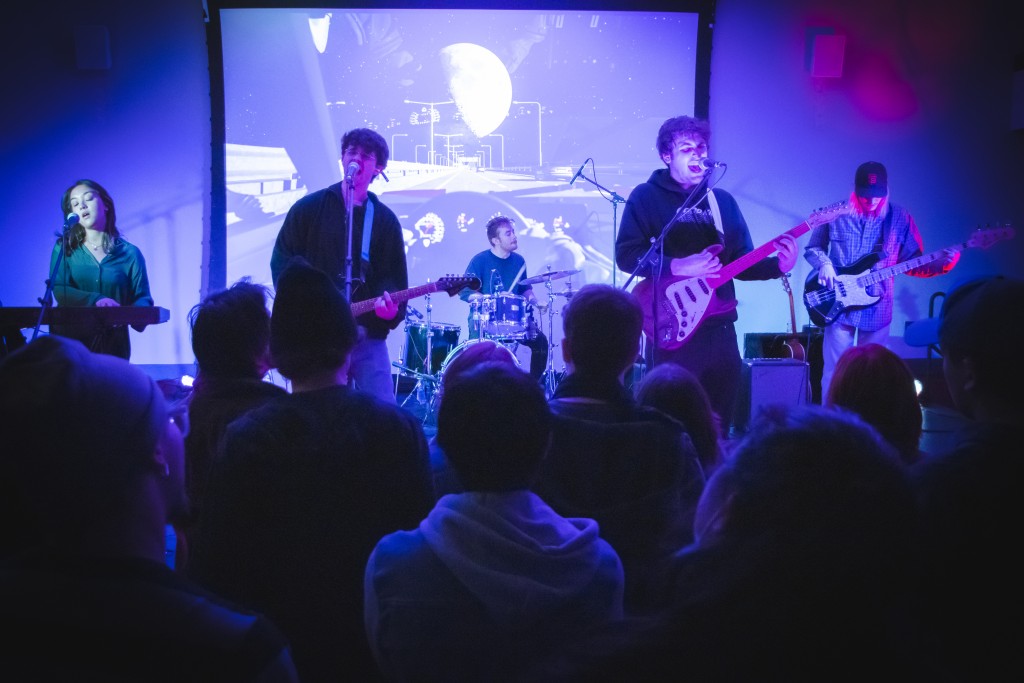 This year's Tuesday Night Live series finished strong with Phoneboy, an up and coming band in the New Jersey DIY scene. The show punctuated the end of their recent speed-run tour with Good Kid, where they hit seven cities across the country.

With only a few singles and one album out, Phoneboy has managed to rack up over 10 million streams since their start. Judging by the crowd, they can expect to add new fans from Ramapo to their following.

The group is made up of singer and guitarist Ricky Dana, singer and guitarist Wyn Barnum, bassist James Fusco, keyboard player and singer Jordan Torres and drummer Chris Nace, who’s linked up with the band while still part of his band Dummy. They’ve set down roots in Jersey, but Barnum and Fusco are old friends, both from California, and the group came together during college.

“Wyn and I have known each other for many years, we’ve played in bands and stuff since then so it sort of made sense that whatever project he was working on with Ricky, I could kind of pop in,” Fusco said. “You know we all just clicked, it started making sense. So that’s why New Jersey is the spot.”

Colleges like Rutgers-New Brunswick are known for being the place where new bands in the scene can get their start, playing basement shows and gathering momentum. Phoneboy has played a handful of colleges before Ramapo, but in their two tours they have been adding major cities to their growing list of successes.

“We started here and have played here so much, we just kind of wanted to get out a little bit more, see if we could expand, see if we have fans other places,” Fusco said.

Their music is reminiscent of a lot of artists, and a variety of names passed through Friends Hall as attendees tried to decide what the indie sound reminded them of. Dana says their biggest inspiration is Blink-182, but many agreed they share the vibe of artists like Rex Orange County.

“We try really hard to write things that are catchy,” Fusco said. “Songs that are stuck in your head when you hear it one time.”

Perhaps what’s most attractive about their music is how easy it is to get into. Even though their set was only an hour, people were picking up the chorus lyrics quickly to sing along. Like many small artists, they try to maintain a not-too-serious attitude, while staying professional as they build their career.

The group named off a number of other DIY bands they take inspiration and collaboration from. Their single “Nevermind” features local artist Justin Magnaye, and was a definite crowd favorite.

Fans can expect to see new music within the year, they said. Barnum joked on stage they’ve been calling their latest release new even though it’s been out for over a year, so listeners are anxiously awaiting more.

“We’ve been in the studio for months now and we are ready to put it out,” Fusco said.

Barnum said he and Fusco were impressed when moving to Jersey how many bands come from a relatively small area. It’s hard to say what it is here that breeds creativity in such numbers, but Phoneboy is a bright-futured product of the scene.

Though they do hope one day to move on from being completely self-done, they know they’ll always have their DIY start as part of their identity. Barnum says no matter where they end up, they’ll always be returning to New Jersey.

“We love Jersey, we love the DIY scene,” Dana said. “We are so excited for what's gonna happen this year.”