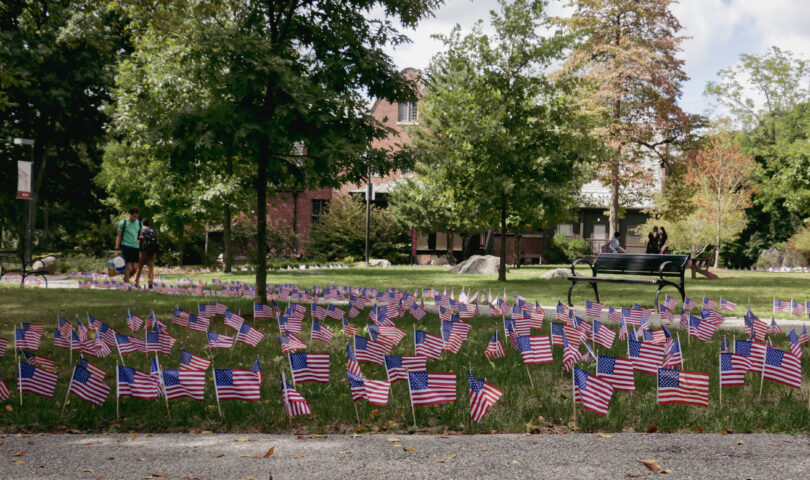 The Ramapo community met at the Arch on Sept. 12 for a 9/11 Remembrance Gathering hosted by President Cindy Jebb. Jebb invited Mahwah mayor James Wysocki, members of the Bergen County Board of Commissioners, State Senator Holly Schepisi and County Executive James Tedesco to speak. All of the speeches stressed the importance of coming together and never forgetting what happened on 9/11 or those who died.

Jebb spoke first, thanking the guest speakers for coming and establishing the event as a time of remembrance.

“We gather in this place as a community at this time to remember those who have fallen and those who have died, those who have lost loved ones. Let it provide us… with a moment to choose how to guide us in complex times,” she said.

Wysocki spoke next, sharing his story of serving as a police officer during 9/11. He explained that he patrolled a commuter parking lot and experienced what he called a “silence in time.” He said the cars in the lot seemed frozen, stuck in that moment. He thought about all of the people in New York and wondered if the cars would remain empty in the lot or if their drivers would return home safely. He even remembered how many cars there were and what they looked like.

“We have not forgotten,” Wysocki said. “We have moved on and rebuilt, but we will never forget as a community.”

Schepisi, who represents parts of Bergen County that include Mahwah, said she came to honor the 750 New Jersey residents killed in the attack, 147 of them being from Bergen County.

“Like many people, I lost loved ones, friends and colleagues 21 years ago yesterday,” she said.

She told the story of how she was in the Chrysler Building working as a corporate lawyer the day before the attack. Her workday finished with a late conference call. It is her last memory of half of the attendees who returned to the building on 9/11.

She also shared a story of hope and optimism. 24 days after the attack, she and her family attended the first home game for the Yankees after 9/11. At the game, people came together to mourn those who were lost but also celebrate the bravery of the first responders who risked their lives to save others.

“We refused to let what happened 24 days ago keep us from living life as normal,” she said.

Tedesco was the last speaker. He reflected on his time as a firefighter who volunteered in New York City and how we view 9/11 now. He said that once he exited the Holland Tunnel, he saw the cloud of dust that had gathered around the city. He was shocked by the sight because, four days prior to the attack, he had been at the World Trade Center and felt that the building could withstand anything. He compared the efforts of the first responders to Pearl Harbor, saying there were “heroic actions of similar magnitude.”

He also commented on how important it is to memorialize the events of 9/11, especially for many Americans who were too young to remember or those who were not born yet.

“It’s days like today where we need to make sure that young people understand what it means for us,” he concluded.