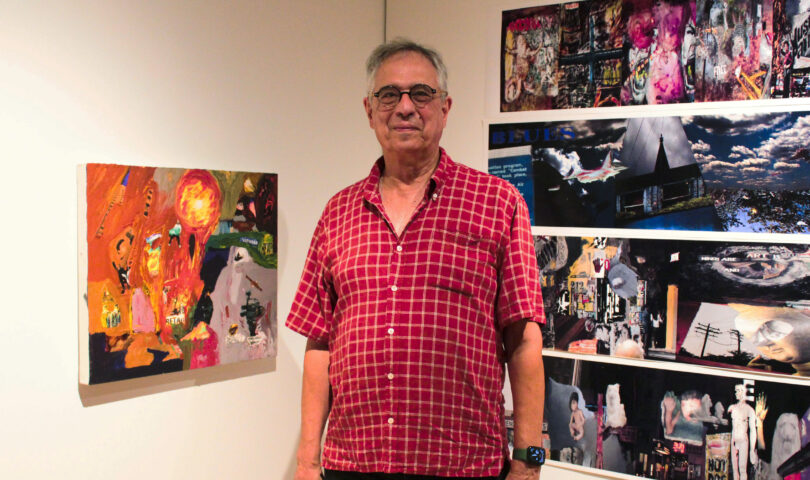 Ramapo College’s visual arts professors look forward to retirement because, in addition to the usual benefits, they receive an opportunity to showcase their work where they once taught. On Sept. 14 at 5 p.m., Professor Shalom Gorewitz unveiled “SHALOM GOREWITZ: EXITBITION” in the Kresge and Pascal Galleries at the Berrie Center. The pun is a window into Gorewitz’s personable style.

Gorewitz taught art and cultural theory courses at Ramapo from 1982-2022. His creative expertise is expressed in a variety of mediums, including animation, acrylic painting and digital photography. Though diverse in form, the pieces are cohesive in their themes.

During the Artist’s Talk, Gorewitz described how living near the site of 9/11 and knowing multiple victims drove him to create several of the displayed pieces. Together, they explore the experience of reckoning with loss and reconnecting with one’s faith after a tragedy.

“After 9/11” is a photoshopped abstract depiction of people emerging from the smoking ruins of the tragedy. The blurry figures are swathed in black, gray and brown streaks.

“Psalms,” a series of three inkjet prints on glossy photo paper, pairs serene images with quotes from their namesake.

Religious iconography and allusions were present throughout the exhibit. The Star of David was visible in several collages. The mixed media collage “Lao Tzu is Not a Jew” referenced both Judaism and Taoism. Next to it, another collage titled “Ancestors” alluded to the story of Lot in Genesis.

When asked about his consistent use of text in his work, Gorewitz said, “I have a storytelling gene in me.” Words have become an accepted part of postmodern visual arts. The results, as seen in his own art, are impactful.

Gorewitz’s desire to instill “a sense of motion” in each piece shone most clearly in “Scrolls,” another series of prints that burst with color and gritty urban subjects. The neon green and pink graffiti in particular caught attendees’ eyes.

In the center of the main gallery, a white table held different devices for storing videos, collected from 1967-2022. There were 12 altogether, the oldest being a Fujifilm H621 videotape and the most recent being a 32-gigabyte USB flash drive. The collection’s title was self-explanatory: “Video Formats.”

Two areas were dedicated to showing short videos and animations Gorewitz created over the years. They varied in subject matter, but all had surreal effects on the viewers.

One video switched between distorted clips of sea creatures and human inventions, with facts about the global water crisis crawling along the bottom of the screen in white text. Another was characterized by a visual effect that mimicked rippling water and quotes from works by authors such as Rachel Hadas, Sappho, Peter De Jonge and Shakespeare. Yet another included footage of a woman standing in shallow seawater backed by flutes and sound effects better suited for a work of science fiction.

During his talk, Gorewitz expressed his appreciation for all of the people who made his exhibit possible. Various coworkers and students he met during his time teaching at Ramapo helped him troubleshoot technical issues, supported his desires to explore new mediums and overall made his years at the college fulfilling. He would not have become the man they saw today without them.

When Gorewitz finished his Artist’s Talk and opened a question and answer session, one of the first inquiries was whether or not he planned on continuing to create art during his retirement. Gorewitz smiled and responded, “Oh yeah, I hope so.”