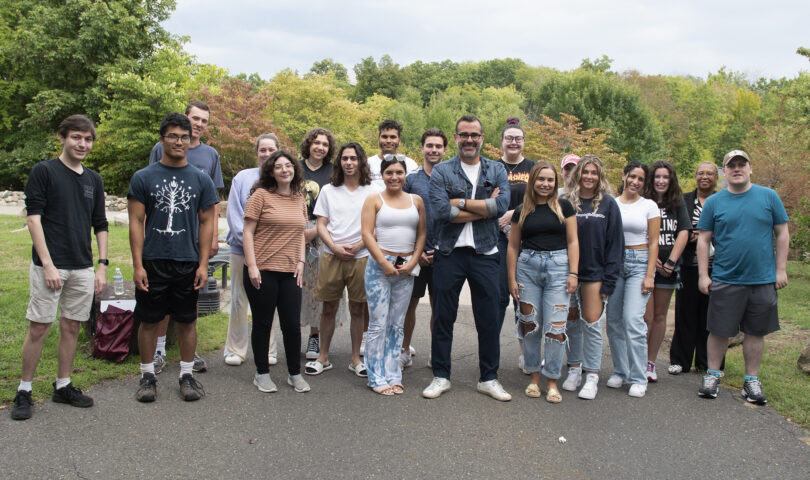 At the start of his senior year of high school, New Jersey native Shane Farley sat beside his father and a high stack of essays while he laced up his sneakers to go play basketball. He watched his father, a high school teacher, flip through the papers and almost effortlessly grade each one. This was the first time Farley ever questioned the way thoughts and ideas were judged.

“You know, Shane,” his father told him back in 1990. “The thing is that you read enough of these papers and you just know where the grade sits. But every once in a while, there’s one student who looks at whatever they’re writing about, and they come at it from a completely different way than everybody else.

“That for me is a treat… and that person gets rewarded,” he continued.

The next day in class, Farley was asked to write about the country’s biggest injustice. Rather than writing about the War on Drugs like most of the class, he cleverly wrote about presidential pardons, which earned him an A and the confirmation that his father’s ideology was right.

Ever since that moment, four-time Emmy Award winning TV producer Farley knew exactly who he wanted to be and how he would achieve his dreams — by taking an idea and always coming at it with a passionate, creative approach. His determination and creative thinking have certainly paid off, as his career in the industry, specifically daytime television, has already been remarkable, and he is continuously challenging what has already been done.

Now in 2022, Farley visited Ramapo on Sept. 19 to meet with students and share insight on his career. He spent the day chatting with communications and marketing classes, exploring both the new and timeless features of campus. He said that the Fishbowl looks the same as it did when he graduated in 1994. He also met with RCTV, which he was involved with during his time here.

“I was fortunate because I got into [the industry] relatively quickly, so I had a lot of success early on,” Farley shared. “I had already won an Emmy in my 20s and I had four Emmys before I even hit 40.”

Farley has worked for a number of hit TV shows, including “The Rachael Ray Show,” “The Steve Harvey Show” and VH1’s “Big Morning Buzz Live.” He hustled his way up the chain of command on sets, eventually becoming a showrunner, which is “the top job.”

“I didn’t have difficulty early on because I worked so hard,” he said. While interning at “Geraldo” and “Regis and Kathie Lee” his senior year, he landed his first job at “The Joan Rivers Show” halfway through his internship, before he even graduated. Amongst his excitement, however, came devastation because the executive producers at “Live With Regis and Kathie Lee” told him if he left early he would not receive his college credit.

“I thought, ‘I don’t know that I’m ever gonna get this opportunity again. This is my first shot.’ So I came back to campus, and I was heartbroken,” Farley said. “I went to tell the story to the gentleman who was in charge of all the internships, and he said, ‘Shane, that show doesn’t give you credit, I give you credit.’”

Farley was instructed to write the intern reflection paper and take the job, and he received the college credit.

“Ramapo had my back,” Farley shared, reflecting on the moment of his college career that stood out most to him. “They didn’t necessarily help me get the internships, but when I needed the school most, to let me go and take this opportunity, they were there for me, and that’s why I never forgot.”

“So for me, coming back here, it’s like why would I not come back? It could be a pain for most of the students that have to hear me talk, but it might help one student,” Farley continued. “I have to do something because Ramapo had me when I needed them, and I’ll never forget that.”

Since that early success, Farley shared that his biggest difficulties came within the last few years. Now at 50 years old, Farley is well aware of the ageism in this “very young business.” Getting jobs now requires more effort on his end, as when he was younger, he received calls from shows that wanted him. Now, he has to be the one to reach out.

To push himself back to success, he had to use those creative thinking skills and come up with something that hasn’t been done before — and make it good. Farley is now preparing for his upcoming project, “Brunched by an Angel,” a Las Vegas stage show that serves the audience brunch while a live band plays and three psychic mediums come out to connect audience members with loved ones who have passed away. The Las Vegas residency at Palms Casino Resort will be officially announced in October and begin in November.

This is unlike anything Farley has done before, but he is excited for this new chapter. It might not be exactly what he planned on doing, but having optimism, constantly pushing himself to produce new, exciting ideas, and having the confidence that the ideas are worthwhile is exactly what can make a student from Ramapo College a powerful, successful force to be reckoned with.