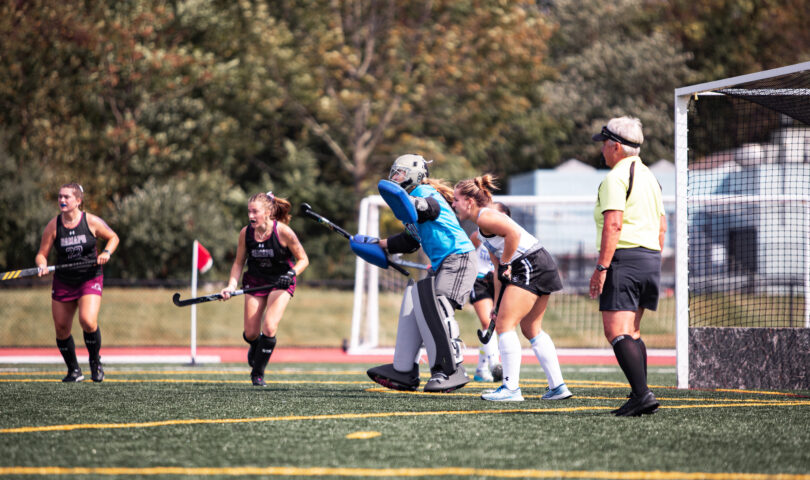 The Ramapo College field hockey team lost to Vassar College on Saturday by a final score of 3-1. The loss put an end to the Roadrunners’ four-game win streak, which included victories against Lasell University, Albertus Magnus College, FDU-Florham and Western Connecticut State University. The loss moves Ramapo to a 4-2 record on the season and raises Vassar’s record to 5-2.

Vassar opened the scoring early with a goal from Gianna Trunfio, assisted by Adah Anderson. The Roadrunners were able to outshoot Vassar in the first quarter, but Trunfio’s goal ended up as the only score of the first three quarters.

In the third minute of the fourth quarter, Leilani Llamas was able to add a second goal for Vassar off a pass from Max Meijaard. The goal came off of Vassar’s lone penalty corner of the quarter.

Ramapo’s lone goal came from Emily Ricciardi on a rare second penalty shot. The Roadrunners — facing a two goal deficit late — were awarded a penalty shot after Victoria Docherty was fouled on a penalty corner. Docherty missed her penalty shot, a rarity for her, but due to an infraction by Vassar goaltender Sarah Dumaresq, the Roadrunners were able to send Ricciardi out for a second opportunity to score.

Ricciardi sent her second goal of the season through the posts, pulling the Roadrunners to within one score. The hope for Ramapo did not last long, however, Vassar’s Jaclyn Narleski was able to score the final goal of the game off a pass from Sam Kass.

Ramapo was outshot 16-10 in the game but was given plenty of opportunities to even up the score. Shots were even in the second half, and neither team was able to dominate time of possession.

Roadrunner goalkeeper Michelle Kukan allowed more goals in Saturday’s matchup than she did in Ramapo’s first five matchups of the season combined. Kukan, a sophomore, saved four shots on goal, giving her a 57.1 save percentage on the day.

Not including the two penalty shots, Ramapo was only able to manage two shots on goal for the entire game. This was new territory for the Roadrunners this season, as they had been averaging 16.8 shots on goal per game entering Saturday.

The loss drops Ramapo to third in the New Jersey Athletic Conference, trailing the undefeated Rowan University and Kean University. The Roadrunners will have their next opportunity to bounce back on Saturday, Sept. 24 at Connecticut College in New London. Ramapo’s next home game will come on Saturday, Oct. 1 against Montclair State University.