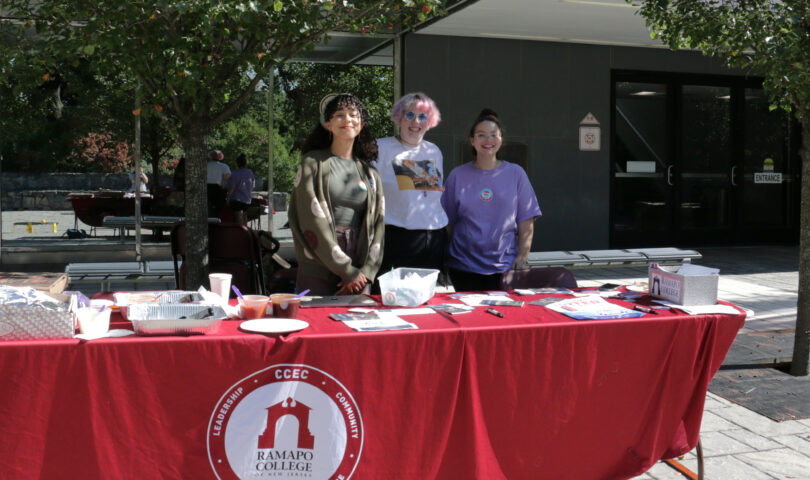 The holiday originated in 2012 “to create broad awareness of voter registration opportunities.”

Ramapo College’s Civic & Community Engagement Center (CCEC) participated by providing free food, games and resources aimed at helping students who plan to participate in the upcoming election register to vote. The college partnered with the Andrew Goodman Foundation (AGF) for this event and previously for similar voting initiatives.

Senior Sydney Karlin, Ramapo’s senior ambassador for the AGF, summarized their work as partnering with campuses nationwide to increase voter registration and combat social justice issues such as voter suppression. She encourages her peers to register to be politically active.

Some students who accepted the free food remained unmoved by Karlin and the other event staffers’ enthusiasm.

“I’m not so into politics,” said freshman Jude Wisman-Raven when asked why he declined to register. “I don’t know, I just never had an interest in them.”

Ramapo’s student body has a voter turnout rate that is higher than the national average: 77.1% compared to 66% as of the 2020 presidential election.

Karen Booth and Dylan Heffernan, the coordinator of civic and political engagement and the assistant director of Ramapo’s We Care Program respectively, credited this statistic to the work of CCEC and the recent political climate. They encouraged students to bring this energy to elections that do not receive as much media attention.

Booth cited less press coverage and recent redistricting as reasons for the reduced voter turnout. It is easy to get confused about what district one has been reassigned to, and what ongoing local elections they can participate in. CCEC employees bridge the gap by researching the answers to students’ questions.

Campus organizations can also benefit from student involvement in politics. Booth gave an example. “If the New Jersey State Legislature looks at food insecurity… and they see how this issue isn’t just hitting families in their homes, but it’s also hitting college students, and then they correlate that with an increase in college students voting, then we could possibly get more resources to support students who are dealing with food insecurity here on campus.”

Event handouts included pocket-sized copies of the Constitution, stickers with political messages and informative handouts about the Youth Voting Rights Act. If made law, the act would expand voting rights in several ways; most notably, it would establish polling places at public colleges and universities. This would increase college-aged voters’ access to participate in politics.

Until then, a secondary purpose of National Voter Registration Day is to ensure people have concrete plans to vote. Associate Director of the Center for Student Involvement Eddie Seavers, who worked with the AGF in the past, described how a student with a packed class schedule on Tuesdays can still vote if they know the rules of mail-in ballots or if their county offers early voting.

The CCEC staff works to ensure this information is readily available to students so their generation is not excluded from politics. Booth said, “When young people make their voices heard, then the people who we elect pay more attention to them.”