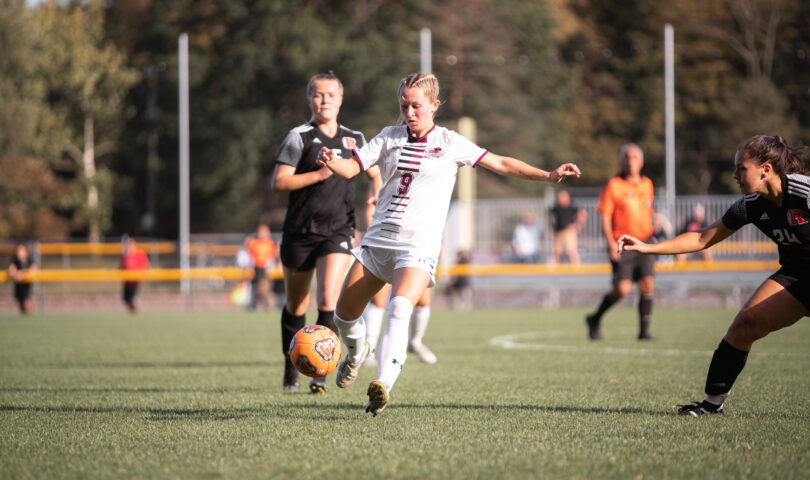 The Ramapo College women’s soccer team won 4-0 on the road this past Saturday against Neumann University.

The first goal for Ramapo was unassisted and scored by Shayna Kenduck in the 23rd minute of the play. The Roadrunners scored another goal in the first half by Emma Piskaldo, which was assisted by Sam Ingannamorte. The goals scored by Kenduck and Piskaldo were both their first goals of the season.

The Roadrunners continued scoring in the second half of the game while keeping the Knights off the board. Carla Goodwin scored back-to-back goals within 10 minutes, one of them with an assist from Ashley Agrillo. Goodwin leads the Roadrunners in goals scored this year, totaling seven throughout the season so far.

The defense held strong for the Roadrunners thanks to two dedicated Ramapo goalies. In the first half, Emma Conlan recorded one save on three shots, and in the second half, Makenna Tahbaz posted three saves on four shots. The Roadrunners’ offense outshot the Knights 20-7, including 11-4 shots on goal.

“Something that our team is taking away from this win is confidence,” Goodwin said following her two-goal performance. “Our conference play is starting up soon and winning our next game on Wednesday and going into our conference games with some wins under our belt will give us the confidence and momentum we need to do well in the NJAC.”

With this win, the team moved to 3-2 on the season. They will play again at home on Saturday, Sept. 24, at 1 p.m. against The College of New Jersey in the team’s first New Jersey Athletic Conference (NJAC) play this season. This will be the Roadrunners’ first of three NJAC games in a row. Ramapo plays an away game against Rutgers University-Camden on Sept. 28, then returns home to face Montclair State University on Oct. 1.