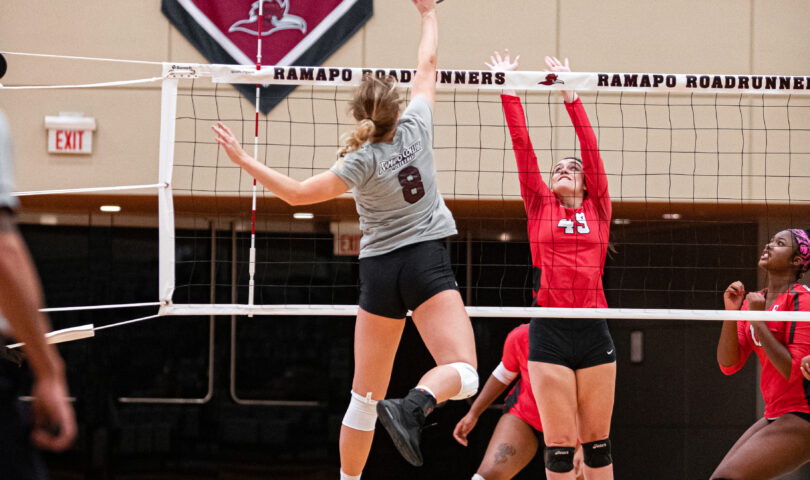 The Ramapo College women’s volleyball team had a successful week, winning two of three matches, including a pair of 3-0 victories at a tri-match at Albertus Magnus College on Saturday afternoon.

The Roadrunners’ first win came against Sarah Lawrence College. It was won in convincing fashion with scores of 25-12, 25-18 and 25-16. Senior Stephanie Ross led the way with seven kills. Right behind her were Amanda Fatouh, Riley Stewart and Caleigh Golabek, collecting six kills each.

Fatouh, Golabek and Alexandra Sacchinelli each had three aces, putting them in a three-way tie for the team-lead. Golabek also had a staggering six blocks to lead the team. On defense, Emma Moran led Ramapo with 11 digs and Ross was right behind her with 10.

In the first match, Ramapo hit .256 as a team, collected 29 kills on 82 attempts and committed eight errors.

The team’s second match of the day was against Albertus Magnus College. The Roadrunners continued to demonstrate their dominance. Ramapo once again won in a convincing 3-0 sweep by final scores of 25-12, 25-14 and 25-16.

Golabek shined in this one, collecting 10 kills, seven digs, six aces and a team-high four blocks. Following up Golabek was Naja Satchell with three blocks. Katie Bishop led the team in assists in the match with 14, giving her a collective 24 on the day. This just barely edged out Sacchinelli, who finished the day with 21.

Other players of note in the second game were Ross, who finished with nine kills to give her 16 in total, and Stewart, who recorded eight. As a team in the second match, Ramapo hit .318 — which was a season-high — with 40 kills on 85 attempts.

On Tuesday, the team returned home to the Bradley Center to face the visiting Montclair State Red Hawks for its second New Jersey Athletic Conference (NJAC) match of the season. The team’s luck was not as good this time around, and they lost a heartbreaking match 3-2 by set scores of 16-25, 25-18, 22-25, 25-19 and 10-15.

Ramapo showed resilience throughout the entire match, coming back to even the score twice before eventually losing in a fifth set that ended their night. Golabek led the team with 17 kills in this match while also recording five blocks. Ross led the team with 21 digs in addition to her 10 kills and three aces. Sacchinelli led the way with 19 assists along with three aces. As a team, the Roadrunners recorded 42 kills.

Ramapo’s record now stands at 5-2 and the team will be returning to action on Thursday, Sept. 22 at 7 p.m. as they travel to Camden to take on Rutgers-Camden. It will be the team’s second straight NJAC match and its third this season.