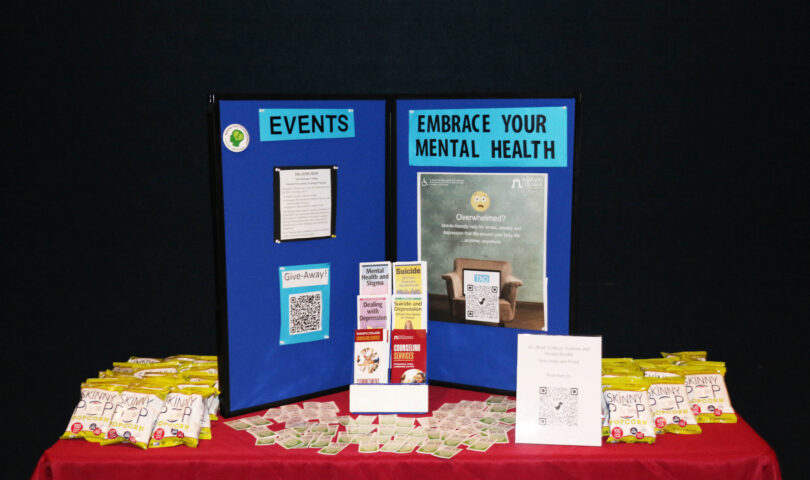 The Center for Health and Counseling Services (CHCS) held a screening of “It’s Real: College Students and Mental Health” in Laurel Hall on Sept. 28. The event comes at the end of Suicide Prevention Awareness Month.

Megan Johnston, the health educator with CHCS, said the goal of the event was to “decrease the stigma around talking about these topics.”

“It’s okay to talk about suicide, to ask someone if they’re having thoughts so we can all be better allies in mental health,” Johnston said.

Before presenting the film, Johnston opened with the statistic that around 1,000 college students die by suicide each year. She specifically omitted the word “commit” as she noted it’s important to use the correct language when talking about suicide.

“Saying commit sounds positive,” she said. “By calling it a suicide death, or die by suicide, you’re really focusing on the fact that someone has lost their life.”

The film, produced by the American Foundation for Suicide Prevention, follows the journey of six college students as they battle through the many different adversities college life can present for students.

“It’s Real” spotlights grades, household issues, homesickness and the transition to college as some of the causes for depression, anxiety and suicidal thoughts among college students.

The film makes it clear that anyone can seek help, no matter your situation, and that it’s important to do so before something drastic happens.

After the film, a panel led by Director of CHCS Dr. Judy Green and seniors Gabriella Fonseca and Bryan Martinez answered questions from Johnston about their experiences with Ramapo’s counseling center and being a college student battling mental health issues.

Green was the first to speak, talking about Ramapo’s counseling center. She said that from Monday to Friday students can walk in between 1 and 3 p.m. without an appointment.

“Students can be seen for any kind of problem, from a roommate conflict to depression to having a bipolar disorder,” she said.

She noted how the counseling center has their students fill out a symptom assessment form before each appointment, and are able to compare their numbers nationally.

“We are relatively similar in the presentation of clinical depression,” said Green. “Our anxiety was higher, our students presented that 59% of them had elevated anxiety compared to 51% nationally.”

“That’s a concern for us,” said Dr. Green. “We want to reiterate the message that help is available and no one should be alone.”

Fonseca and Martinez both opened up about experiences battling mental health issues at Ramapo and their experiences with the counseling center on campus.

Fonseca, a transfer student, spoke about her experience at her prior school, and what steps she took to seek help.

“I reached out to my professor and that’s where it all started,” said Fonseca. “I started going to counseling services at my community college… When I came to Ramapo I took a little break. I thought everything was okay, but then I started seeing the warning signs again, so I went to the counseling center here.”

Martinez spoke about how the counseling services helped him get through a very difficult time in his life.

“When traumatic things happen, sometimes you need to talk about them, you have to make sure you know how you feel about them instead of pretending it didn’t happen,” said Martinez.

“That’s why I encourage everyone to go to therapy, because you just never know what you’re going to find out,” he continued.

The event highlighted the importance of seeking counseling, opening up and being a mental health ally. The counseling center is located in D-216 of the academic complex, and their hours are Monday through Friday, 8:30 a.m. to 4:30 p.m..