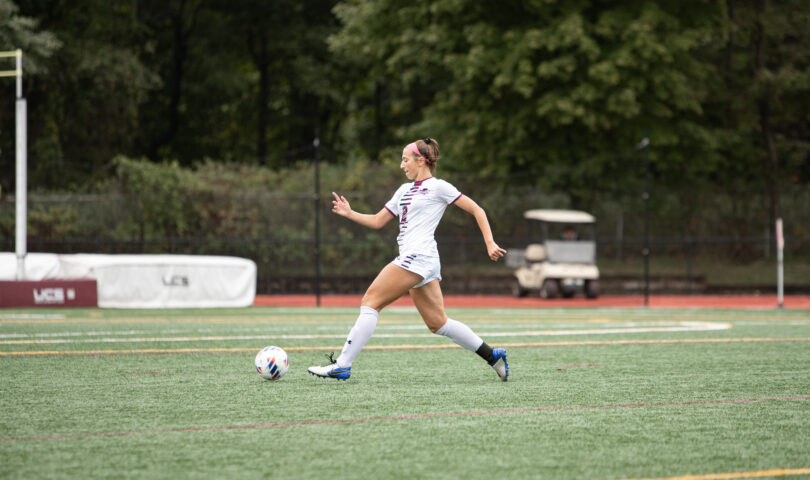 On Saturday, the Ramapo College women’s soccer team was defeated 3-1 at home by Montclair State University (MSU). The Roadrunners fell to 3-5 overall and 0-3 in conference with this loss. The Red Hawks remain undefeated with a perfect 10-0 overall record and 3-0 in conference play.

In the first four minutes of play, MSU scored with a goal from Emmi DeNovellis. It was DeNovellis’ first goal of the season, as she netted the ball in the top corner of the goal from 30 yards away. Her teammate, Tara Lambert, then scored off a pass from Aileen Cahill to give the Red Hawks a 2-0 lead.

Ramapo came out in the second half with a hunger to score. Lauren Vladyka scored for the Roadrunners off a corner kick from Sam Ingannamorte to make the score 2-1. This was the first goal MSU gave up in New Jersey Athletic Conference (NJAC) play this season.

However, the Roadrunners did not score again, and the Red Hawks’ leading scorer, Cahill, netted another goal on a penalty kick for MSU to make it 3-1.

“While the outcome of this game was not a win for our record, we had a lot of takeaways. Montclair is one of the top competitors within the NJAC,” said Vladyka. “We were able to compete with them throughout the entire game and showed lots of success. We are continuing to work together and grow from these very competitive games. Every minute within the game is equally as important and we use the opportunities we find ourselves in to make something happen.”

“Even when we were down 2-0 after the first half, we continued to play our game to put one in the back of their net,” she continued. “This hard work allowed us to keep them in a tight game and shows us that our dedication to the game and teamwork will pay off.”

As for their focus moving forward, Vladyka said, “Our focus for the rest of the season is working as one. As a team we are working to use our voices, win each battle, and take advantage of opportunities.”

“This week we have the full week to recover and train tactically to find a balance to use the full 90 minutes to our advantage. We are ready to use what we learned throughout the season so far to become stronger. We are excited to be back in action this Saturday,” she said.

The Roadrunners play again on Saturday, Oct. 8 at 1 p.m. in an away game against New Jersey City University (NJCU) in another conference match-up. NJCU is currently 0-3 in the conference.