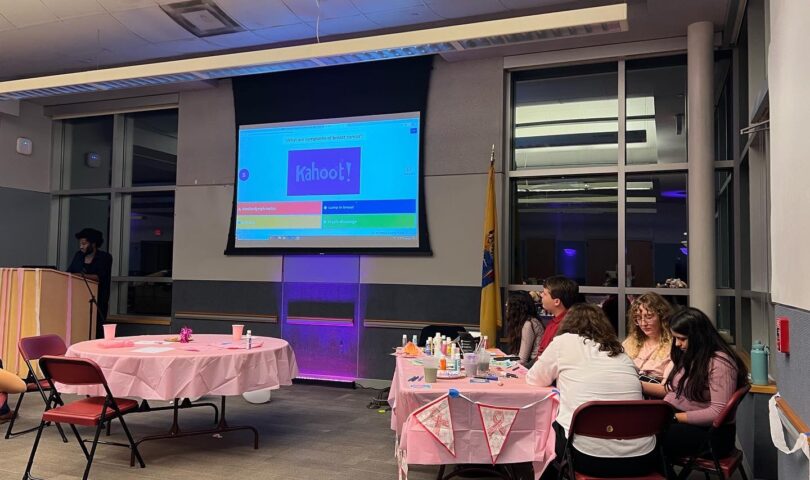 The event, as in years past, was not only educational but tons of fun too. A lot of students showed up, all dressed in amazing outfits. The dress code was optional, but most attendees wore their finest attire.

There were games such as Bra Pong and Jenga, and after every game, attendees were awarded raffle tickets that could be put towards prizes that ACS was offering. These prizes included two pink cow Squishmallows, a pink-themed basket and a JBL speaker. Along with the games, there was a DJ, all pink candy and food from three local restaurants– Nicky’s Pizza and Deli, Jun Lung and Paula’s Soul Food Cafe. There was even a Kahoot game near the end of the night, and everyone’s competitive spirits made an appearance. The Kahoot questions were all based on breast cancer trivia. Did you know that breast cancer is the most commonly diagnosed cancer in women?

The entrance fee for the event was $5, which may seem like a small price to pay, but those ticket sales add up. The American Cancer Society at Ramapo College raised $830 from donations at the formal, and that money will go towards their Relay for Life goal of $25,000. The Relay for Life event will be held in the Bradley Center on March 21, 2023, from 6 p.m. to 6 a.m.

“We’re all really grateful for all those that came out and donated. We hope to see everyone again next year!” said Agata Srodon, president of the American Cancer Society at Ramapo College.

If you or a club on campus is interested in participating in Relay for Life, reach out to @ramapo_acs on Instagram.