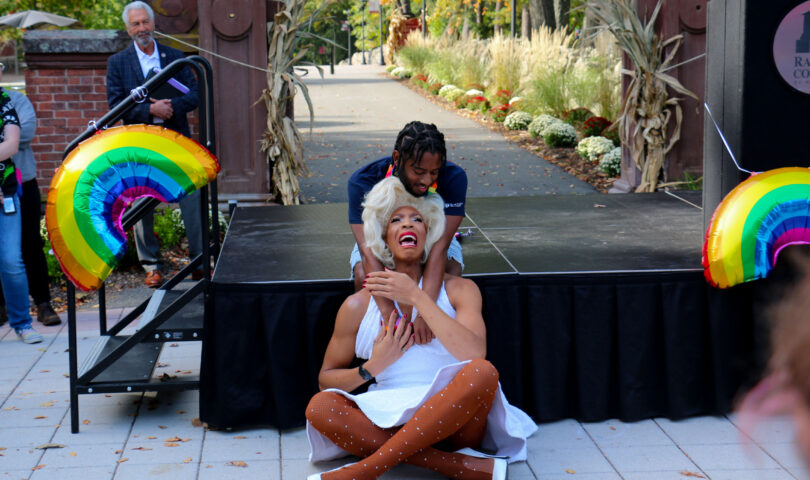 Ramapo hosted its fifth annual Pridefest on Oct. 12 in the Grove in honor of Queer and Trans History Month. The event – hosted by the Women’s Center and LGBTQ+ Services – included various information tables, games, food, music and a performance by New York-based drag queen Marilyn Monhoe.

The diversity of the Ramapo community was on full display, as students and faculty celebrated the many different groups on campus, signifying how much the event meant to those involved. Among those to take part in the festivities was President Cindy Jebb.

“It’s important that we come together to celebrate and value each other, and it’s important that every community is heard and celebrated,” said Jebb. “You can’t manufacture such a beautiful day with what we’re celebrating and how nice the weather is.”

Attendees took part in LGBTQ+ trivia, participated in raffles, consumed free food and danced to music to celebrate the day. “I think it’s really cool that the college hosts stuff like this. It makes me feel really included and it’s cool to be here,” said senior Ashley Dixon.

Malik Moore, representing the Ramapo College Progressives table, spoke on how much Pridefest means to the students. “Pridefest helps you see the visibility of LGBT and queer people on campus. It’s important to have that representation so you can feel comfortable at your school and feel safe to express who you are,” he said.

Alex Woods, the coordinator of the Women’s Center, addressed the crowd to talk about how meaningful this event is. “The continued strength and perseverance demonstrated by the LGBTQIA+ community has brought us together today to celebrate our individuality, our intersectionalities and what unites us as a collective,” they said.

Woods continued, “During this month and the months to follow, I ask that we as a collective begin to think beyond allyship and reflect on how we can become co-conspirators in the continued liberation for all LGBTQIA+ communities.”

Theodore Bell, the student trans outreach coordinator on campus, spoke about the significance of the event to the college. “There are a lot of LGBTQ+ identifying students on campus and Pridefest is important because it’s a day for everybody to feel seen and welcomed,” he said.

The highlight of the day was the electrifying drag performance by Monhoe. She made those in the audience laugh, cry and dance along with her as she interacted with the students and performed showtunes.

Monhoe invited students up on stage as part of her act, creating a welcoming atmosphere while also bringing a unique sense of humor. At one point, Monhoe jokingly stole a student’s electric scooter, riding across the Grove in her high heels.

“Y’all don’t know how much it means to me that you invite this six-foot-seven black woman to perform every year,” said Monhoe. “I love you all so much even though this world sucks and people suck.”

Monhoe ended her show by taking pictures and speaking with students, spreading love and inclusivity, and announcing that she will be putting on a holiday show at Ramapo this winter, news that was met with a roaring cheer from the audience.

Pridefest displayed how important inclusivity, diversity and equity is to the Ramapo community, and the performance by Monhoe was the perfect representation of those values on campus.