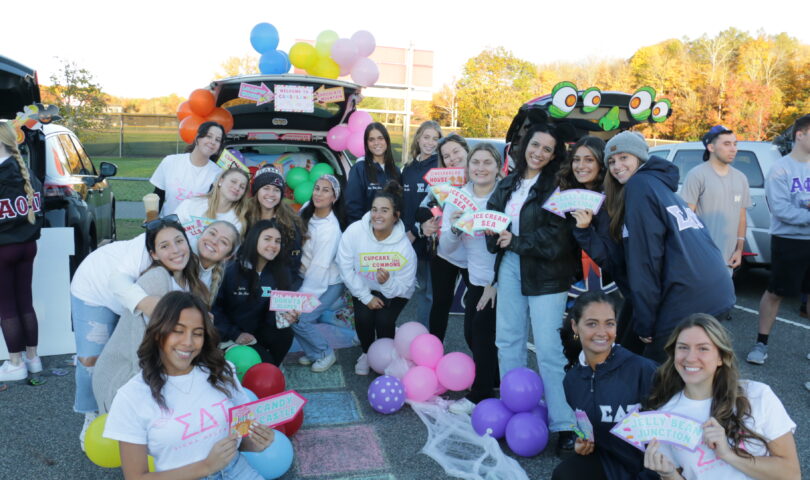 Ramapo’s tennis court parking lot was buzzing with excitement as clubs, campus organizations and Greek life got in the Halloween spirit for the seventh annual Trunk or Treat by dressing up and decking out their cars to hand out candy to local children. The event on Thursday was sponsored by the Center for Student Involvement.

Under the setting sun that lit the orange and red leaves on the mountain aglow and with festive music blasting through the speakers to set the mood, children and their families wandered through the lines of about 30 cars. The majority wore classic costumes – princesses, superheroes, animals – although a few were fairly eccentric, such as an inflatable toilet bowl.

Coordinator of Student Activities Jack Nesmith and Assistant Director for Student Involvement Amanda Riehl co-lead and run the event annually. Nesmith stood at the welcome table, greeting families as they entered, complimenting children’s costumes and fielding questions, all with a smile on his face.

“We invite local elementary school members… in addition to faculty and staff on campus from the Ramapo community to bring their little ones to enjoy a safe, positive and fun Trunk or Treat experience,” he said. “It’s been a great Ramapo tradition.”

Ramapo students and staff got creative with their decorations. While some stuck with a general spooky theme, others went specific, gathering inspiration from popular movies and games, and even tying it back to their club or organization. Here are five of the most notable cars that were dedicated to bringing smiles to children’s faces:

Ramapo College Television was inspired by Minecraft, crafting their own Creepers, torches and other iconic symbols from the video game.

Sigma Delta Tau decorated their car after the board game Candy Land, drawing colored squares on the ground leading to their trunk and holding signs that read “Candy Castle” and “Ice Cream Sea.”

Disney Club hung up a banner and wore shirts with Jack Skellington on it to honor Disney’s “The Nightmare Before Christmas.”

A Moment of Magic, a club that dresses to visit underserved and medically-vulnerable children, stole the spotlight from their car as they wore their costumes of well-known Disney characters, which made children squeal and run over.

At the end of the event, two cars– one Greek life and one club– were selected as winners and awarded money towards their raised revenue accounts to host events on campus. This year, the club winner was A Moment of Magic and the Greek life winner was Sigma Delta Tau.

While the prizes were great, Nesmith stressed that the Ramapo community coming together to create a fun, safe and spooky environment was the real purpose of the event.

“Trick-or-treating is such a great tradition, and kids love it. We wanted to do something that not only shows that we want to give back and support others, but it’s a great way to build community,” he said.