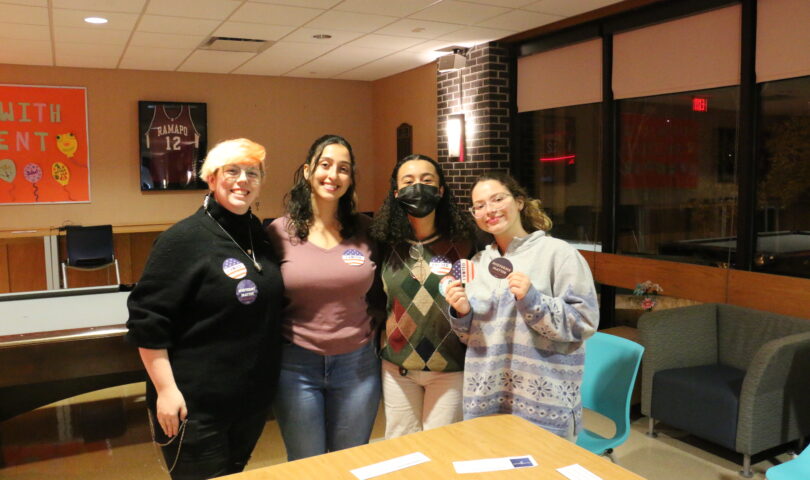 In anticipation of the results of the 2022 midterm elections, the Civic and Community Engagement Center (CCEC) hosted its Election Night Watch Party. The event takes place each year, whether elections are national or local for New Jersey. Although students from all sides of the political spectrum were gathered in J. Lee’s for free food and election outcomes, the highlight of the night was the nonpartisan discussion attendees had about why they voted and what can be done to improve voting for Ramapo students.

“Even if you think your vote doesn’t matter, sometimes when you look at it, the votes aren’t always close within one vote, but at the same time, you never know,” he told The Ramapo News, referencing the outcome of the 2000 election where George W. Bush won Florida by less than 600 votes.

As a resident of New York, he said he paid particular attention to the New York governor race between Democrat Kathy Hochul and Republican Lee Zeldin. The Associated Press called the race for Hochul with 94% of the votes counted as of the time this article is published.

Moss Killion, the student coordinator for the CCEC’s We Care Program, said he voted with a mail-in ballot and has always been civically engaged.

They said voting for college students is especially important because higher levels of government have a lot of people who are older. The college-age demographic “seems to get pushed under the rug and not viewed as decision-makers,” but a shift is happening and younger voters want to make their voices heard so they can decide the laws that will shape their future. He watched races centered around education and LGBTQ+ issues in particular.

Dean Jigarjian had a similar opinion to Killion when it comes to why it’s important for students to have their voices heard.

“People in our age group vote less than people in the age group of people over 35. So, our voices hold less sway in the very end in all these races. So it’s important for us to vote to at least get the same turnout as other groups, but also because we are young, we are the ones that will be here in 30, 40, 50 years,” he said.

The races he watched closely were the Pennsylvania Senate race between Republican Dr. Mehmet Oz and Democrat John Fetterman and the Georgia Senate race between Democrat Raphael Warnock and Republican Herschel Walker. The Associated Press called the Pennsylvania race for Fetterman, and the Georgia race has advanced to a runoff because neither candidate received a 50% majority vote.

After students had time to mingle and complete activities like crossword puzzles, Sydney Karlin, the student political and civic coordinator for CCEC and the Andrew Goodman Foundation student ambassador for Ramapo, hosted the group discussion. J. Lee’s became a safe space for people to share their feelings on voting.

“Everything is political in some way, shape or form whether you want it to be or not,” Karlin said.

First, attendees all shared why they voted and why they feel voting is important. Those reasons included raising voting rates for younger age groups, making your voice matter and be heard, exercising a right that some other countries don’t have and being engaged in the community.

The topic shifted to what changes resident students think would make it easier for them to be able to vote. Two common concerns students had were the complexity of mail-in ballots and finding a polling place. Some students talked about the difficulty of driving back home to their polling places, which can be time-consuming depending on the length of the drive. Others struggled to find polling places near Ramapo.

Some attendees agreed with that sentiment and said having a polling place on campus would be helpful. Another group addressed concerns on how to send in a mail-in ballot, and some also expressed how difficult it can be to research all of the candidates in an election.

Karlin provided solutions to a few student issues. On the topic of mail-in ballots, she said the CCEC accepts students’ ballots and will mail them out for them. For researching candidates, she shared the website Vote411, which allows voters to enter their address and get information about their polling place, the elections in their area and brief biographies about candidates and the issues they are campaigning on.